Yes. This is so as the Jewish writer and Holocaust-survivor Elie Wiesel so powerfully and cogently demonstrates in one excruciating story in his memoir of the Holocaust—Night.*


How can there be good-evil?

Yes what an oxymoron.

What a contradiction and ethical absurdity where human grieving never ceases.

At first, all of this may seem like past history. Most people know about the Shoah (Holocaust). And many probably have heard of "Good Friday" since it still occurs on calendars. But nowadays most people put little focus on history unless forced to do so, and most work or study or spring-break party right through “Good Friday,” unless they are devoutly liturgical in their religion.

Years ago back in the 1950’s in the Midwest, all religious people commemorated the special Friday, and many attended very long services. I remember as kid sitting through 3-4 hour services where 4-5 ministers took turns preaching on and on. But that was then, this is now.

Looking back on that yearly event now seems very strange: how those religious leaders taught us about the torture and execution of a Jewish leader by the Romans 2000 years ago and why it was vitally important to us, even elementary children.

Even more baffling—at least to everyone not convinced of the Christian faith—is why speak to the general populace in the present of such a capital punishment by ancient governing authorities so long ago? And why claim this execution has anything, indeed everything, to do with humans today?

Last and most incomprehensible of all, why claim that this execution is “good”?!

How can moral evil, especially when conducted by civilization’s leaders ever be considered “good”?

How as human beings can we ever deal with moral atrocities—so many horrendous massacres throughout blood-gushed/disgusting history?

This is the beginning of the philosophical and ethical question that Elie Wiesel asked in his book Night, speaking of the murder of so many by the Nazi death camps including his father, mother, and sister: 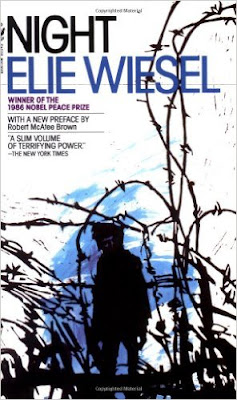 Then Wiesel tells the story of a young boy executed by the Nazis:
"The three victims mounted together onto the chairs. The three necks were placed at the same moment within the nooses. ‘Long live Liberty!’ cried the adults. But the child was silent.

"'Where is God? Where is He?’ someone behind me asked. At a sign from the head of the camp, the three chairs tipped over. Total silence throughout the camp. On the horizon, the sun was setting.

"'Bare your heads!' yelled the head of the camp. His voice was raucous. We were weeping. ‘Cover your heads!’ Then the march past began. The two adults were no longer alive. Their tongues hung swollen, blue tinged. But the third rope was still moving; being so light, the child was still alive..."

"For more than half an hour he stayed there, struggling between life and death, dying in slow agony under our eyes. And we had to look him full in the face. He was still alive when I passed in front of him. His tongue was still red, his eyes not yet glazed."

"Behind me, I heard the same man asking: ‘Where is God now?’ And I heard a voice within me answer him: ‘Where is He? Here He is — He is hanging here on this gallows'"

And I heard a voice within me answer him: "Where is He? Here He is — He is hanging here on this gallows..."

Posted by Daniel Wilcox at 1:02 PM