Throwing Stones from the Glass House of Christianity 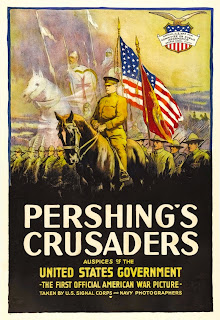 Then the unnamed author of R.of P.'s essay adds,
“In an article entitled, ‘Throwing Stones at the Quran from a Glass House,’ The American Muslim claims that the verses of violence and war in the Bible can be misread in ‘exactly the same way as some verses in the Qur’an’…In other words, the on-line magazine alleges that, like the Quran, there are Biblical verses with open-ended commands to violence that are not bound by historical context within the passage itself.

The R.of P. concludes, “Our first clue that this probably isn't true is the scarcity of Christian terrorist groups.”

The 30 Years War where Christians were responsible for between 7 to 11 million dead.


Forget about what Bill Warner asserts; it’s not true.

How could the Christians even dare to claim that?

Christian armies have been slaughtering and terrorizing others for 2,000 years! A tragic book not to be missed on this topic is Jesus Wars by Phillip Jenkins.

Christians intentionally killed hundreds of thousands of innocent civilians in the 20th century. 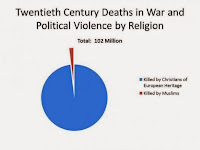 Of course, sometimes Christians and Muslims don't have a large army. So they fight individually.
As William Blum so poignantly emphasized, “A terrorist is someone who has a bomb, but doesn't have an air force.”

But usually the terrorists do have an air force and they bomb cities killing hundreds of thousands of innocent civilians (as the U.S. and other ‘civilized countries’ have done, in which case they claim they are conducting a ‘defensive just war’).

The Christian leader if he strikes first, and uses smart bombs, still isn't considered to be a terrorist but is called a Christian warrior like Joshua and David and Samson of old. Wait a minute! Those Old Testament leaders were terrorists! Think about Samson. He committed suicide so he could slaughter a whole temple full of human beings. Doesn't that sound like a suicide bomber of ISIS or HAMAS or the Taliban? 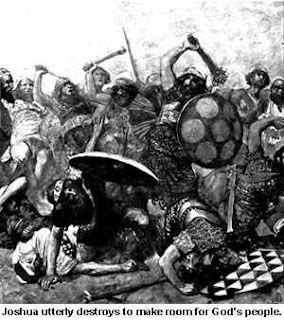 Then, however, the author at The Religion of Peace website writes, “Not too many people are losing their heads to fanatics screaming praises to Jesus…”

Evidently, he didn't grow up in the 1960’s. Christian leaders told us that we should go and kill Vietnamese. Everyone--EVERYONE--I knew said I should go and fight and kill for Christ! I still remember so vividly our Christian youth leader telling me personally that it was God's will that
I go and kill.:-(

There was only one exception; another teen at Youth for Christ told me they were wrong, that we should follow Jesus' way in the Sermon on the Mount. She was a lightwave in the Christian pro-war ‘ocean of darkness.’

The author of R.of P. and Bill Warner need to consider other examples from Christian history. 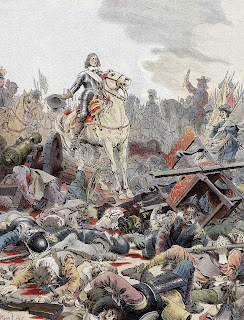 This verse was quoted by Christians at the start of the Second Crusade to motivate Christians to make annihilation war in the Holy Land! When Christians reached Jerusalem—let’s not deal with the thousands of civilians they slaughtered on the way there in a number of Crusades, including many Jewish persons and other Christians—when they reached Jerusalem, they murdered thousands. 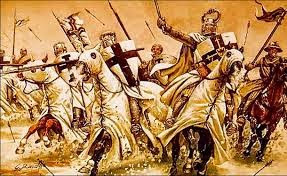 Then the author of R.of P. claims, “The reason is that no other religion regularly kills members of every other faith explicitly in the name its god.”

WHAT? Hasn’t the author heard of the religious wars of France where the Roman Catholics and Reformed slaughtered each other?

Or the invasion of Christian soldiers to the Americas?

Or the Great War?

Or what many millions of Christians say even today?

Why would a sensitive Christian leader in the 1980’s claim that God’s gift to America was the atom bomb?!

Then later R.of P. says, “By contrast, Muhammad was a military leader who killed people in battle, executed captives and enslaved women and children.”

Somehow, R.of P. seems to have forgotten about Joshua and Elijah, etc. Or consider the beloved David: “And David smote the land, and left neither man nor woman alive, and took away the sheep, and the oxen, and the asses, and the camels, and the apparel, and returned, and came to Achish.” 1 Samuel 27: 8-11

And that’s the horrific bad news, “the ocean of darkness.”

How about all humans stop killing each other. Don't kill for Christ or Muhammad, for Jehovah or Allah.

Take a vow of non-violence, justice, and peace, and live in compassion.