Chewing the Cud on Walden and "A Plea for John Brown"

Thoreau wrote, "I am glad to hear that you no longer chew, but eschew...
My excuse for not lecturing against the use of chew is, that I never chewed it...
though there are things enough I have chewed which I could lecture against."

So here I am chewing the cud on the writings of Thoreau. 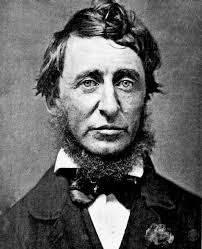 "To read well, that is, to read true books in a true spirit, is a noble exercise, and one that will task the reader more than any exercise which the customs of the day esteem."

"It requires a training such as the athletes underwent, the steady intention almost of the whole life to this object. Books must be read as deliberately and reservedly as they were written."
Thoreau, from Walden, Reading

After all, while cows need to chew their in-take twice, we humans can spend a life time
chewing repeatedly/many times over the various philosophical and ethical points writers have made.

Cows chew their cud for eight hours, chewing with almost 40,000 jaw movements in a single day.

Have you been chewing your reading?;-)

One famous line comes back to me as I sit here looking at the cabin that Henry built... 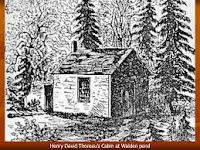 well, actually, only a line drawing like on the cover of my old taped paperback copy
of Walden and other writings,
The Portable Thoreau by Viking Press,
but you probably know what I am referring to:

“You can never step into the same book twice, because you are different each time you read it.”
John Barton

Because this is happening to me now. Some portions of Walden, and the essays “Life Without Principle” and “Civil Disobedience,” I’ve read repeatedly, but none recently.

On the title page, I see I wrote at 16 in 1964, “These writings are surpassed by only one other book ever written—the Bible.”

That was back when I was a devout Christian, so it’s quite a stunning statement...

But now, 52 years later, reading Walden, I can’t imagine why I thought so/thus.

True, Thoreau still has his amazing turns of phrases, nuggets in the gravel of his rhetorical prose.


But at 59, I wonder what all my devout hoopla was about back then. True, I was a naive teenager who had grown up in a tiny Nebraska village 1/10 the size of Concord, Massachusetts where Thoreau had lived, not in the city.

But I doubt there was much similarity. In fact, what appealed to me so much about Walden and Thoreau was how different his life and views seemed from my own background.

He became my hero for years.

Yes, at 19 I even journeyed--heck, let's admit it--'pilgrimaged' to Massachusetts to visit Walden Pond, and an spent an afternoon walking about along its shore, reading passgaes. I allegedly stood where Thoreau had built his cabin.

But, sheesh, during the year I was there an enterprising carpenter was selling mock-up cabins of Thoreau's for a pretty penny. No doubt, Thoreau would laugh loudly at that absurd irony. Had the builder never read Thoreau's essay "Life Without Principle" which castigated such economic endeavors?

And so many writers who imagine themselves emulating Thoreau by going off into the wilderness to write tend to forget that Thoreau only spent two years of his life (at the age of 28-29) out in the woods. And his cabin was situated within site of the train tracks and a road; he could even see a few other houses in the distance.

Furthermore, he kept a couple spare chairs for friends and strangers who stopped by regularly. At one point in in the Visitor section of the book he mentions of 25-30 "souls, with their bodies, at once under (his) roof."

Not a hermit by a long shot. And there were the local fishermen in the summer months and the ice merchants taking out ice from the Pond in the winter. The land he "squatted" on belonged to his friend Ralph Waldo Emerson. 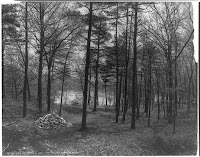 Reading Walden the last few days, I find that much of the writing is rhetorical, not philosophical or reasonable. And there is hardly a mention of Transcendentalism.

It gets much worse though. Several days ago, I read Thoreau's defense of John Brown, "A Plea for Captain John Brown." Obviously, I didn't read that particular shocking essay in 1964, one which glorifies a 19th century terrorist, declaring Brown to be like "Christ," crucified by Americans! 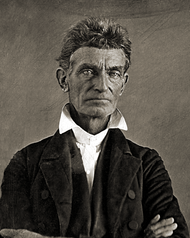 Surely, when John Brown, his sons, and followers hacked to death 5 unarmed pro-slavery individuals with their sharpened swords he was caught in the pit of self-righteous destruction.

And the murdering continued later when he and his small war band attacked and killed people at Harper's Ferry. One of the strangest ironies is that their first victim was an innocent free Negro railroad porter!

Along with the killing also came theft and deception. Some aspects of war never change.

"Evil, when we are in its power, is not felt as evil, but as a necessity, even a duty."
--Simone Weil

How strange that this murderer was idolized by Henry David Thoreau and Ralph Waldo Emerson, and many other civil leaders of the northern states, his attacks supported financially.

Appalling. But then look at how so swiftly the nonviolent protest movement of the late 1960's also descended into killing.

But I was dedicated to nonviolence by the time I was a senior in high school, strongly opposed the Vietnam War, and signed up as a conscientious objector when I registered with the Selective Service. So this pro-war side of Thoreau's writing--really poisonous meat--would never have been chewed by me. I would have spit it out.

All violence on all sides was opposed by me. I soon became a Quaker-at-large. Only once did I go to a large formal war protest. Among those thousands of angry, shouting protesters, I felt like I was caught in the belly of a raging beast.

Though I strongly worked against the war, I never attended another protest. We instead often had silent Quaker vigils at Long Beach State College near the student bookstore and the speakers' platform.

I will continue this chewing of Thoreau's writing tomorrow. Next: Walden, Chapter 2: Where I Lived and What I Lived for

To paraphrase Thoreau, in this New Year of 2016, I want to go to Life because I wish to live deliberately, to confront only the essential truths of life, and see if I can learn what God has to teach, and not, when I come to die, discover I have not lived at all.