The Tails of the New Cat and the Old Mouse

Another homeless cat has adopted us the last few weeks:-) We're calling him Cinder. He's all black on top and sides, with white paws and underbelly. In honor of this new owner of us...here's a poem I wrote for another black cat that owned us a few years back, Zorro:-) 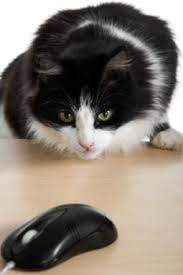 The Tails of the Cat and the Mouse

Beneath my hand the smooth mouse moves, gray and black, Its long, fibered tail swishing this and that way While I, its master, move it around. Sometimes Its corded tail catches on the keyboard tray; Perhaps I ought to buy a tailless fastback.

So goes the tail of the cat and the mouse.

My feline master, Zorro, is at the door; The living tux, white-fronted and black-masked Slinks in to claim my lap, his throne. Having just Fed himself, the cat yowls and demands a task From me. I had been working—but no more.

So swishes the tail of the cat and the mouse.

One hand's fingers peck at the disarranged Glyphs of black and white upon the keyboard; The other strokes his black crown and white jaw, And the mouse again to add more to the hoard Of text that slowly scrolls down the white page.

So curls the tail of the cat and the mouse.

Zorro, in command, sees all; the furry sphinx Adjusts his paws as I move his seat (my knees), And tracks the pad-bound motion of my mouse. Sometimes he lays a white paw on the keys; Then jumbled text appears -- a real screen jinx.

So twists the tail of the cat and the mouse.

The mouse and I, we know who holds the power; My feline Lord meows imperiously Demanding my attention, all at once. What else have I to do but serve? So he Leaps down with tailed pride from his catnap hour.

So waves the tail of the cat and the mouse.

Impatient and commanding, Zorro stands Begrudging time I spend to clear the screen. I open the door; the king of cats takes leave While my obedient mouse sits, quite serene. The jungle tale, not tech, surely rules my hands.

So ends the tail of the cat and the mouse.

Posted by Daniel Wilcox at 9:37 AM