Living Toward the Garden

Because of his vegan lifestyle, he was nicknamed the “The Seaweed Streak.” And according to a biography written by his father, the meatless health food diet was largely responsible for Murray’s athletic success. 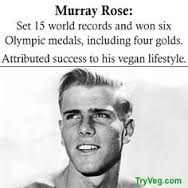 As a young adult, I was deeply impressed—I wanted to be very healthy and strong, too. How could emulating an Olympian’s health regimen not lead to a robust healthy life?

Furthermore, the main person who opposed my new way of eating was medical-nurse chain-smoker. Obviously, didn't know anything.

Besides, the deeper motivation was that a friend, who I wanted to bcome my girlfriend, had just embarked on the vegetarian life. And didn't Genesis speak of a meatless Garden before humans chose to do wrong?

Yes, “got to get us back to the Garden” like Crosby, Stills, Nash, and Young sang.*
So I launched pell-mell into a healthy program of nuts, fruit, vegetables and grains, ostracizing ham, chicken, and beef.

Did I become an Olympic star? Hardly.

I lost about 50 pounds, dropped down to around 112 pounds at 6’3’’—looked like a pale, bony Gandhi…became malnourished…and so eventually forsook “health foods" living.

Oh, and the girl quickly quit vegetarianism, long before me, and dropped out of my emaciated life.

So much for youthful error and illusion. How had Rose achieved the opposite? Who knew?

Fast-track 35 years forward and I again decided to move down the food levels toward the Garden. Only I was going to do this slowly, not as a fundamentalist convert to "health foods," like in my disastrous past, but carefully and quietly.

Ah, that’s a another narrative…except to say I've become a fish-atarian this time around
and that our doctor thinks it’s wonderful, me eating all that salmon. Now if I would just stop the midnight doughnuts;-)

*”Well I came upon a child of God, he was walking along the road
And I asked him tell where are you going, this he told me:
(He) said, I'm going down to Yasgur's farm, going to join in a rock and roll band.
Got to get back to the land, and set my soul free.
We are stardust, we are golden, we are billion year old carbon,
And we got to get ourselves back to the garden.”
by Joni Mitchell

I gave up meat when I was a kid and thn became a vegan a few years later. I've been a vegan for twenty years now. (Wow! has it been that long?) I don't actively advocate veganism or vegetarianism for others because these decisions are so personal and bodies have different needs. But I'm always pleased to hear others' stories about their relationship to food, health, and ethics. I think we all gain something from these conversations.

Thanks for the visit.
You've been a vegan for 20 years. Wow, you're almost ancient;-)

Given my very bad first experience with veganism--trying to live on nuts and vegetables, I am very interested in how others (besides Murray Rose)
have succeeded in this food discipline.

For instance, where do you get your protein from?
(Nuts didn't work for me--couldn't seem to digest them correctly; and I ate so much soy protein I became allergic to it).

Hope things are going better for your gramma.

I never had any problem with protein. It helps that I live in a pretty vegan/vegetarian friendly location. I eat tofu (organic and non-GMO is what you look for unless you have an allergy in which case it doesn't matter.) I also eat things like seitan. Seeds and nuts are good but beans are easier and less expensive. Peanut butter is always an easy protein fix and I like chia seeds. I also get protein from hemp, almond, sunflower, flax, and other nut and soy milks.

Oh! And I'm happy to report that my grandmother is doing a little better. As you know, little improvements or times of respite can be (must be) a source of joy.

Thanks for the specifics of your diet. Your veganism still sounds sort of "nutty.";-) LOL

Glad to hear your grandmother is doing better.
Things are worse here. My father took suddenly very ill, taken to emergency room.
But a silver lining--he has now been moved to rehab in the same facility as my mother so they are able to see each other more and hold hands while they watch the news:-)