"URGENT ACTION: 18 MONTHS IN PRISON FOR MOSQUE NOISE COMPLAINT (INDONESIA: UA 161.18)
Meliana, an ethnic Chinese Buddhist woman, has been convicted of blasphemy and sentenced to 18 months in prison for complaining about the loudspeaker volume at a local mosque. 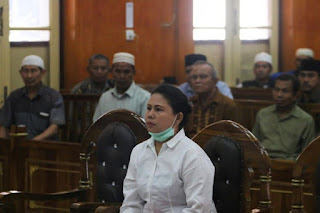 Amnesty International considers her a prisoner of conscience who must be immediately and unconditionally released.

Meliana, an ethnic Chinese Buddhist woman, has been convicted of blasphemy and sentenced to 18 months in prison for complaining about the loudspeaker volume at a local mosque.

Immediately and unconditionally release Meliana and all other individuals who have been convicted of blasphemy;
Ensure that Meliana and her family are given effective protection from violence or threats of violence;
Repeal or amend all blasphemy provisions set out in laws and regulations which violate the rights to freedom of expression and of thought, conscience and religion.
Contact these two officials by 10 October, 2018:
Ministry of Law and Human Rights
Minister Yasonna Laoly
Jalan H.R. Rasuna Said Kav 6-7
Jakarta Selatan, DKI
Jakarta, Indonesia 12940
Fax: +62 (0)21 525 3004
Email: rohumas@kemenkumham.go.id
Salutation: Dear Minister

--
Read the rest of this urgent action at AI:
https://www.amnestyusa.org/urgent-actions/urgent-action-18-months-in-prison-for-mosque-noise-complaint-indonesia-ua-161-18/

MORE INFORMATION from THE STRAITS TIMES about the basis for the blasphemy charge:

"Wahyudi SoeriaatmadjaIndonesia Correspondent
JAKARTA - Criticism has mounted, even among Muslims, against the jailing of an Indonesian woman of Chinese descent for complaining to a neighbour about the volume of the azan (call to prayer) from the speaker of the community mosque.

"Civil society groups and lawyers denounced the verdict as excessive and silly while the two biggest Muslim organisations in the country, Nahdlatul Ulama and Muhammadiyah, questioned the use of the blasphemy clause against the woman.

"I do not see how saying 'azan is too loud' is an expression of hatred or hostility towards a particular group or religion," Mr Robikin Emhas, head of the legal, human rights and legislation department at Nahdlatul Ulama, Indonesia's largest Muslim organisation with more than 80 million members, was quoted as saying in a statement.

"The blasphemy clause should not be used to "bulldoze" anyone's right to express opinions and Muslims should consider such opinions as "constructive criticism in a plural society", he said...

"Meliana, 44, a Buddhist, was found guilty on Tuesday (Aug 21) of blasphemy by the Medan district court in North Sumatra and sentenced to 1½ years in prison. The mother of four is a resident of Tanjung Balai sub-district in the eastern part of the province. Her husband, a labourer at a local swallow's nest farm which supplies bird's nests to restaurants, lost his job because of her trial.

"On July 22, 2016, Meliana was speaking with the owner of a small convenience store, who was her neighbour, when she referred to the volume of the speaker at the nearby mosque, saying that it had become louder than previously...This quickly spread on social media, which then triggered riots as Muslims, offended by the remarks, went on the rampage. Several Buddhist temples were burnt in what was believed to be the worst bout of anti-Chinese violence in the country since 1998...Meliana became a victim of a mob who descended on her house...who then vandalised and burned her house...

Read the rest of the news on Meliana at:
https://www.straitstimes.com/asia/se-asia/criticism-mounts-in-indonesia-against-jailing-of-woman-for-complaining-about-volume-of

Shine the light of goodness, justice, and compassion,

Posted by Daniel Wilcox at 9:27 AM