The strange unethical world of Christianity and Atheism: SITUATION ETHICS

Here is a somewhat positive response to situation ethics by a leading Christian ethicist, based upon Augustine and Luthers' views--

FROM Baptist theologian Roger E. Olson's blog:
http://www.patheos.com/blogs/rogereolson/
What Is “Situation Ethics?” What Should Be a Christian’s Response?
SEPTEMBER 26, 2018

"It was also the year that Episcopal theologian-ethicist Joseph Fletcher’s little book Situation Ethics: The New Morality was published."
"Later...I remember thinking that it was not actually as bad as I had been told. Its essence...the principle laid down by Saint Augustine “Love and do as you please.” (“Sermon on 1 John 4:4-12”) 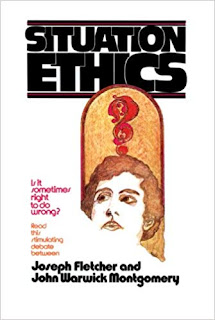 "What I am suggesting is that there is some common ground between them and Fletcher’s proposal...As I recall, Fletcher portrayed all rules as flexible, able rightly to be violated in the name of love depending on the circumstances. I do not think Augustine or Luther would go along with that...Both treated love—as they defined it—as the sole absolute for Christian ethics. (Both tended to view justice as a form of love.)"

MY OPPOSING RESPONSE TO ROGER E. OLSON'S BLOG ARTICLE:
Wow, Fletcher's book! I read it in the late 1960's and was morally horrified. And all these years later, I still think that it is the worst book, ethically, of all the thousands of theological books I've read.
But let's get to your two Christian leaders (Augustine and Luther) who claimed to base their ethical decisions on love.

Augustine and Luther made many horrific immoral, unjust decisions based upon their Christian situational ethics.

If one judges their immoral, unjust actions based upon the concept of love as defined by 1 Corinthians 13, they didn't actually practice loving action at all, but the complete opposite. Check any history book for the many very immoral actions they justified with their ethical stances.

Their immoral statements and actions show the extreme danger of centrally basing one's ethical decisions on love and adjustable rules as they did.

BACK TO ANOTHER QUOTE FROM OLSON'S BLOG:
"As a Christian ethicist I am sometimes asked...what I think about “situation ethics.” I always insist on first discussing what is meant by “situation ethics” and explaining that if and insofar as it means discarding all ethical rules and norms except “love,” I am opposed to it. However, if and insofar as it means love reigns supreme over all rules, I have to admit it and say that I have Augustine and Luther on my side."

"Luther married Prince Philipp of Hesse to a woman while he was still married to another woman. He by default justified bigamy which was technically illegal (within the Holy Roman Empire) and almost universally considered immoral by Christians—both Catholic and Protestant."

HUH?! What a horrific example! Luther married a woman to a prince who already was married to another woman. That's a form of polygamy, bigamy.

Based upon Luther's justification of bigamy, I wonder if Roger E. Olson has an opinion of the recent adoptions of polyamory by some creedal Christians?*
It appears that some modern creedal Christians are basing their views in a similar way that Luther did in the case of his choosing bigamy for the prince.

However, what also troubles me about Luther's action is that he did this secretly.

As much as I strongly oppose the adoption of plural marriage by humans, I do appreciate that the creedal Christians who have done so have been public about it, not hidden it as Luther did in the case of Prince Philipp.

*I don't know what Roger E. Olson thinks on my response because he has deleted my comments from his website, like Atheist Neil Carter did in the past when I courteously disagreed with his unethical outlook, which also involves loving situational ethics.

Don't give into this blind, wrong dead-end path of situation ethics. Certainly NOT in the sense that Augustine and Luther did.

Posted by Daniel Wilcox at 5:37 PM