Ought Americans (or any other nationality) emphasize they come FIRST?


When I was growing up,
many devout American Christians emphasized
GOD FIRST,
OTHERS SECOND
ourselves third!

BUT now they EMPHASIZE U.S. FIRST
Others, including refugees,
third!:-((((( 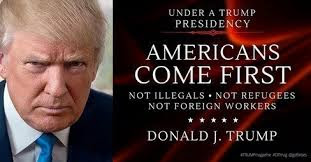 American Christians' arrogant attitude, lack of concern for the impoverished and persecuted
is
SHAMEFUL,
IMMORAL,
UNJUST,
and
ungodly.

American government leaders, are AGAIN, rejecting the moral truths of great human leaders of the past such as Jesus and,
instead, pursuing very selfish, arrogant realpolitik policies.

Please, every day, stand up and speak truth to Americans.

Posted by Daniel Wilcox at 2:06 PM