Part 2: El Morro Rock: ERASING HISTORY-- About the Take-Downs of Some Monuments and Sites, Wrong! And Alternatives 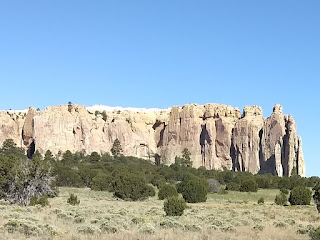 When are the remains of history valid?
When is it ever correct to take down the memorials, monuments, statues, markings, etc. of past humans?

WHAT ARE THE ALTERNATIVES?

This article is about the intriguing action of the U.S. Government at El Morro Rock.

Here on this imposing monolith in Northern New Mexico, thousands of humans for a few hundred years have inscribed images and/or their names.
(It is one of the most fascinating of National Monuments to visit, as I did a week ago.)

There are engraved names and images from Native Americans, Spanish explorers, U.S. Military troops, Wagon Train emigrants, railroad workers, and so forth.

An early marking was done by Provincial Governor Don Juan de Ornate, "Pasa por aqui..." (Passed by here the Governor Don Juan de Orante, from the discovery of the Sea of the South on the 16th of April, 1605). He had visited the site earlier in 1598 when he and 1,000 Mexican settlers came to the area. Ornate named the site Agua de la Pena (Water of the Rock).
Unfortunately, his 'graffiti' partially covers one prehistoric Native American petroglyph!

A pool of water is what first drew Native Americans here hundreds of years before Ornate. They founded a village atop El Morro Rock in about 1275 C.E. until droughts came in sometime in the 1300's. 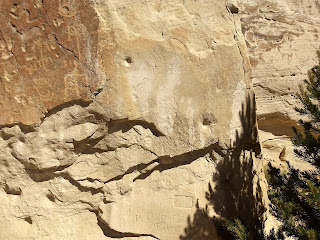 The water comes from rain and snow melt, and when the pond is full can have as much as 200,000 gallons of water! However, this isn't a spring so can easily become shallow and polluted.
But it is the only water source for 30 miles.


A preteen, Sarah Fox, a member of a westward wagon train, scratched her name here in 1858.
Look carefully because her name is difficult to read. Her name is right above the CA in the lower left of the photo. Later at the Colorado River, their wagon train was attacked by Mohave Native Americans, and she was shot with an arrow, but she survived. 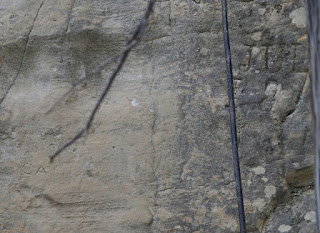 But if teens (or adults) after 1906 carve their names or images, they are guilty of a violation of U.S. Law.
The sign states: "It is unlawful to mark...El Morro Rock."

A U.S. Army leader, P. Gimer Breckinridge came here twice. The first time was with Army camels; the 2nd time he signed on El Morro. Later he would become a leader in the Confederate Army during the Civil War.

Will the U.S. Government or some local government eliminate his signature from the historic rock because he resigned from the U.S. Army (like thousands of other U.S. soldiers and Navy sailors and many West Point graduates) and enlisted in the Confederacy? 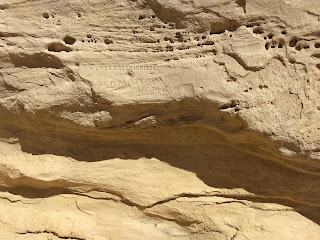 WILL BRECKINRIDGE BE ELIMINATED LIKE ROBERT E. LEE, STONEWALL JACKSON, AND OTHERS?

What concerns me in this article is the judgment by the U.S. Government to adopt 1906 as the defining date for judging names and other markings as either valued historical creations TO BE SAVED
or vandalism that was then
TO BE ELIMINATED.

IN THE EARLY 1920'S, EVON Z. VOGT, A RAMAH RANCHER AND AMATEUR HISTORIAN BECAME THE FIRST CUSTODIAN OF EL MORRO ROCK IN 1916. HE DECIDED IN THE 1920'S TO ERASE ALL MARKINGS ON EL MORRO ROCK AFTER 1906 AS INVALID.

PROBABLY, VOGT MEANT WELL, WAS ATTEMPTING TO PRESERVE THE PAST OF HUNDREDS OF YEARS AGO FROM THE MORE RECENT PAST.

HOWEVER WHY WAS PRETEEN SALLY FOX'S SIGNATURE VALID BUT A TEEN'S FROM 1907 OR LATER NOT VALID OR WORTHY?

WHY ARE ANY LATER ADDITIONS VIOLATIONS OF U.S. LAW, BAD ILLEGAL ACTIONS? 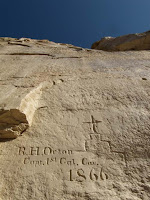 Let's deal with a few background philosophical assumptions related to the issue of when if ever public displays of the historical past ought to be eliminated.

Don't the removers (the governments, the defacers, vandals, politically-correct, and so forth) realize that when they do the take-downs, they erase public history (for millions the only history they know, since only a small minority of humans are avid book readers of history)!?

Well, of course, for those, the erasers, that almost always is exactly the point.
They want to revise history, to present to all humans their own distorted version of human history, eliminate the humans of the past with whom they disagree and strongly oppose.

In this blog, I've already explained in past posts why I think it is very wrong that the U.S. Government, and local governments such as Dallas and Baltimore and Virginia have been taking down statues of Robert E. Lee, Stonewall Jackson, memorials for soldiers, etc.
I oppose the take-downs because I was an American literature-history teacher for many years.

The reason I oppose their removal isn't because I agree with Lee, or Jackson, etc. because I don't. They were both fatalists, both supported slavery, both participated in the slaughter of at least 700,000 humans, the wounding and suffering of millions, the theft and destruction of billions of dollars of land, housing, and personal possessions.

HOWEVER, if the government thinks that their statues and memorials and street names should no longer exist, then to be consistent and fair, they ought to also take down the statues, memorials, street names, etc. to Abraham Lincoln,
to George Washington,
Thomas Jefferson,
Sam Houston,
eliminate the State Flag of California--The Bear Flag, and so forth.

For the vast majority of Americans were as guilty, often more guilty, of racism, enslavement, slaughter than Lee or Jackson. HECK, 12 PRESIDENTS OF THE U.S. OWNED SLAVES IN THEIR LIFETIMES, 8 WHILE SERVING AS PRESIDENT.

George Washington owned slaves all of his life, didn't free them until his death.

THOMAS JEFFERSON, THOUGH PHILOSOPHICALLY OPPOSED TO SLAVERY AS WRONG, NEVER FREED HIS SLAVES.

THOUGH ABRAHAM LINCOLN PERSONALLY OPPOSED SLAVERY, AS PRESIDENT HE SUPPORTED THE ENSLAVEMENT OF NEGROES IN THE UNION UNTIL NEAR THE END OF THE CIVIL WAR!

LINCOLN EVEN DEFENDED A SLAVE OWNER IN COURT EARLIER IN HIS CAREER. AND HIS EMANCIPATION PROCLAMATION APPLIED ONLY TO SLAVES IN THE CONFEDERACY.
"...Lincoln issued the Emancipation Proclamation as a military measure, it didn’t apply to border slave states like Delaware, Maryland, Kentucky and Missouri, all of which were loyal to the Union. Lincoln also exempted selected areas of the Confederacy that had already come under Union control in hopes of gaining the loyalty of whites in those states. In practice, then, the Emancipation Proclamation didn’t immediately free a single slave, as the only places it applied were places where the federal government had no control—the Southern states currently fighting against the Union."
https://www.history.com/news/5-things-you-may-not-know-about-lincoln-slavery-and-emancipation

LINCOLN STATED NEGROES WERE INFERIOR TO WHITES, NOT THEIR EQUALS: September 18, 1858, "I will say then that I am not, nor ever have been, in favor of bringing about in any way the social and political equality of the white and black races, [applause]—that I am not nor ever have been in favor of making voters or jurors of negroes, nor of qualifying them to hold office, nor to intermarry with white people; and I will say in addition to this that there is a physical difference between the white and black races which I believe will forever forbid the two races living together on terms of social and political equality. And inasmuch as they cannot so live, while they do remain together there must be the position of superior and inferior, and I as much as any other man am in favor of having the superior position assigned to the white race. I say upon this occasion I do not perceive that because the white man is to have the superior position the negro should be denied every thing. I do not understand that because I do not want a negro woman for a slave I must necessarily want her for a wife. [Cheers and laughter.] My understanding is that I can just let her alone. I am now in my fiftieth year, and I certainly never have had a black woman for either a slave or a wife. So it seems to me quite possible for us to get along without making either slaves or wives of negroes. I will add to this that I have never seen, to my knowledge, a man, woman or child who was in favor of producing a perfect equality, social and political, between negroes and white men."
I will to the very last stand by the law of this State, which forbids the marrying of white people with negroes. [Continued laughter and applause.]"

Lincoln. also, wanted all Negroes to go back to Africa or some other country! Even as late as 1863, the Lincoln Administration tried to get ex-slaves to move to British Honduras!

SO OUGHT WASHINGTON'S, JEFFERSON'S, LINCOLN'S MONUMENTS BE TAKEN DOWN?

STATUES, MARKINGS, STREET NAMES, ETC. OF PAST HUMANS--BOTH THE GOOD AND THE BAD, AND THE IN BETWEEN (PARTIALLY GOOD, PARTIALLY BAD)--OUGHT TO BE PRESERVED!

What ought we do about the memorials of previous leaders who held immoral and unjust views and who committed evil actions?

How ought worthy historical markings be separated from the markings of vandals? 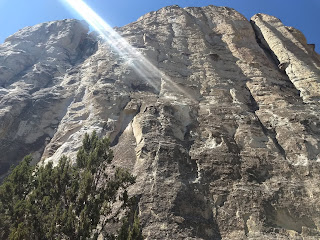 Posted by Daniel Wilcox at 7:00 AM