Is There Meaning in Reality?

This time around, it isn’t famous atheists such as Jerry Coyne or Sam Harris or Lawrence M. Krauss denying humankind’s belief in cosmic meaning but Michael Shermer.* This is a bit unusual because sometimes in the past, Shermer has, while supporting a mild atheism, has also tried to argue for the transcendent in reality in several of his books.

And, of course, countering this non-theist view of reality are other thinkers such as Carl Jung who wrote, “The decisive question for man is: Is he related to something infinite or not?"

"That is the telling question of his life. Only if we know that the thing which truly matters is the infinite can we avoid fixing our interests upon futilities, and upon all kinds of goals which are not of real importance....The more a man lays stress on false possessions, and the less sensitivity he has for what is essential, the less satisfying is his life. He feels limited because he has limited aims, and the result is envy and jealousy. If we understand and feel that here in this life we already have a link with the infinite, desires and attitudes change.” 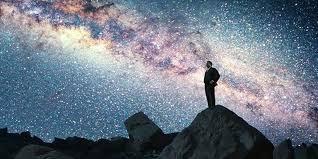 FROM Michael Shermer's article,
“Our Actions Don’t Matter in a Cosmic Sense—but That Doesn’t Mean They Don’t Matter” "Alvy's Error and the Meaning of Life" in Scientific American 318, 2, 67 (February 2018)
By Michael Shermer on February 1, 2018

“In a flashback scene in the 1977 film Annie Hall, Woody Allen's character Alvy Singer is a depressed young boy who won't do his homework because, as he explains to his doctor: “The universe is expanding.... Well, the universe is everything, and if it's expanding, someday it will break apart, and that will be the end of everything.” His exasperated mother upbraids the youth: “What has the universe got to do with it?! You're here in Brooklyn. Brooklyn is not expanding!”

Shermer continues, “Whether you behave like a Soviet dictator who murdered tens of millions of people or a Roman Catholic missionary who tended to the poor matters very much to the victims of totalitarianism and poverty. Why does it matter?

“Because we are sentient beings designed by evolution to survive and flourish in the teeth of entropy and death.”

Laughing out loud! Here is another philosophical naturalist speaking of undirected, unpurposeful evolution as “designing” !
I am amazed at how many non-religious thinkers who in their own writing speak of evolution as if it was a purposeful agent.

Probably, Shermer doesn’t believe this but is only showing how difficult it is for humans to speak about reality without “meaning” and “purpose.” He would probably say he was using “designed by evolution” metaphorically.

However, many “religious” thinkers would also state that their theistic statements are “metaphoric” not literal in a dirt and rock sense.

Then he writes “…expending energy to survive and flourish. Being kind and helping others has been one successful strategy, and punishing Paleolithic Stalins was another, and from these actions, we evolved morality.”

Huh? Does that mean if doing immoral and unjust acts would increase our “survival” then they would become the new morality. Sounds like Nietzsche, the reversal of values.

Human survival isn’t the true basis of meaning or morality. On the contrary, often true meaning and morality is contrary to human survival!

Then Shermer states, “In this sense, evolution bestowed on us a moral and purpose-driven life by dint of the laws of nature.”

There it is, again, giving agency to a natural process which, allegedly, has none—“bestowed.”

Also, how can “a moral and purpose-driven life come from the laws of nature” if cosmic reality is without any of that?

If all f reality is meaningless and purposeless, then any claim by humans that their actions and views have meaning is a delusion.

And Shermer ends with, “In the long run, entropy will spell the end of everything in the universe and the universe itself, but we don't live in the long run. We live now. We live in Brooklyn, so doing our homework matters. And so, too, does doing our duty to ourselves, our loved ones, our community, our species and our planet.”

Not if we, our places, our actions are PART of the “long run.” Then ourselves, our acts, or beliefs all don’t matter either because they are included in the whole.

I think it makes far more sense to go with those scientists who do think that all of reality--including humans--has meaning.

*Michael Shermer is publisher of Skeptic magazine (www.skeptic.com) and a Presidential Fellow at Chapman University. His new book is Heavens on Earth: The Scientific Search for the Afterlife, Immortality, and Utopia (Henry Holt, 2018).

Posted by Daniel Wilcox at 2:21 PM