Another dead-beat dad abandoned his family before his son was born. Do these tragedies ever end?

A Parable: The small boy clung to his mother, but then she died of breast cancer when he was 6. In mostly bad foster houses where he grew up, he found solace and hope in books, safe at the library. Books gave him wings to escape dysfunction, loneliness, and the death traps of having no father.

When he reached young adulthood and became a writer, after graduating from the University of Michigan, he searched and searched for years looking for any trace of his absentee father, (while still grieving for his gone mother). 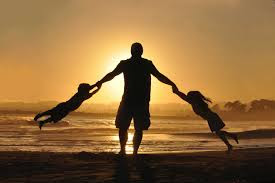 Finally, 3 decades later after years of diligent effort, a hire-detective located the man who was now living in Portland, Oregon, married to another woman with 3 offspring who he was ignoring, too.

The fatherless son drove across our troubled, divisive land of the U.S. to Portland, Oregon, where violent protesters were attacking businesses and police. He avoided all of that uproar and hatred, intent only to get past that craziness and tragedy, anxious to meet his unknown dad.

But when he got to downtown, he felt ambivalent and sat down in a graffiti-scrawled park, where vandals had burned the base and statue of a large elk, wondering whether he really wanted to meet this ‘father’ who had deserted his mother and him so many years ago.

Out on the rough dark waters of the Columbia River, huge ships and small boats moved by. Fog shrouded the opposite shore of Washington State.

Following directions, the investigator had given him, the adult orphan took a taxi to the luxurious address soon after dawn, on a drizzly morning, and walked up and down a wide, slick sidewalk out in front of a large mansion. The man-boy kept staring up at the immense locked door wondering if his absent father was in there.

Suddenly its owner--evidently his father--came out slamming the door behind him, and hailed the orphan’s waiting taxi, not even looking at the stranger in front of his gate, got in and sped away. Not so different from years ago.
--

Again, that abandoned son of so long ago was left. Only now that orphaned boy is an accomplished writer.

The abandoned son: "I stood there at the gate for hours. Only delivery men and the mail carrier came by.

After remembering years past, I reflected on that man's build. It was all wrong, stocky and overweight; and he had walked with a lunge, as if about to attack some invisible enemy. His face was grim, and with a large nose.

Not at all like me—with a skinny frame and my face with prominent cheeks and a pudgy nose; I must have gotten my body from my mother.

Suddenly, a deep knowing clobbered the seeking boy within me. That grim stranger may have spermed me, but he wasn’t my dad, not my actual father, never had been.

I may have gotten a genetic link from this total stranger, but my real father—fathers are the good writers I read growing up in those dysfunctional foster houses.

The authors who are brilliant, creative thinkers who guided me when I had no father and had lost my mother."*

My Response:
Unlike this orphan, I did have a very dear father, one who used to take me fishing, hunting, and traveling, and guided me as to what was right and helped me later with major decisions. A man who stood by me, a real friend.

And a warm idealistic mother, (very hard-working like my dad, too) who gave me and my sister a deep sense of equality and justice and diligence.

But in another sense, some of the authors I have read over the years have ‘fathered’ (and/or 'mothered') me. Maybe even more deeply than my father and mother who gave me birth and guided me when I was young.

For instance, think of how many scientists got their start as star-eyed kids because of love of and inspiration from science fiction and speculative literature.

And think of famous humanitarians and Enlightenment justice advocates who were first inspired by idealistic heroes in suspenseful stories as children.


For good or for ill, for joy and zest or sadness and despair...as some thinkers have stated, envisioning is the creator of our humanity’s future, not mere matter of facts.

Facts are only building blocks to create what isn’t yet. Our creativity and hopes and goals are the schematics, the structures for bringing into being our creative future.

Where would I be without Thoreau, Bonhoeffer, Hawthorne, C. Bronte, F. O'Connor, Lewis, Nouwen, Merton, Tillich, Wiesel, Camus, Poe, Vonnegut, Thich Nhat Hanh,
even writers of the darker side, sometimes immoral and unjust, such as Millay, Kerouac, Hemingway, Steinbeck, and Simmons?

Take time to consider: What authors have 'fathered' and/or 'mothered' you in your life?