Writers who ‘fathered’ me, giving my young adult self various versions of deep time eyes:

2. Friends for 300 Years by Howard Brinton

And there were other writers, whose legacy has been only partially good, because they communicated bad and fallacious views, ideas, and harmful actions. They were bad models for young impressionable Dan:

21. Francis and Edith Shaeffer, famous couple who founded L’Abri. He, at first a missionary to the Swiss beginning in the late 1940’s, later became a Christian philosophical apologist and she wrote a famous biographical, inspirational book about their famous Christian community and intellectual center in Switzerland.

In my young adult years, I avidly read most of Schaeffer’s critiques of secular and atheistic life stances and apologetical defenses of mere Christianity. I was deeply impressed with his insights, artistic interests, and caring views.

His emphasis that every Christian needs to have a total commitment to agape love, the way of Jesus, he presented in his short book The Mark of the Christian.

Schaeffer had a deep understanding of key atheist views, their weak philosophical bases, and their destructive implications for humankind. His writings strongly influenced me and millions of other Christians coming of age in the late 60’s and early 70’s. Two of his best books are
The God Who Is There and Escape from Reason.

What I didn’t know back then, because Schaeffer hid this, is that he wasn’t a ‘mere’ Christian (in the sense of C.S. Lewis) like he presented himself, but a hardline Calvinist!

I still find that hard to understand or square with his more liberal artistic and moral views. It turns out, that he was a member of and missionary for an extremely fundamentalistic Calvinistic denomination that had split from a larger conservative one.

This all only came to light later in the early 1980’s when I discovered other facts about him that, also, were so contrary to his public image and his reasoning in his books. For example, another horror, I still find inexplicable is that he strongly supported nuclear weapons. Doing so, of course, is grossly contrary to the moral outlook of his book, The Mark of a Christian.

Schaeffer's wife, Edith Schaeffer, wrote L'Abri,a famous biographical story of their outreach community of L’Abri in Switzerland. She greatly inspired and motivated and misled me!

In her riveting, deeply spiritual biography, Edit emphasizes many instances of supernatural answers to prayer. Based upon her book, my dedication to prayer became much stronger, and my belief in miracles increased (though I still had strong doubts about all of that because there were no cases of proven miracles and no evidential cases of prayer actually changing any events).

Years later, when I read the tell-all autobiography by their son, Frank Schaeffer, Crazy for God and other accounts of their famous story of L'Abri, I discovered, that while she may have been sincere in her beliefs, her claims seem to be shown to be false. In fact, it turns out that her husband Francis was given to severe depression, that he verbally and physically harmed her, and that there were other disheartening facts about their story that were contrary to her idealistic presentation in her biography.

So much for the good and bad influence of these two authors on my life in the past.

That was the Christian influence, a mixture of very good and very bad.
--

22. Jack Kerouac, infamous Beat novelist and poet who influenced 2 generations of young poeple. He wrote life-changing autobiographical novels including On the Road, The Dharma Bums, and Big Sur. 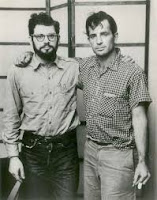 Though I had wonderful experiences “going on the road,” being influenced to study Buddhism, getting a backpack, hitch-hiking like him repeatedly across sections of the U.S. (and later across Europe and Palestine-Israel),
overall Kerouac was a bad influence.

Fortunately, I adopted some of his life stance views and actions, filtered through the lens of my Baptist Christian faith, so I didn’t succumb to any of his vices and immoral actions.

It still astounds me that I read books such as The Dharma Bums, and centered myself only on his exciting nature hikes, work as a U.S. Forest Service fire lookout, and evocations and descriptions of his love for God (which I mistakenly interpreted as similar to my own devotion to God, though his God was considerably different from the one I believed in).

I skipped over his often positive comments about sexual promiscuity, heavy drinking, drugs, irresponsibility, etc. Those down-sides to his life stance, I very strongly opposed but managed to admire him as one of my heroes. This later changed at the University of Nebraska, when an older grad student warned me of the dangers of Kerouac, Ginsberg, and other Beats, explaining how their gross personal lives contradicted their commitment to God, love, and altruism.

Tragically, there was a bad instance of this older students' negative analysis demonstrated when one of Kerouac's and Ginsberg's close friends got a young student pregnant and then skipped town, just after the Beats were emphasizing to be loving to everyone. Too often, their "love" was selfish lust.

I’m amazed that I could become so enamored of Kerouac such a figure and writer whose life stance was so contrary to my own. Basically, I think it was his creativity and his adventure-some actions that hooked me.

Always, I was somewhat of a wild spirit, even as a fundamentalist Baptist kid. My sister used to tell me later how she thought I really was going to live in the forest in a cave when I grew up like I told her when we were kids;-).

My natural inclination was further spurred in opposite direction of my mom who so strongly sought to discipline and direct me into a very ordered, controlled, secure, unadventurous life. And, also, one mustn’t forget, that in my late teens, like most young men, I was feeling rebellious and probably had lots of male hormone coursing through me.

And, I was disconcerted, and disheartened that my dad let my mom control, inhibit, and cow him, and put him down, and disparage him. I really hated that and didn’t want to be like that, under a controlling woman’s grip.

So, enter Kerouac, via another obsessive reader student in our high school philosophy class. This intellectual often read books such as Kerouac’s in particular, The Dharma Bums, even during lectures from our great teacher, Tom Keene!

But that brilliant student wasn’t a good role model either. He suddenly disappeared from class one week and didn’t return. It turned out that he had taken off to travel west, hitch-hiking and riding the rails like Kerouac.

I followed in their steps, hitch-hiking back and forth across parts of the U.S., then across Europe, Palestine-Israel, etc.

Without Kerouac’s influence, I would have still adventured a little, but would have stayed in college (instead of taking 7 years to graduate), would have gotten my teaching degree at 22, instead of at 32!

Then I would have been prepared for adult-married-fathering life in my early 20’s instead of being a late bloomer, in my early 30’s. My wife and I would have been far more financially secure. I would have probably figured out a way to buy a great real estate deal offered to me--the Speer place without lying to the old owner shortly before he died.

On the other hand, would I have missioned at the Northern Cheyenne Reservation, hitch-hiked across the U.S. and Europe, lived in Palestine-Israel on a kibbutz, lived in Haight-Ashbury, etc.?

In the Light of Truth, Justice, Equality, and Altruism,