The Whole Human Versus the One-Angled Human


#1 Usually orthodox Christians, Muslims, Jews, and other religionists say they live only by faith (usually narrowly defined)-- belief in the divine, eternal truth of only their own ancient literature by which all other human values must be judged, that all other views are "made-up" or "demonic" or based in "human pride" and "selfishness." 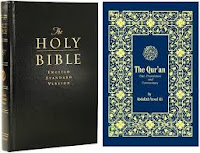 According to them, each human has no “inherent” worth, value, and meaning. Every human and everything else is “worthless” except for whom and what God has given value to in his foreordination, sovereignty and hidden will.

All events in existence including natural disasters, disease, war, famine, crime, and evil etc. are the result of the sovereign will of God.

#2 Usually hard Atheists say they live only by science and reason (usually narrowly defined)--that all other human values are subjective, relative, “made-up,” “constructed,” only “ personal opinion” or “cultural preference” that there are no inherent ethics, no human “rights,” no “justice,” no valid aesthetics, no “better” culture or social framework.

According to them, each human has no “inherent” worth, value, and meaning. Every human and everything else is “worthless” because there is no essential or ultimate reality. Nothing but matter and energy moving eternally. 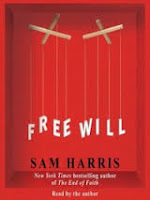 All events in existence including natural disasters, disease, war, famine, crime, and “so-called evil” are the result of a meaningless, purposeless rigid determinism. All humans are "puppets" and have no choice.

Do you see the irony of this double-mirror, each worldview, perspective negating the other yet almost exactly the mirrored reflection of the other in many significant ways?

Of course, most religionists don’t only live by “faith.”
They regularly live by “science and reason” when it comes to illness, mechanical failure, running their business, etc.

Most of them don’t live “only by faith.” When they are sick, they consult a doctor, go in for an operation, when their vehicle breaks down, they use tools or take it to a mechanic, when they start a business, they employ an accountant, etc.

And, of course, most atheists don’t live “only by science and reason.”
They regularly support the police and serve on juries which are allegedly based in justice, not subjectivity, that if criminals break into their house or assault their children, it’s not just “subjective,” “relative,” or “made up.”

And they usually send their kids to formal schools be educated in the humanities and aesthetics as well as science.
They don’t assume that the latest scam, National Inquirer news, or scrawl on the side of a building are “equal” to an historical study, meticulously honest fair news or the classics in the library. 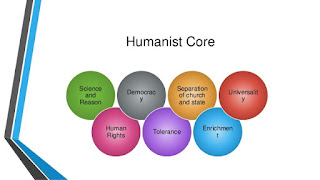 Essential or Inherent Humanism seeks to counter both of these ‘one-angled’ extremes which distort reality.


But the explanation of that is for the next post:-)

Posted by Daniel Wilcox at 7:55 AM