Human Species: "All you are is a bag of particles..." Claims Atheist and Physicist Brian Greene


“All you are is a bag of particles acting out the laws of physics. That to me is pretty clear.”
Brian Greene 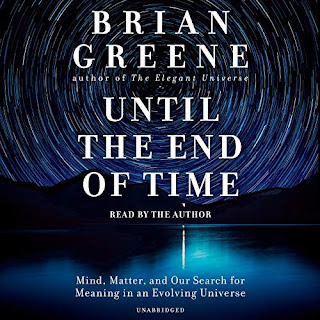 Like some other famous atheists, Greene in his new book, Until the End of Time, claims that humans don’t have “free will” because that ability would violate the laws of physics. Furthermore, there is no meaning to the cosmos.

Those aren't scientific statements but extreme philosophical claims. There are other astrophysicists who strongly disagree such as South African physicist and anti-Apartheid leader George Ellis.

IF we accept Greene's denial of free will, then think of the nature of the claim.
So when President Trump demeans, belittles, and name-calls other Americans, it’s not him bullying them, it’s the “laws of physics” doing that to other “bags.”

What’s also odd is that after making such extremely negative statements against human worth, against morality, against human creativity, etc. in the first half of Until, Greene appears to contradict himself later in his chapters on literature and other fields of study. In those, he writes of human creativity, marveling at what humans have achieved and the wonder of life.

IF all humans are only “a bag of particles acting out the law of physics” and determinism rules all, then like Sam Harris as claims human primates are only “biochemical puppets.”

Individual humans have achieved nothing but what cosmic strings yanked them into! So, the Germans didn’t choose to murder 10 million humans in concentration camps. They were forced by the laws of nature to do that.

Islamic State leaders didn’t choose to behead innocent civilians in the Middle East. That must happen because it was determined by the Big Bang.

According to these naysayers, the cosmos or evolution or nature or the Big Bang have lockstepped all of us humans to do whatever us “bags” do in this tragic life, this absurd existence.

Well, at least Greene didn’t compare us to “bacterium” or “scum” like two other famous scientists.

DON’T LET THESE PIDED PIPERS OF NEGATION GET AWAY WITH THESE NON-SCIENTIFIC CLAIMS.

It is true as Greene says that at the quantum level, a human is in popular lingo, “moving particles.”
But that ISN'T all what he/she is.

In physics, this mug of coffee and the individual holding it are only particles, and at a higher level only a mixture of various chemicals.

BUT at a conscious rational level, it is a teacher, a morally responsible human getting ready to teach over one hundred teens during a creative but exhausting day at a high school in Santa Maria, California.


In the Light of what is True, Good, and Just,

Posted by Daniel Wilcox at 3:29 PM