Review of Once Upon a Country, a Palestinian Autobiography by Sari Nusseibeh


Once Upon a Country by Sari Nusseibeh

Powerful autobiography and political history from one family’s perspective of the Palestinian-Israeli conflict of the 20th Century! 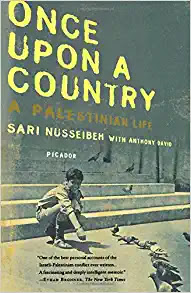 It restores my hope in Palestinians and makes me realize that the real problem in the Middle East (an elsewhere as well) isn’t any certain group of people, nor even any particular religion, but rather extremism, blind faith, and the dark side of human nature.

The central answer to intolerance is educated reason and the rejection of religious and political ideology!

I seem to have far more in common with this Palestinian, Sari Nusseibeh, than my own relatives for instance, more agreement with him than probably with anyone here on the Central Coast of California, where most people are fanatically supportive of the present administration of the U.S. and the Israeli government, and for various forms of creedal Christianity!

What Once Upon a Country also does is—despite Sari’s evident practical agnosticism and nominal faith—is restore confidence that we as humans can find hope and change despite the almost insurmountable problems and catastrophes of human history.

Sari communicates his life story and rational hopefulness and how he stood for nonviolence and reconciliation in the midst of intense hatred and violence, some even coming toward him and his family.

The book, too, again makes one cognizant of how much human destiny is affected by background, that while we do have some free creative choice (are morally responsible), some of us are better able to choose than others--
how upper class individuals who are bright and secularly educated, can have tremendous impact on their nations and the world, unlike average people who are more likely to be blinded by popular media and religious and political propaganda.

Part of the reason that Sari can be so rational and tolerant is that he comes from brilliant tolerant parents who sent him to England to be educated, where he earned his B.A. Then he earned his PhD in literature and philosophy in the United States at Harvard.

Such a background, while not guaranteeing moderation, hope, and nonviolence, certainly makes such moral qualities more possible than if he had grown up poverty-stricken in an intolerant family in Gaza with only a rudimentary education and filled with intolerant religious doctrines.

The extreme historical irony of reading this book is that Sari has been waging his nonviolent campaign for years yet the news never mentions it, but only the Palestinian extremists with bombs and Israeli settlers taking Palestinian land.

What if the international and U.S. news instead focused on Sari and other Palestinians’ peaceful protests and their efforts at education (such as Mars Elias Schools and Ramallah Friends School)?

This book has reignited my tremendous concern for Israel-Palestine. Thanks Sari!


In the Light of tolerance, education, and creativity,

Posted by Daniel Wilcox at 9:48 AM