ATTACKED! What Are You Going to Do?


How Are We Going to Respond to Attacks? 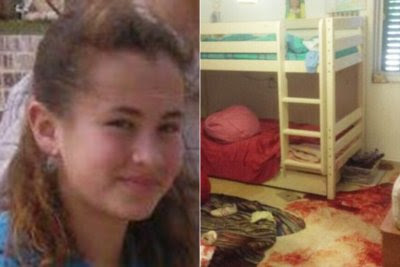 BETHLEHEM (Ma’an) -- A Muslim Palestinian teenager, Muhammad Nasser Tarayra, was killed by a security guard on Thursday morning in an Israeli settlement in the southern occupied West Bank after carrying out a "martyr" attack--
repeatedly stabbing a 13-year-old Jewish girl, Hallel Yafa Ariel, in her own bedroom.
Shortly later, Hallel died from the murderous attack.
from http://www.maannews.com/Content.aspx?id=772054

Two months earlier, Muhammad's cousin, Yousef, was shot while committing a vehicular attack against Israeli soldiers.
Muhammad wrote on his Facebook page,
"Yousef is not the first martyr nor the last / and before he is my cousin he is a son of Palestine / God willing I will walk in the martyr’s footsteps / God have mercy on him and take him to heaven.”

After Muhammad's murder of the 13-year-old girl, his mother stated that she is "proud" of her son, and that her son is a "hero."
“My son died as a martyr defending Jerusalem and the Al-Aqsa Mosque..."

“Praise be to Allah, Lord of the Worlds, he [my son] has joined the martyrs before him, and he is not better than them. Allah willing, all of them will follow this path, all the youth of Palestine.
Allah be praised.”
http://www.timesofisrael.com/liveblog_entry/mother-of-kiryat-arba-terrorist-my-son-is-a-hero/

A sister of the killer said, “My brother is now a martyr. May God judge the Jews, and may my brother be content with his portion in paradise.”
--

What Are You Going to Do?

How Are You Going to Respond?

Other True Real Life Events,
(from minor to serious to horrific):

#1 Property Damage/Vandalism: Your New Chevy Van Is Keyed on the Whole Left Side

#4 Bodily Harm: You Get a Very Bad Cut Across Your Forehead and Lose One of Your Eyes When 2 Thugs Attack and Rob You (This happened to the Brethren in Christ leader Donald Tippet. Read of how he responded at the bottom of this article.*)
http://www.bic-church.org/connect/publications/Shalom/previous/pdfs/Spring01.pdf

#5 Lethal Violence: U.S. Ally Attacks Others
(A Government or Group to Whom We’ve Given Intelligence and/or Monetary Assistance)

#7 Invasions: The Mexican War, the Invasion of the Confederacy, Invasion of Vietnam by the U.S. and French, etc.

#9 Individual Acts of Terrorism:
a. Palestinian Muslim Knife, Vehicle, and Shooting Attacks Against Many Jewish Civilians such as the murder of Hallel Yafa Ariel
b. Omar Mateen, Muslim American Security Guard, Shoots to Death 49 and Wounds 53 Same Sexual Individuals in the Pulse NightClub in Orlando, Florida

#10A 9/11: Muslim Jihadists, originally supported by the U.S. Against the Russians Turn Against the U.S. and use planes to kill over 3,000 people

#10B U.S. Civil War: General Sherman's infamous March to the Sea, creating a 40-mile wide swath of destruction, vandalism, theft, and horror across Georgia, to terrorize the Confederacy into Surrendering;
the intentional abuse and deaths of hundreds of thousands of Union and Confederate prisoners of war by both sides 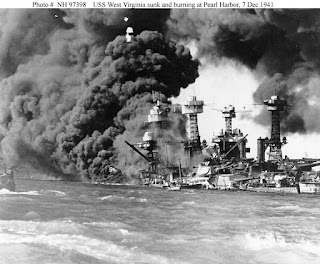 "They included the Nanjing Massacre, the bombings of Shanghai, Nanjing, Hankou, Chongqing and other cities, the enslavement of the comfort women, and the vivisection experiments and biowarfare bombs of Unit 731."

"Less noted then and since were the systematic barbarities perpetrated against resistant villagers, though this produced the largest number of the estimated ten to thirty million Chinese who lost their lives in the war,
a number that far surpasses the half million or more Japanese noncombatants who died at the hands of US bombing..."
http://apjjf.org/-Mark-Selden/2414/article.html

In the firebombing of Tokyo alone, 100,000 died, and 1,000,000 were injured.
In contrast, at the start of WWII, President Roosevelt had warned European nations, “under no circumstances [to] undertake the bombardment from the air of civilian populations or of unfortified cities."

The U.S. Strategic Bombing Survey provided "a technical description of the firestorm and its effects on Tokyo:

"The chief characteristic of the conflagration . . . was the presence of a fire front, an extended wall of fire moving to leeward, preceded by a mass of pre-heated, turbid, burning vapors . . . . The 28-mile-per-hour wind, measured a mile from the fire, increased to an estimated 55 miles at the perimeter, and probably more within. An extended fire swept over 15 square miles in 6 hours . . . . The area of the fire was nearly 100 percent burned; no structure or its contents escaped damage." 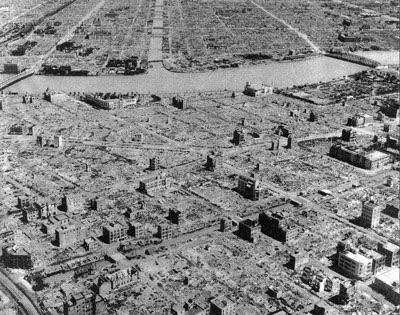 “...probably more persons lost their lives by fire at Tokyo in a 6-hour period than at any time in the history of man. People died from extreme heat, from oxygen deficiency, from carbon monoxide asphyxiation, from being trampled beneath the feet of stampeding crowds, and from drowning. The largest number of victims were the most vulnerable: women, children and the elderly.”

How do you think we ought to respond to attacks by others?

Here's the answer of only one man in response to a single attack:
*"Bishop Donald Tippet of New York City had a scar that ran across his forehead and he was
blind in one eye from two men who robbed and mugged him.

After his hospitalization, he decided to declare war on them. He went to the jail to visit them and told them God loved them and had a purpose for their lives, and he wasn’t going to leave
them alone until they discovered that purpose.

He visited them weekly, and finally led them both to Jesus Christ. He went to their parole hearings, and testified on behalf of the two men who had blinded him. Finally, he told them that when they got out of prison he would help them finish high school, and then he would help
them finish college if they chose to go.

One didn’t go to college, but the other did. He made outstanding grades, went to medical school, and became an opthamologist!

We are called to take back enemy territory. This young man became a restorer of vision instead of a taker of vision.

He became a healer and friend; he was lost and now he is found...Donald Tippet declared war, and
assaulted those two men with love; he hurled forgiveness and grace at their hearts,
and he stabbed them with truth and compassion.

That’s how God fights wars. If you want to control somebody’s body, kill them, put them in shackles and in jail, but if you’re after somebody’s heart, the only weapons that work are the weapons of Jesus
Christ."
--Woody Dalton is senior pastor of the
Harrisburg (PA) Brethren in Christ Church.
Grantham BIC,March 4, 2001.
Shalom: A Journal for the Practice of Reconciliation,
Volume 21, Number 2; Spring 2001, page 5
http://www.bic-church.org/connect/publications/Shalom/previous/pdfs/Spring01.pdf
--