How Would You Answer Jerry Coyne? 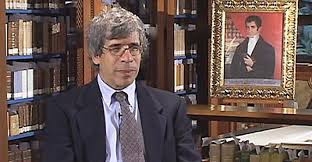 How would you answer this?

The atheist, biologist, and hard determinist Jerry Coyne asked this question today on his website:

Jerry Coyne: "If you were asked to explain to someone, say an open-minded person you’d just met, why you’re an atheist,
and were limited to at most three sentences,
what would you say?"

Wouldn't the most reasonable answer be--if one is a determinist: 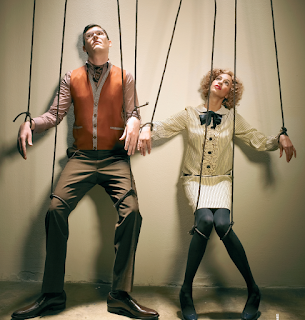 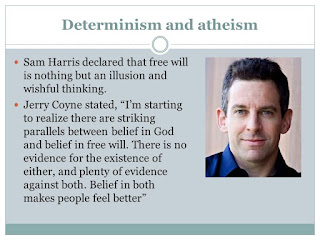 According to biologist Jerry Coyne, God doesn't exist because
#1 of "lack of evidence"
#2 of "evidence against the idea of God...existence of undeserved evil..."
--


For free will theists out there--those who think all human do have a choice--what would you say to Jerry Coyne
as to why you think God is real?


What would you tell Jerry Coyne, Sam Harris, and other determinists,
why you think that all humans
do have moral choice and creative ability?

Hi Daniel, You've presented a couple of very interesting questions concerning determinism and free will. As an aside, I've noted how often the atheist will acknowledge the laws of nature and promote science over faith (as if science doesn't require faith). But C.S. Lewis summarizes the rapid rise of science in the 16th and 17th C. based on the biblical world view by saying, "Men became scientific because they expected law in nature and they expected law in nature because they believed in a lawgiver." More recently Oxford professor of Science and religion, Peter Harrison goes beyond pointing to theism in general, but also the particular principles of biblical interpretation used by the Reformers that made a significant contribution to science.
But to the main question of free will and determinism, In total contrast to Jerry Coyne, Professor J. Budziszewski (JB) of the University of Texas in his book "The Revenge of Conscience" outlined briefly his escape from his atheistic nihilism to Christian belief. JB previously argued that we make up the difference between good and evil, and that we're not responsible for what we do anyway. His argument reversed this order because he first denied personal responsibility. His thinking was that we could not have free will because everything we do or think is just an effect of prior causes. Second, he concluded that if we have no free will, then good and evil can't make sense. On the one hand we are not responsible for our deeds, so we can't be blamed or praised for good or evil, but on the other hand we are not responsible for our thoughts, so we can't have any confidence that our reasoning will lead us to the truth about good and evil. JB reasoned that if the good for man can't be known to man, then it cannot be offered to man as his good; for all practical purposes then there is no good.
JB goes on to point to the holes in his arguments. One hole is that in order to deny free will he had to assume that he understood causality which he sees as foolish because he didn't understand what causality really is any more than he understood what free will really is. He sees them both as equally wonderful and mysterious. Another problem-his argument was self-referentially incoherent. If his lack of free will made his reasoning unreliable, so he couldn't find out which ideas about good and evil are true, then by the same token he shouldn't have been able to find out which ideas about free will are true either.. But in that case he had no business denying that he had free will in the first place.
I think a final point that JB makes applies to the angry atheists such as Dawkins, Harris and tied to Coyne and is a very biblical truth. He points out that everything goes wrong without God. This is true even of our minds. When some people flee from God they rob and kill, others do drugs and sex but though this may come as a surprise to intellectuals with a strong mind, there are some forms of stupidity that one must be highly intelligent and educated to commit. JB's main reason for being a nihilist as he says, was "sheer, mulish pride. I didn't want God to be God; I wanted JB to be God." Romans chapter 1 clearly points this out.

Thanks for stopping by and posting a long comment on your views.

However, I find all forms of determinism, especially that of the Reformers and Augustine to be nihilistic and full of despair. Paul seems to have been ambiguous on determinism.

Sometimes Paul emphasizes all humans are loved by God and have choice; in other contradictory verses by him, he advocates we are worthless. One famous Calvinist minister, based on Romans 9, emphasized that God made us humans as "toilets" and "spittoons."

As already mentioned, I first encountered this horror of Reformed determinism when I was 17 years old and then had to spend over 50 years battling against thousands of Calvinists who were determined that I must admit that all humans are theological clay pots, worthless and “in essence, evil” and that God plans all evil for his own glory, including the Nazi Holocaust.:-(

But I refused and continue to do so. Must be determined;-)

Many atheistic determinists only substitute the Cosmos for the God of Reformed theology and call us human beings "wet robots," "tumors all the way down," “puppets,” etc.

And Islam claims that Allah is the ordainer, that one must believe in qadar (fate).

I am thankful for the many contrary thinkers who, instead, emphasize that all infants are conceived and born innocent and precious, and that all humans have free choice.

I'm a bit late to the party, but C. S. Lewis liked to point out in such cases that such reasoning is inherently self-defeating.

If all thoughts - theism, atheism, etc., are predetermined by the laws of physics and chemistry, and not ultimately the result of free rational thought, then so is his belief in determinism.

He claims we are determined not because this is the conclusion of a rational process, but because the universe made him believe that.

If so, his belief is by definition irrational, and clearly should not be trusted.