FCNL and other organizations are supporting a national call-in day to generate cosponsors for a bipartisan initiative against selling 1.5 billion dollars' worth of arms to Saudi Arabia.

"Will you call your senators and urge them to block the arms sale to Saudi Arabia?

...There hasn’t been much attention to this massive bomb sale the Obama administration has planned, even though the announcement comes in the midst of news
of the Saudi-led coalition
bombing another school,
and a fourth
Doctors Without Borders
hospital in Yemen. 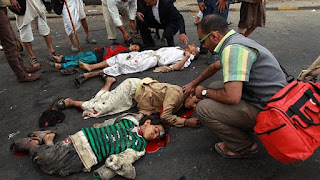 "While Saudi Arabia is dropping the bombs, the U.S. is often supplying the bombs and providing other support for the war.

As Senator Chris Murphy pointed out,
“there’s an American imprint on every civilian life lost in Yemen.”
--

QUOTE FROM REP. LIEU against this arms sell to Saudi Arabia:
“The actions of the Saudi-led Coalition in Yemen are as reprehensible as they are illegal." 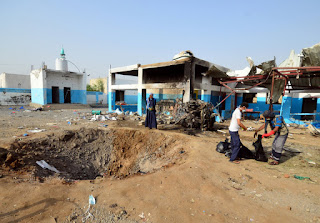 "The multiple, repeated airstrikes on civilians look like war crimes. Hospitals, schools, and wedding parties are not legitimate military targets.

Saudi Arabia is either intentionally targeting civilians or deliberately indifferent in executing its military operations – either case flies in the face of long-standing international standards of conduct.

The United States of America should never support such atrocities in any way. They are not only immoral and unlawful, but they seriously harm our national security and moral standing around the world.”
--

"A hospital associated with Doctors Without Borders.
A school.
A potato chip factory.
Under international law, those facilities in Yemen are not legitimate military targets.
Yet all were bombed in recent days by warplanes
belonging to a coalition led by Saudi Arabia, killing more than 40 civilians."

"The United States is complicit in this carnage."

"It has enabled the coalition in many ways, including selling arms to the Saudis...Congress should put the arms sales on hold and President Obama should quietly inform Riyadh that the United States will withdraw crucial assistance if the Saudis do not stop targeting civilians and agree to negotiate peace."

"In all, the war has killed more than 6,500 people, displaced more than 2.5 million others and pushed one of the world’s poorest countries from deprivation to devastation. A recent United Nations report blamed the coalition for 60 percent of the deaths and injuries to children last year."

"Human rights groups and the United Nations have suggested that war crimes may have been committed."
http://www.nytimes.com/2016/08/17/opinion/stop-saudi-arms-sales-until-carnage-in-yemen-ends.html?
--

Hello, my name is [NAME] and I’m a voting constituent calling from [CITY, STATE].
I’m calling to urge the senator to join the bipartisan Murphy-Paul bill to block the $1.15 billion arms deal to Saudi Arabia.
Saudi’s war in Yemen is a humanitarian catastrophe and the U.S. shouldn’t be rewarding the killing of civilians by sending more bombs.

Once you're done with your call, make sure to follow up with a message to your senators and representative urging them to block the deal.

Thanks for all you do for peace,

For more background on the U.S. supported Saudi-led war in Yemen, see the New York Times editorial calling on Congress to block the arms deal. You can also check out the bipartisan House letter that FCNL supported, which calls on President Obama to delay the arms sale to Saudi Arabia.

You can also join a webinar on the war in Yemen hosted on Mon Sept 12 featuring Yemeni journalist Nawal al-Maghafi and our partners at Oxfam, Human Rights Watch, Oxfam and Win Without War."
--

Posted by Daniel Wilcox at 9:32 AM