Years ago, a short reflection by William Saroyan
dramatically captivated me, vivid words of remembrance--
on the beauty and uniqueness
of small pebbles and stones
that he had found on
the California shore. 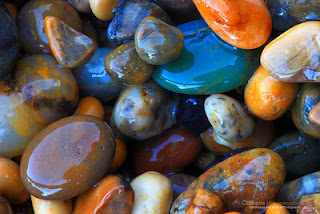 Saroyan, (as I warm in the remembrance), spoke of small moments of beauty,
natural objects of serendipity, alluring things of transcendence...
that he set on his writing room shelves,
and felt their
wonder
when the sun shone on them.

From then on, inspired, I collected all sorts of pebbles, agates,
rocks, sea-glass, and shells whenever we visited the coasts.


I became a beachcomber of beauty, a voyager through the washed-up-and-down of life.

A drifter and sea stroller who walks along sand dunes and shores looking for things, even riff-raff...

riffraff (n.)
late 15c., from earlier rif and raf "one and all, everybody, every scrap," also "sweepings, refuse" (mid-14c.)...from raffler "carry off"...or from raffer "to snatch, to sweep together"
Online Etymology Dictionary

Even now here on my computer desk and other shelves, rocks, pebbles, and shells
lay still waiting for another I-It encounter:-),
the aesthetic depth which sometimes
transcends itself
into the wonder!

Which reminds me of another key pebble of beauty for living--
that we humans are washed up
on the shore of existence,
surrounded and crowded
by circumstances we didn't choose.

But the wonder of our human neural plasticity
is that we each get to choose
how we respond to life's circumstances
and we get to create anew, contribute a verse,
as Walt Whitman versed.

Oh me! Oh life! of the questions of these recurring,
Of the endless trains of the faithless, of cities fill’d with the foolish,
Of myself forever reproaching myself, (for who more foolish than I, and who more faithless?)
Of eyes that vainly crave the light, of the objects mean, of the struggle ever renew’d,
Of the poor results of all, of the plodding and sordid crowds I see around me,
Of the empty and useless years of the rest, with the rest me intertwined,
The question, O me! so sad, recurring—What good amid these, O me, O life?

Answer.
That you are here—that life exists and identity,
That the powerful play goes on, and you may contribute a verse.

And, then, there are the more folksy versions of that point:

There once was an oyster tale to tell,
Of beach sand that got into his shell;

'Unjust' a grain; it gave him great pain.
Oysters got feelings though they're so plain.

Did he curse...go mum and clam, or claim
The lively sea shouldn't so maim?

Thus a mean grain of sand that hurt so
Became a beautiful pearl aglow.

Another creative exploration of happenstance, serendipity, beauty, and lifestance
occurs in William Saroyan's powerful little play, The Oyster and the Pearl:

SCENE: Harry Van Dusen's barber shop in O.K.-by-the-Sea, California, population 909. It's an old-fashioned shop, crowded with stuff not usually found in the barber shops...
Harry himself, for instance.

He has never been known to put
on a white barber's jacket
or to work without a hat
of some sort on his head:
a stovepipe,
a derby,
a western,
a homburg, 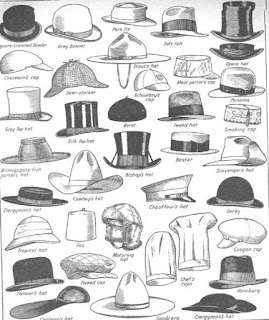 a beret,
or a straw,
as if putting on these various hats somewhat expressed
the quality of his soul, or suggested the range of it.


On the walls, on shelves,
are many odd and ends,
some apparently washed up by the sea,
which is a block down the street:

abalone and other shells, rocks, pieces of driftwood, a life jacket, rope, sea plants. There is one old-fashioned chair.

When the play begins, Harry is seated in the chair. A boy of nine or ten named Clay Larrabee is giving him a haircut.
Harry is reading a book, one of many in the shop.

CLAY: Well, I did what you told me, Mr. Van Dusen. I hope it’s all right. I’m no barber, though. You want to look at it in the mirror?
(He holds out a small mirror.)
HARRY: No thanks. I remember the last one.

CLAY: I guess I’ll never be a barber.
HARRY: Maybe not. On the other hand, you may turn out to be the one man hidden away who will bring merriment to the tired old human heart.

CLAY: Who? Me?
HARRY: Why not?
CLAY: Merriment to the tired old human heart? How do you do that?

HARRY: Compose a symphony, paint a picture, write a book, invent a philosophy.
CLAY: Not me! Did you ever do stuff like that?

HARRY: I did.
CLAY: what did you do?
HARRY: Invented a philosophy.

CLAY: What’s that?
HARRY: A way to live.
CLAY: What way did you invent?

HARRY: All philosophies sound good. The trouble with mine was, I kept forgetting to take it easy. Until one day. The day I came off the highway into this barber shop.

The barber told me the shop was for sale. I told him all I had to my name was eighty dollars. He sold me the shop for seventy-five, and threw in the haircut. I’ve been here ever since. That was twenty-four years ago.

CLAY: How old were you then?
HARRY: Old enough to know a good thing when I saw it.
CLAY: What did you see?

HARRY: O.K.-by-the-Sea, and this shop.
(He gets out of the chair, goes to the hat tree, [and puts on one of the many hats hanging there.]
--
CLAY: Well, anyhow, thanks a lot. I guess I'll go down to the beach now and look for stuff.

HARRY: I'd go with you but I'm expecting a little Saturday business.
CLAY: This time I'm going to find something really good, I think.

HARRY: The sea washes up some pretty good things at that, doesn't it?
CLAY: It sure does, except money.

(Clay with something in his hand, a smaller boy named Greeley with a bottle of sea water, and Roxanna with an assortment of shells.)

CLAY: I got an oyster here, Mr. Van Dusen.
Greeley: Miss McCutcheon [the young new teacher] claims there ain't a big pearl in it. 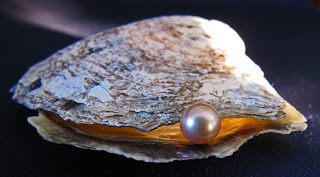 HARRY: (looking at Miss McCutcheon) Is she willing to admit there's a little one in it?
GREELEY: I don't know. I know I got sea water in this bottle.

TEACHER MCCUTCHEON: Mr. Van Dusen, Clay Larrabee seems to believe there's a pearl in this oyster he happens to have found on the beach.

CLAY: I didn't happen to find it. I went looking for it. You know Black Rock, Mr. Van Dusen? Well, the tide hardly ever gets low enough for a fellow to get around to the ocean side of Black Rock, but a little while ago it did, so I went around there to that side. I got to poking around and I found this oyster.

What has washed up on your shore today?


What beautiful pebbled moments of wonder? 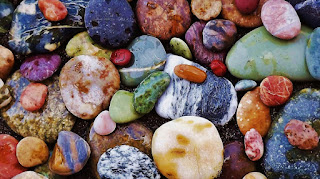 
Or what irritant, ache, troubling circumstance, or tragedy
has gotten lodged in your oyster mind and heart?

What creative choices can you make to turn this problem into a precious stone/moment/agate?