"Today torture has been reestablished.

"In many countries the system of justice quietly tolerates torture being applied before and simultaneously with the regular proceedings of police and prison officials in order to extract confessions form those accused."

"The amount of suffering thus caused every hour surpasses imagination. To this renewal of torture Christianity today offers no opposition even in words, much less in deeds."

Is this a news comment on the actions of the United States and its allies over the last 10 years?

Is this the beginning of a critique from one of the new Secularists lambasting American Christian leaders for their support of torture, inhumanity, nationalism, oppression of undocumented persons, preemptive war, ad nauseam?

Tragically, no. But thank God, Albert Schweitzer, a theist, an academic, concert musician, doctor, mission worker once did speak out these words, though it came long ago in back 1931.

Isn't it ironic, how in some ways so little changes in human ethics, especially not in Christian ethics, year after year?

Why is it that so many "Christians" now support actions that are so contrary to Jesus' words from 2,000 years ago?

Not too long ago, I even read of Christian leaders at present who claim slavery isn't inherently evil because Scripture supports and condones the institution! Furthermore, another Christian leader said that torture is God's will because the Old Testament supports torture!

But at least this one follower of Jesus did speak out 80 years ago against all oppression in the name of Jesus. 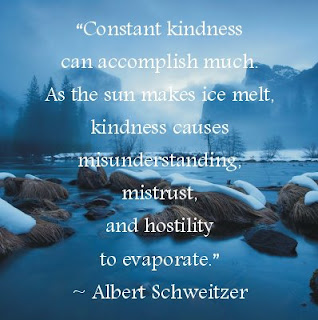 Here are a few more of his comments:

"Christianity has need of thought that it may come to the consciousness of its real self. For centuries it treasured the great commandment of love and mercy as traditional truth without recognizing it as a reason for opposing slavery, witch burning, torture, and all the other ancient and medieval forms of inhumanity in its name.

Only when it experienced the influence of the thinking of the Enlightenment was Christianity stirred up to enter the struggle for humanitarian principles.

The remembrance of this ought to preserve it forever from assuming any air of superiority in comparison with thought.

If Christianity, for the sake of any tradition or for any considerations whatever, refuses to let itself be interpreted in terms of ethical religious thinking, it will be a misfortune for itself and for mankind.

Christianity needs to be filled with the spirit of Jesus, and in the strength of that shall spiritualize itself into the living religion of inwardness and love that is its destiny.

Only then can it become the leaven in the spiritual life of mankind.

Because I am deeply devoted to Christianity, I am trying to serve it with loyalty and sincerity. I do not attempt to defend it with the fragile and ambiguous arguments of Christian apologetics.

I demand from Christianity that it reform itself in the spirit of sincerity and with thoughtfulness, so it may become conscious of its true nature."

Healing news from the past needed for today's religious blindness.

A Cure for Religious Cancer

A C.U.R.E. for the religious cancer of T.U.L.I.P. that has invaded the Christian faith of so many churches and denominations:

The Good News of Jesus Christ--that God loves everyone so much and calls us to turn from our selfish ways and live in love, truth, and goodness.

Conditional Election, based on God's foreknowing of our acceptance of his unlimited, endless, eternal love and goodness

Unlimited Atonement by Jesus, efficient for every human ever born

Reassured that God's Spirit woos everyone, that his love and desire for our rescue from sin is eternal and never ending

Essentially and eternally secure in God's love and truth and goodness

*Reposted from a year ago, because so many people need to hear the Good News instead of the bad news.

In the light of God's endless love for every single human through Jesus Christ,