The Significance of the Human Species from an Enlightenment Perspective

Why do quite a few modern thinkers (from Stephen Jay Gould to Yual Noah Harari to Sam Harris) emphasize minimizing, negating, discounting, dehumanizing, etc.—and that all humans lack inherent worth?

These naysayers deny so many essential characteristics that define what a human is—the reality of human conscious awareness, moral realism, the ability to reason, to think so we can transcend our limited space in time and place, our ability to choose among alternative actions, our moral responsibility, our creativity, hope for an open future, the amazing structure of our brain and body, our DNA, artistic creations, sense of wonder and awe, and so forth.

But enough of the negative. What I wish to write about is the significance of the Enlightenment Story of humans. 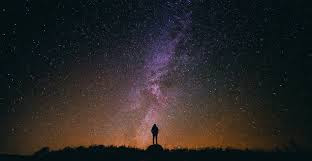 This story rejects superstition, tradition, intolerance, injustice, inequality, oppression, dogmatic pride, and instead emphasizes reason, the scientific method, openness, justice, equality, caring and compassion and cognizant humility toward the wonder and mystery of reality, the cosmos, the nature of sentient life, the human species, and human reflecting and seeking.

The story goes like this. Ultimate Reality brought into being and becoming the cosmos (this universe, or the multiverse if indeed there is more than one cosmos) about 13.8 billion years ago.

For transcendent reasons unknown to our limited human minds, over that vast period of time in an expanse beyond most people’s fathoming, U.R., popularly called “God,” brought about a complex movement of the physical which developed into galaxies, solar systems, and planets, etc. about 9 billion years ago.

Our Milky Way galaxy alone has over 100 billion stars, and there are over a trillion other galaxies in the observable universe!

Then, approximately, at least 3.5. billion years ago, 1 billion years after its coming into becoming, basic life first appeared. Life followed evolutionary paths which branched out in many directions until at some point sentient life, and then intelligent life (able to use reason and to reflect and to transcend) came to be and to become.

One form of this intelligent life appeared in a minor solar system on the edge of the Milky Way Galaxy, which is called by us, the human species.

For hundreds of thousands of years, we as a species remained primarily at an instinctive level just surviving in at times hostile environments, but yet sensing a transcendence in our short life that came out as basic reverence and awe at existence and life.

Gradually, humans kept seeking, discovering, and reflecting on reality, especially in the last 10 thousand years. Of course, humans often erred into superstition and delusion when trying to ascertain the meaning of it all. Learning isn't quick nor is it easy.

At present, multi-millions of humans still tend to swing off center to 2 extremes—1. that of an egocentric organized religious view where the human species, despite its brief tiny presence in a vast universe, is the very center of creation

2. the other already mentioned, a secular negating view where the human species is considered, inconsequential, a minor “bush” in the evolutionary jungle of life.

The Enlightenment view seeks a more balanced view, one that recognizes our species’ tiny presence and its very limited understanding of the in depth aspects of reality, let alone to know extensively why or even how it all came about,

which is amazed in wonder and awe that in our brief consciousness, awareness, reflection, reason, and transcendence we get to participate in this incredible adventure of reality.

We get to seek, to study, to test, to question, to grow however slowly toward greater and greater knowledge of this vast existence. And that, my friend, (to quote an old Quaker) is the joy and wonder of our living, and becoming aware.

Dan Wilcox
Posted by Daniel Wilcox at 3:22 PM No comments:

In this time of Simplistic Extremisms, Consider, instead, the PARADOX OF TRUTH

Religous thought often seems dysfunctionally extreme, so very false. On one side are the exclusivists, the theological determinists (who I have already dealt with in past blogs), ones who claim God only wills to save a limited number of humans, and the rest of us are preordained to Hell for his pleasure and glory. Pray tell me where the Good News is in that hopeless despair.

On the other side, are the inclusivists, the universalists who emphasize that all humans will be saved, that Hell will eventually be emptied. This sounds so good and has found strong support among great moral leaders of the past from Origen in the 4th century to the 20th century Greek scholar William Barclay. The position has recently been championed by Quaker writers Phillip Gulley and James Mulholland. But there is a huge problem here as well. See below. 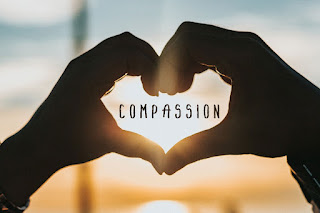 In the New Testament, Jesus, instead, speaks in paradoxes. Consider this statement: Matthew 7:14 NASB "For the gate is small and the way is narrow that leads to life, and there are few who find it."

Why does Jesus talk so exclusively at this point when elsewhere in the biblical text, he is the ultimate inclusivist/universalist? He emphasizes how God is not willing for anyone to perish in his or her wrong ways, that God is like a father who longs for the return of his wayward sons and daughters, like a woman who rejoices when her precious possession that was lost is found.

Here’s the key: As appealing as the universalism of the Good News is of what use is it to tell everyone that all people are loved, are of inherent worth, if we don’t help each individual change, overcoming his wrong actions?

For in fact, at this very moment multi-millions of particular individual humans are living in minor or major hells on earth or ‘living like hell’ hurting others.

Of what use are liberal religious platitudes, no matter how wonderful they sound theoretically, if in fact we aren’t seeking to help ourselves and others to change toward the Good, the Just and the Compassionate right now?

Of what use is theology claiming truth when at present Christians and Muslims are killing each other allegedly for God? Of what use is universalism when at present multi-millions of individuals are suffering loss, being selfish, living immorally, being discriminated against, drinking to excess, abusing others or being abused, making war, living in pride, greed, lust, envy...?

The Truth, the Good News, is only universal in the here and now when it is accepted, when we turn from our wrong thoughts, deceitful choices, egocentric ways, bad actions.

The True, Good, and Compassionate is constantly real, but when we as humans refuse to respond to the Truth, the Good, and the Loving in actual living situations, those moral truths are again crucified within us, and others suffer because of our wrong choices.

This is Jesus’ point! For example, Jesus loves the rich young man, but he can’t help him when the young man refuses to give up his hoarding, his greed and personally accept the truth and change, becoming generous and sharing.

The way to Truth is narrow though the Truth of the way is as wide as infinity:-)

In the Light of Truth, Justice, Equality, and Compassion,

Dan Wilcox
Posted by Daniel Wilcox at 11:17 AM No comments:

Stepping Through the Door in a Crisis

Most humans spend their time looking through windows…but others take a big step to meet a new challenge or to explore a different world than their past settled ways. They step through the door, cross the threshold and change their future. --Anon 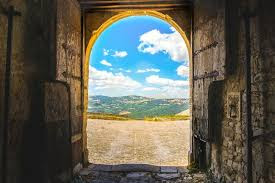 How might you step through the door to meet a new challenge or to explore a different world than your past settled ways?

How have you in the past made a major decision to cross a threshold?

What was the result of your decision?

At present we are facing a number of crises in 2020. Many are looking through windows, trying to keep what is or return to the past.

Write about how you might step through the door to explore a different world than your past.

Posted by Daniel Wilcox at 12:16 PM No comments: