Thinking About "i/THOU" This Morning

PREFACE:
(If you are in a hurry,
skip this.)

Do you find your eyes rolling over into the back of your head when you read the doctrinaire pronouncements of religious people? I admit I do, yes, have done a lot of “eyes to the back” in my time.

Many humans, not only atheists, repeatedly ask, “But how do these spokespersons and writers possibly know all this dogma about GOD, about Ultimate Reality? Aren’t they putting a broken verbal cart before infinite horsepower?"

And why do so many of these ‘know-it-all theologians disagree and contradict one another? There are over 200 different Baptist denominations alone.

Besides, becoming inspired by and thinking through and figuring out, and then applying Christ-like ethics to everyday situations and controversies--THAT is what the essence of humanistic Life is primarily concerned with, not abstractions and philosophical speculation.

So it’s with trepidation, and a strong sense of ‘what use is this’ that I begin to theologize. How could ‘i’ possibly have any sense of GOD’s ultimate nature when ‘i’ can’t even fix my broken HP printer?:-)

CUTTING TO THE CHASE—Thinking about “i/THOU”:

Variation of Jewish philosopher’s Martin Buber’s
famous phrase for our relationship with God. 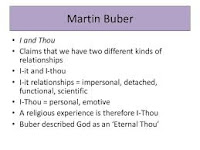 God is transcendental becoming as well as being.
God creates everlastingly behind all temporal causing.

“I will become what I will become” is one translation
of the one Hebrew word for God, YHWH.

Concerning this process philosophical view of existence:
"In traditional or classical theism, God was seen
as the supreme, unchanging being, but in Hartshorne’s
process-based or neoclassical conception, God is seen
as supreme becoming in which there is a factor
of supreme being."

"That is, we humans become for a while,
whereas God always becomes,"
Hartshorne maintains.
Stanford Encyclopedia of Philosophy

God always becomes, is always “ought,” continually journeys everlastingly. We don’t know any facts of God’s becoming outside of our own finite existence.

We do trust that the inmost essence of God’s becoming is love. God is love according to 1 John, John 3:16, and I Corinthians 13, etc.

So God, billions of human years ago, via the “Big Bang,” began to create Existence as separate from God’s self.
Within God's creative becoming was the desire for I-Thou. Eventually, via the process of evolution, sentient creatures came into existence, and finally conscious, transcendent, rational primates.*

Yes, God--ultimate or transcendent reality, the Good--becomes in everlasting ‘oughtness.’ God is much more than 'is.' Indeed, the Good is often against what is.

Creativity even in us humans on our very finite level isn’t an 'is,' but rather a continuing action, a becoming, a future potential.

(If you want the reasoning for the why of my blog post…)
*If God/Ultimate or Process Reality/the Good desired a creative i/thou relationship,
why did UR take about 14 billion years in this tiny section of the universe
to bring that about?

I have no idea. Remember, I don’t normally write speculative theology
or cosmology or metaphysics. So what am I doing here then typing on?

Also, we don't know whether or not there are other conscious, rational beings
in other solar systems. Carl Sagan and some other scientists think that
alien life must be abundant given the cosmic size of the universe, but
other scientists disagree. I don't know.

It's Monergists and other determinists (Augustinians, Muslims, New Age,
Atheists, etc.) who are thoroughly poisoning the human well with their fated views.

Their worldview which denies all human choice and all creativity, which makes
the universe a hard block of cosmic amber with us stuck in one tiny corner like
microscopic termites is nihilistic.

I experienced a strong need/desire/leading to give a different perspective.
That's all.
Amen;-)