God’s expression, his “Word,” his visible presence (the Incarnation) is in Jesus the Messiah, “The Word became flesh and set up his tent among us.” Jesus is the Image of God who is invisible. Jesus is our friend, ruler, leader, and deliverer.

The “Chosen One” came so we might experience and understand that God is ultimately and everlastingly love. “So now faith, hope, and love abide, these three; but the greatest of these is love.” Scripture also says, “Mercy triumphs over judgment."

God’s immanent, creative presence and influence, his “Holy Spirit,” convicts all of us to change direction and seek God. God’s Spirit lives within our spirit, and guides, communes, and comforts us as believers.

God is leading all of creation toward and to final perfection.

The ultimate glory of God is love—creating, giving, sharing, communing…

Posted by Daniel Wilcox at 5:54 PM No comments:

The Evil of Religious Double-Talk

I really hate religious double-talk, especially the kind whose end results are horrific.

Gangsters and gang members who strut their malign beliefs are abhorrent, especially when they openly prey upon the innocent and the young, but they can be faced and dealt with.

They wear their intentions proudly blazoned in garish tattoos and brazen behavior. Police know where they are at and can deal with them.

But the really insidious and diabolical are the serial crooks and abusers who wear sheep’s clothing of respectability, who carry out their crimes under the appearance of goodness and light. Who often aren’t caught, or not until long after their actions have hurt and destroyed many innocent people.

Isn’t this why traitors and spies are so despised? Humans oppose their enemies, though sometimes respect them even despite great destruction and killing. The most famous example of this is the meeting between Robert E. Lee and Ulysses S. Grant at Appomattox Court House.

However, in contrast, spies such as Civil War soldier, Will Talbot, got hanged. 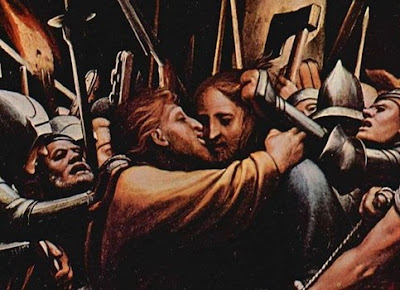 Most people can’t stand foes who sneak around trying to appear as their friends. Benedict Arnold was one of the great heroes early in the American Revolution, but his name is not famous for his soldiering.

The Judas kiss isn’t a hateful allusion for nothing.

An obvious disease is treatable; a hidden cancer which destroys and is found too late leads to death. A really bizarre cult is at least “good” in the sense that its malignancy is so obvious.

What is very dangerous is the Christian message which appears so good, but has hidden horror and destruction within.

I must admit that is why, in a strange sort of way I do prefer hyper-theological determinists, the so-called ‘high’ supralapsarians of the Christian world. Not that, they are easy to face. I still remember the first speaker I encountered at a church Bible study on Philippians when I was in my late 20’s.

The spokesperson claimed every rape and murder is planned by God! That God actually has foreordained the eternal damnation of most of us humans. And later I learned that they believed God even planned the Jewish Holocaust for his “own pleasure and glory”!!

Whew! Needless to say, I was shocked and doubly horrified, having been raised in the loving Good News of Evangelical Christianity as preached by leaders like Billy Graham and Charles Finney and John Wesley and Menno Simons and St. Francis and Justin Martyr and Polycarp; and in fact all of the early Church Fathers!

When I became aware of my own sins and guilt, I accepted Jesus as my Savior because of the overwhelming love of God for us--for all the billions of us, every last one of us, and that God forgives us in Christ, that God is like a father who dearly loves every single human he has ever created, even those of us who have made so many wrong ethical choices.

“The wonder of it all” (to quote a famous revival hymn by George Beverly Shea) that God would have sent Jesus to lead the way to the Light for only one of us, even for me, even if I had been the only wrong-doer in the whole world! Joy unspeakable and praise to the glory of our wondrous God of love.

So I did fight against the horrific theological determinism of a rape-and-murder-planning God with all of my heart, with all my soul, and with all my mind. This was overt brazen, twisted Christianity I could fight and did.

But then much later I discovered other great leaders of Christianity, who I admired, actually, also, believed in this same horrific vision of God, but they hid their religious betrayal within religious double-talk.

For example consider some of these very good statements: "I say every man who comes to Christ shall be saved."

"The first piece of good news that I have to give you is, that God has not forgotten you. You are a lost sheep, and you have almost forgotten your Shepherd; perhaps, you have altogether forgotten him; but your Shepherd has been counting over the number of his sheep, and he finds that there is one missing, for there are only ninety and nine where there should be a hundred, and he is deeply concerned about the one that has gone astray."

"God has not only remembered that there is such a person as you but he remembers you with pity."

"You have nothing to do, sinner, but to give yourself up to the leading, guiding, directing, assisting, quickening of the blessed Spirit of God."

Don’t they sound like the glad tidings of the Gospel?

Aren’t they blessings of joy, showing the great love of God for everyone?

No, they are the Judas Kiss!

For this famous Christian leader, Charles Spurgeon, (like so many other famous leaders) actually means the exact opposite of his direct statements.

Spurgeon doesn't think any sinner "can give yourself up to" the Spirit of God. On the contrary, elsewhere he states (like all real theological determinists) that a human must first be regenerated against his will.

No one has any choice; every infant is born totally depraved, evil.

And Spurgeon declares that God has predestined only a limited number of humans to be rescued.

To hell with all of the billions of us other humans.

His book on salvation and a number of his sermons, his “Gospel” is nothing of the sort.

Spurgeon's speeches are a Judas kiss, are a horror to behold, nothing more nor less than
the worst of the worst covered over by double-talk.

Let Spurgeon clarify his real meaning with his own words:

But then this famous preacher of so-called good news speaks of the “Doctrine of Grace”: “There is no soul living who holds more firmly to the doctrine of grace than do I.”

Isn’t that another word for God’s love for everyone—that we can’t do enough good to be acceptable to God, but “God was in Christ reconciling the world until himself” (2 Corinthians 5:19 and John 3:16)?

The famous preacher doesn’t mean “grace” in that sense at all. Instead, what he later clarifies is that he means this: TULIP—a systematic acronym for John Calvin’s statement:

"They again object, Were not men predestinated by the ordination of God to that corruption which is now held forth as the cause of condemnation?
If so, when they perish in their corruptions they do nothing else than suffer punishment for that calamity, into which, by the predestination of God, Adam fell, and dragged all his posterity headlong with him. Is not he, therefore, unjust in thus cruelly mocking his creatures?"

"I admit that by the will of God all the sons of Adam fell into that state of wretchedness in which they are now involved; and this is just what I said at the first, that we must always return to the mere pleasure of the divine will, the cause of which is hidden in himself."
Chapter 23, 4 Institutes of Chirstian Religion
John Calvin

Then Charles Spurgeon goes on to say:
“There is no such thing as preaching Christ and Him crucified, unless we preach what nowadays is called Calvinism. It is a nickname to call it Calvinism; Calvinism is the gospel, and nothing else."

The twisted tulip of Calvinism

When Spurgeon says, “I say every man who comes to Christ shall be saved. I can say that as a Calvinist, or as a hyper-Calvinist, as plainly as you can say it"
one has to decipher his double talk because according to his Calvinism, the vast majority of humankind was foreordained to eternal damnation by God before the beginning of Creation.

Double-talk, how hateful and destructive it is. How insidious!

According to Calvinism, God has willed for most of us to be lost forever, eternally pre-damned from before time began, for the “mere pleasure of the divine will.”

Lest we missed this hidden point, Spurgeon adds: “I do not serve the god of the Arminians [John Wesley, Charles Finney, George Fox, Menno Simons, Arminius, etc.] at all; I have nothing to do with him, and I do not bow down before the Baal they have set up; he is not my God, nor shall he ever be; I fear him not, nor tremble at his presence...”

Finally, no more double-talk like his earlier fake evangelistic words.

Just the horror of no hope for most of us humans because we were foreordained to eternal damnation, created at conception by God as evil sinners and incapable of repenting. God didn’t send Jesus for us and doesn’t send his Holy Spirit to change us...

So much for the “good news” of the Judas Kiss!


Next time the really GOOD NEWS of Jesus…