The “Fingers of God,” the Jesus of the “Twisted" Winds

"Jesus rules the wind. The tornadoes were his."
John Piper

News from a famous, highly praised, Christian leader
after the tragic tornadoes this past month:
“Why would God reach down his hand and drag his fierce fingers
across rural America killing
at least 38 people with 90 tornadoes in 12 states, and leaving some small towns
with scarcely a building standing, including churches?"

"..God alone has the last say in where and how the wind blows.
If a tornado twists at 175 miles an hour and stays on the ground
like a massive lawnmower for 50 miles,
God gave the command..."

"Jesus rules the wind. The tornadoes were his.”
John Piper 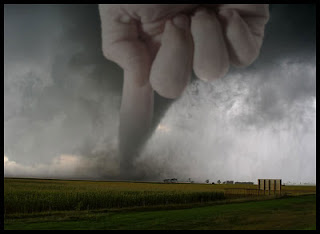 Whew! No wonder there are more and more outspoken atheists.

Piper does go on to say that “before Jesus took any life in rural American, he gave how own on the rugged cross.” Of course, as Piper has made starkly clear in the past, Jesus gave his life only for a limited number of humans. All other humans throughout history were foreordained to eternal torture.

As one blogger, pointed out, such Christianity is “twisted.” (http://loveradically.com/2012/03/05/john-piper-twisted-theology-on-twisters/

No wonder that many people are saying that Christianity’s god is a moral monster.

Though this "twisted" theology isn’t near as evil as other horrific claims by current Christian leaders which include the assertions that the Holocaust, and every rape and murder and molestation, happen for "God’s glory" and "good pleasure"!

"God not merely carries all of the universe’s objects and events to their appointed ends, but he actually brings about all things in accordance with his will."

"In other words, it isn’t just that God manages to turn the evil aspects of our world to good for those who love him;
it is rather
that he himself brings about these evil aspects for his glory..."

"This includes—as incredible and as unacceptable as it may
currently seem—God’s having even brought about the Nazis’ brutality at Birkenau."
John Piper, Suffering and the Sovereignty of God


The theologian William Barclay’s response
to such Christian views was “Your God is my devil."

"Your God is the God I don’t believe in.”

Oh Father, please help us to persevere in this hellish time of complete theological darkness!

Who Do You Say that I Am?

27 Yeshua and his disciples went out to the villages of Caesarea Philippi, and he was asking his disciples in the road and he said to them, “What is it the people are saying about me as to who I am?” 28 Some said, “Yohannan the Baptizer”, and others “Elijah” and others, “One of The Prophets.” 29 And Yeshua said to them, “But what is it you are saying about me as to who I am?” Shimeon answered and he said to him, “You are the Messiah, The Son of the Living God.” 30 And he admonished them that they should not speak about him to anyone.
Mark 8::27-30 Aramaic Bible in Plain English C2010

Sometimes, of late, I feel (not think) that maybe we modern Christians need to do just that—not “speak about him to anyone”!

Because the word/image Jesus has become such an ‘empty bucket’ that means almost anything!

Here I am not dealing with millions of humans who use the name as a curse word, meaning nothing, but am speaking of the millions who speak seriously of Jesus.

Yet there is such an endless modern babel of voices disagreeing about who Jesus is. In this I am, also, not speaking about the new atheists or the new agers or any-and-all-kind of secularists or any adherents of various other religions.

It’s many Christians who claim, seemingly, almost ‘diabolical’ differences about who Jesus is!

Such babel-mania must be abysmally confusing for most people who come in contact with various Christians groups who claim opposing, even contradictory, images/descriptions/qualities/essences for Jesus.

I am tempted to give a few of the more unusual examples, but as the book of James says to do, I will resist temptation. Giving examples will surely side track us down endless theological rat holes (to vary the allusion to Alice In ‘Wanderland’)

In fact, at this aged point in my life as I said above, I’m even wondering—Heaven do help—us if we need to stop using the words “Jesus” and “Christ” because they mean so many different descriptions and different ideas and different concepts that like the words “Christian” and “God,” they basically mean nothing or anything.

What do YOU think?

Do the very many contrary views of “Christians” bother you, or is this only my own particular theological packrat problem? (My wife thinks I think theology too much;-)