Heroic: A Passing Teenager Saved a Mother and Children from Their Burning Car

"A teen rescued a mother and three children, including a 1-year-old in a car seat, from a burning car in Waterbury on Wednesday and police have honored him for his bravery.

The parking lot at 24 Swift Place in Waterbury still has charred remains of an SUV, which was fully engulfed in flames when first responders arrived Wednesday afternoon. The scene could’ve been one of a terrible tragedy if not for the courageous act of an 18-year old. 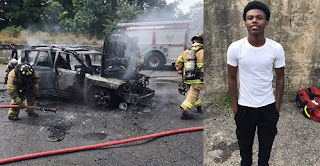 Trapped inside the SUV, just before it burst into flames, were a mother and three small children.
“I felt helpless,” said Latrisha Chambers of Waterbury. “All I could do is pray. I was screaming for help.”

Jaylah, Ellie and Isaiah, ages 9, 4 and 1, were inside with their mother before Justin Gavin ran to their aid.

Gavin, the passing teenager said, “As I saw the car coming, I saw the little kids in the back, I kept yelling, the car’s on fire. The car’s on fire,” said Gavin, who was just getting off a bus in the area when he witnessed what was happening.
"...said he saw the flames flickering beneath the car, beginning to build when he started to help the children from the burning vehicle.
“I told the little girl to unbuckle her seatbelt as fast as she can so when I threw open the door, I could just pull them out,” said Gavin.

Chambers said she was in shock during the frightening moments while Gavin was assisting.

“He’s like get out, get out,” said Chambers. “Everybody’s like you got to get out, it’s on fire and I didn’t know it was on fire.”


Gavin said he doesn’t scare easily but in this case was nervous. “I was kind of scared because I’ve never seen a burning car before.”

To recognize the heroic effort, Waterbury Police honored Gavin Wednesday, giving him something normally reserved for officers themselves, the chief’s commemorative coin.

Meanwhile Chambers has a message for Gavin, the person she refers to as her angel. “There’s nothing I could do to show you or ever repay what you did for me and my children, ever,” she said.

The event may have had an altering effect on Gavin’s life too. Before this he had dropped out of school. Now he is not only considering returning but is thinking about a career as a first responder.

“I probably most likely will join the police force or become a firefighter,” he said. “Because after yesterday I feel like there’s more people that can be helped.”

You can watch the video of police honoring Gavin..."
Posted by Daniel Wilcox at 7:04 PM No comments:

"Half of U.S. Christians say casual sex between consenting adults is sometimes or always acceptable"--So contrary to what is true; contrary to moral realism

Wow! These PEW statistics show most Americans reject what is a central moral truth--that sexual relations ought to be lived in a life-long committed relationship of a loving couple. That sexual promiscuity is ALWAYS morally wrong.

So bizarre that even half of U.S. Christians say "casual sex...is sometimes or always acceptable."

What I am convinced of, however, is that moral realism is true--that fidelity and commitment are true for all humans.


But according to PEW not any longer.


FROM PEW: "Half of Christians say casual sex – defined in the survey as sex between consenting adults who are not in a committed romantic relationship – is sometimes or always acceptable. Six-in-ten Catholics (62%) take this view, as do 56% of Protestants in the historically Black tradition, 54% of mainline Protestants and 36% of evangelical Protestants." 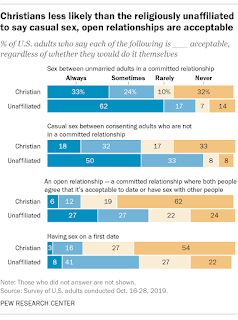 Memories: a time for in the fall...

In the fall a time for springing
childhood,

festivals of Monet-splashed leaves
that my sister and I raked and piled high
in the deep ditch in front
and jumped down into,

and our large garden behind the parsonage
with pumpkins, melons, and withered corn rows...

and lightning bugs on the wane,
flashing on and off

Posted by Daniel Wilcox at 9:36 AM No comments: