Our third daughter, Hope, learned-disabled early, Struggling with the squiggles and numeric symbols

Of unseen realities, of knowing, that set the stars In motion and our human minds in transition.

Her childish zest died while, as her father and provider, I practiced disabling late, raised to belief's unreason 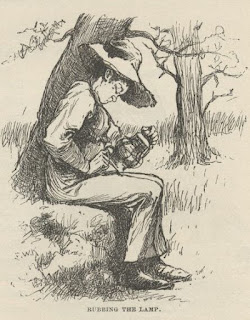 In the rigid way of Huck's Miss Watson, so stubborn In righteous doctrine, ignoring our doctor's suggestion, Not giving Hope medication, but certain in literal petition.

So I prayed time-round-the-three for our daughter's minded healing, But just like gullible Finn and his never-gotten fishhooks,

Hope got none, and I— doubt, ill-gotten mishap, and bilge, Eventually lessening into cynicism, the wounded death Of an ash-filled, but empty-petitioning/requesting mouth.

Yet unlike Huck, to this day I keep reeling out petitions, Focusing like the Widow (Huck's other guardian),

On heartened prayer, the learning of spiritual gifts; But not even the gentle fish lures of patience

And boundless joy ever ripple my faithless way; I, too, become the lost orphan in the dying of trust.

No longer a fisher of miracles in the doubtful churning, Of the endless surging views of oceans seven

The world round, I struggle between trust And reason, earnest but lost in cruel confusion

Fearing those extremes — nihilistic negation And fishy delusion — doubting all to a hellish end.

So dead to minded school, the late prescription And she was upward raised, yes, recovering soon A zest for learning — early for her, way late for me –

Except to say the real hook of it all is that True knowing is not gulping barbs of pious deceit,

Nor being gilled or gulled into the dying of truth, But yearning and learning — like Descartes and Kant

Of old — finding in humble, reasoned trust The poetry and prose of spiritual growth, A Godly way of reasoned becoming,

First published in The Centrifugal Eye then in the published poetry collection, Psalms, Yawps, and Howls

-- *From Huck Finn: “Well I got a good going-over in the morning from old Miss Watson on account of my clothes; but the widow she didn't scold, but only cleaned off the grease and clay, and looked so sorry that I thought I would behave awhile if I could. Then Miss Watson she took me in the closet and prayed, but nothing come of it."

"She told me to pray every day, and whatever I asked for I would get it. But it warn't so I tried it. Once I got a fish-line, but no hooks. It warn't any good to me without hooks."

"I set down one time back in the woods, and had a long think about it. I says to myself, if a body can get anything they pray for...why can't the widow get back her silver snuffbox that was stole? Why can't Miss Watson fat up?"

"No, says I to myself, there ain't nothing in it. I went and told the widow about it, and she said the thing a body could get by praying for it was "spiritual gifts." This was too many for me, but she told me what she meant -- I must help other people, and do everything I could for other people, and look out for them all the time, and never think about myself."

"This was including Miss Watson, as I took it. I went out in the woods and turned it over in my mind a long time, but I couldn't see no advantage about it -- except for the other people; so at last I reckoned I wouldn't worry about it any more, but just let it go."

"Sometimes the widow would take me one side and talk about Providence in a way to make a body's mouth water; but maybe next day Miss Watson would take hold and knock it all down again."

"I judged I could see that there was two Providences, and a poor chap would stand considerable show with the widow's Providence, but if Miss Watson's got him there warn't no help for him any more."

"I thought it all out, and reckoned I would belong to the widow's if he wanted me, though I couldn't make out how he was a-going to be any better off then than what he was before, seeing I was so ignorant, and so kind of low-down and ornery.”

Wise words of yearning and learning from The Adventures of Huckleberry Finn by Samuel L. Clemens

-- In the Light of Hope and Reason,

Yearning and Learning, Trust and Skepticism,

Ideals and Science, Imagination and Fact...

Posted by Daniel Wilcox at 11:25 AM No comments:

Musing about Prayer, the Exacting Scientific Study, and Reality

Does prayer change things as the famous aphorism claims?

Does God literally answer petitionary prayer—everything from requests for a parking place to the healing of severe disease to defeating the enemy in war? 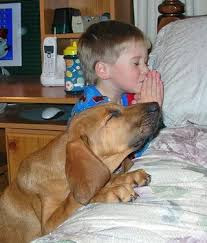 Fifteen years ago, an exhaustive scientific study was done on praying for heart surgery patients with a grant from the religious Templeton Foundation.

“There were no statistically significant differences in major complications or thirty-day mortality.” Wikipedia and Harvard Gazette, "Prayers don't help heart surgery patients; Some fare worse when prayed for"

But some raise the important question is prayer meant to be an action looking for literal results?

Most theists would say so including famous philosopher and science writer Michael Gardner, a theistic skeptic, cofounder of the modern Skeptic Movement. When it comes to miracles, Gardner disdains belief in those supernatural events, what he calls the superstitious “finger of God,” but Gardner argues for the reality of prayer!

In his book The Why’s of a Philosophical Scrivener Gardner states that petitionary prayer is real and true. He agrees with fundamentalists, creedal Christians, Muslim, Orthodox Jews that humans can literally petition God for help.

Most Atheists emphasize the exact opposite, that all prayer is a severe delusion.

This is in contrast to a third view of prayer best expressed in The Adventures of Huckleberry Finn by Mark Twain. Huck Finn is told by the Fundamentalist Ms.Watson that prayer works, so he sets about praying for fish hooks. 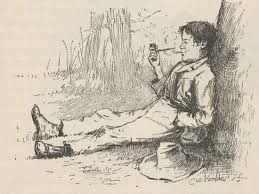 But none come. He waits longer, still none come. Huck is keenly disappointed—down right angry--and tells the Widow Douglas so. She gently corrects his confusion, telling him he has misunderstood the true nature of prayer.

Widow Douglas emphasizes that prayer isn’t for getting what we want, even if we are asking for something good.

Then what in heck is the nature of prayer? According to the Widow Douglas, prayer is for moral and spiritual uplift!

But is that so?

Maybe the Widow Douglas was right—that the true nature of religion is spiritual, not literal at all. Consider even the simple prayer of grace, that form of prayer that many religious humans say before eating supper where they thank God for their food. Or goodnight prayers with little children.

If we look at the actual situation of prayer at the dinner table, we see that God has had literally nothing to do with the getting of the food on the family’s plates. The parents at the table have gone to Wal-Mart and purchased salmon, green beans, and wheat bread from money they earned working 50 or 60 hours a week as engineers, clerks, or mechanics; the store owners have bought the seafood from ocean boats and produce from farmers; the farmers have planted and harvested the crops, and the fishers have gone out into the wild Pacific and caught the salmon, etc.

So where does God fit into the equation?

The answer is a spiritual one as Widow Douglas said. For example, the famous German thinker Fredrich Schleiermacher wrote that religion is a transcendent experience, a total abandonment to, and reliance on the Infinite.

God is the ultimate, infinite source of the meal, even though he doesn’t literally do a single action to bring it to the evening table. No, God isn’t literally in the business of growing corn, finding parking places or supplying fish hooks, healing diseases, etc. unlike what most humans think.

How many times have we humans said grace at meals, prayed for loved ones, etc. and felt uplifted and united!

The number is probably almost endless; and there are the countless prayers for individuals living in tragic circumstances, world crises, and prayers for our own spiritual growth.

PRAYER CHANGES US, not bad situations or terrible circumstances.

We humans in prayer can become more humanistic beings given to loving others as ourselves, even our enemies as Jesus, Martin Luther King, and othe wise leaders have stated.

But Huck and most people aren’t impressed with such an view. What they want are fish hooks, healing from diseases, success in their careers, and so forth.
Becoming more loving, kind, generous, and patient is, granted, nice but a real let down.

Literalism has its hooks in most of us, either believers or disbelievers.

Posted by Daniel Wilcox at 3:46 PM No comments: