Posted by Daniel Wilcox at 11:02 AM No comments:

Randal Rauser, a systematic theologian, claims: “Personally, I struggle with all sorts of impulses to be prejudiced against other people. This is a manifestation of the more general struggle with sin and the fallen human nature. Day by day, I need to seek and call out my own internal fallen impulses to otherize and dehumanize my fellow human beings.

"Wokeness is at its best not as a punctiliar moment of revelation equivalent to the old Methodist perfectionism but rather an invitation to examine oneself and become woke every day to one’s own sin and wickedness including in the area of race.”
-Randal Rauser, Canadian Systematic Theologian at Taylor Seminary.
https://randalrauser.com/2021/11/a-review-of-owen-strachans-debate-performance-on-unbelievable/

Rauser appears to defend the claim that systemic racism exists at present in the United States even though it isn’t as bad as during Jim Crow and antebellum slavery.

While I agree that in some places and among some individuals overt racism does still exist. I think that the claim there is “systemic racism” in all of the U.S. is not only untrue, but is an ideological falsehood of the worst sort.

A number of Black scholars including Thomas Sowell, Professor of Economics, author of A Conflict of Visions and Walter Williams, Distinguished Professor of Economics at George Mason University have emphasized that while some racism does exist and needs to be strongly opposed, “systemic racism” doesn’t exist in present day America. 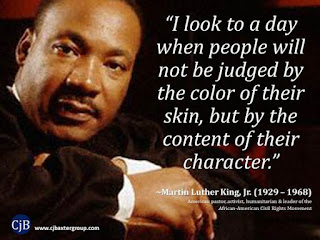 I do agree with Rauser that each of us do need to regularly check his/herself see whether or not we are being biased against others because of race, sex, class or nationality.
However, I don’t agree that all Americans and Canadians “struggle with all sorts of impulses to be prejudiced against other people” because of “sin and the fallen human nature.”
Unlike Rauser, I don’t believe in the creedal doctrine of Original Sin, don’t think humans are born sinful, totally depraved, “in essence, evil” because of Adam’s eating a fruit, like the vast majority of Christians do.

Original Sin or Systemic Racism of Whiteness and similar ideological claims have no basis in reality.

1. Geneticists seems to have demonstrated that there never were 2 humans 6,000 years ago who were the origin of all the billions of humans today. Instead, the evidence so far indicates that all of humankind came from a few thousand individuals in existence many thousadns of years ago.

2. Original Sin is a pernicious doctrine that claims what the alleged wrong the ancestor of all humans did thousands of years ago was innately transferred to each infant of him and down to each grandchild, great-grantchild, etc. This total depravity, sinfulness is so innate within human nature every infant upon conception and birth has this sinfulness within them, unable to overcome it. Indeed, according to this doctrine, even good actions by each of us, are actually sinful!! A wrong action by another person, even if it was by our parent can't be innately inserted within us as children because we are their children.

Even if such a biological claim could be possible (which it isn't), that would be utterly evil, to blame a child, even a day-old infant for what wrong-doing his parent did.

This strange doctrine of Christianity also demeans the Creator. A good Creator would never insert utter sinfulness into each new human infant, no matter how sinful his/her father was.

Original Sin is also a denial of human choice, creativity, ability, and inherent worth.
Etc.

This new ideological claim of "woke" humans, that whites are guilty of systematic racism stereotypes unique individuals based upon such a superficiality as skin color. It's claim all humans with white skin are racists is very untrue, unfair, and delusionary.

Woke believers ought to read a good scholarly book on genetics. Geneticists have discovered that there is more variation within some racial groupings than there is between 2 different racial groups!
Furthermore, such a claim is contrary to the history of humankind. Racism isn't unique to one racial grouping. It appears in various contexts among all human groups.
While European whites, especially the
British, were mostly racist against Blacks in North America and Africa in the past, other races and nationalities in different times were also given to prejudice.

Japanese have been very prejudiced against non-Japanese.

In history, North Africans enslaved over a million white Europeans over a period of 300 years!

There was plenty of prejudice, abuse, and enslavement in the Americas before whites ever showed up here. Various native American groups treated other native groups unfairly, even massacred the "other."

Instead, of prejudice and racism being something unique about humans with white skin, humans generally are given to IN GROUP VERSUS OUT GROUP bias, and to unfair treatment toward others, regardless of the color of skin in particular.

We all can fall for the will to power, the temptation to generalize and stereotype, etc. For example, BLM leaders often did it on their website in their claims that all police officers systematically oppress Black people. That is factually wrong.
Heck, many thousands of officers are Black, Asian, Hispanic, etc.
The Police Chief of Chicago is Black as is the mayor; the Attorney General of Kentucky is Black, etc.

In some cities, a few officers have been shown to be racist, but that is a regrettable minority, not most, let alone all police officers.

What is often the case in many of these infamous cases of alleged racism by officers is that people of color aren't attacked by officers because of their color but because the individuals are engaging in criminal activities and resist arrest.

In only one protest by BLMers in Chicago, over 50 police officers were injured! The Chief of Police documents the riot-violence of the protesters in a news video.
Noting about racism at all.

Seek the Good, the True, and the Just,

Dan Wilcox
Posted by Daniel Wilcox at 10:32 AM No comments: 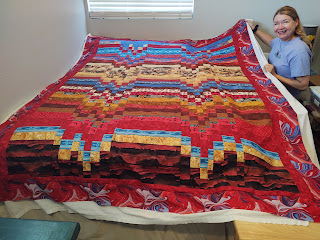 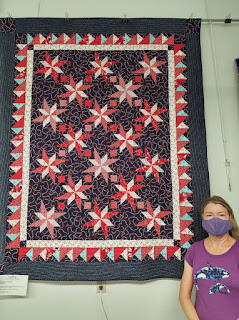 Anchors Away to Alaska
by Betsy Wilcox
--from N.Y. design
by Deb Tucker 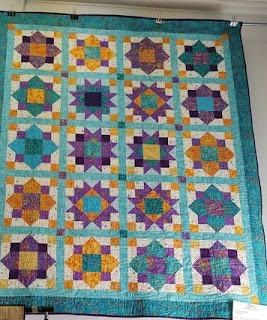 Rollin' on the River
by Betsy Wilcox
Most of the fabrics for this quilt
were purchased in Hannibal, Mussouri
om the Mississippi River, which was higher
than flood stage when we were there, after
our going to the Missouri Star Quillt Conference. 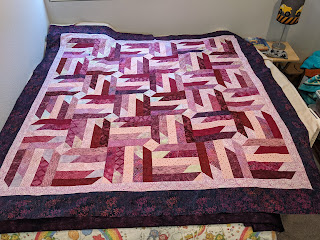 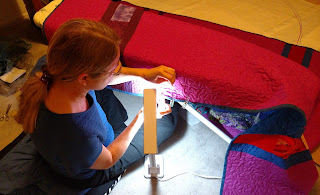 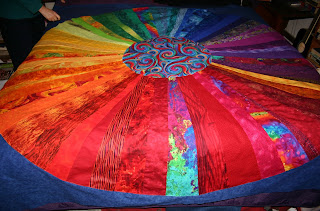 Betsy sewing on Psycheldelic, a quilt
for me based upon when I lived in Haight-Ashbury in spring 1967. 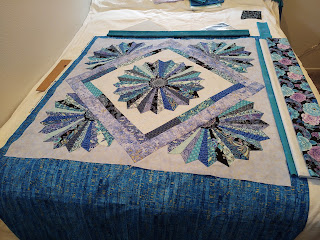 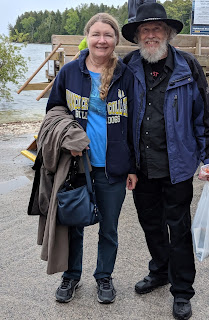 Here, Betsy and I are
getting ready to take a
tractor ride out to an island
lighthouse on Lake Michigan,
after the M.S.C.

Reflecting on life and death, which comes to us all

Personal: Two Poems for My Dad 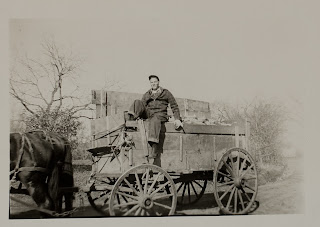 My dad at the end
down to ice water and pain

Last breath and his stretched skin over skull,
Looking like a turkey’s throat--

Cut through
No Thanks
---giving

The undertakers come,
the younger looking like a freshman on a date

Onto their white winding sheet,

“Rolled away...
all the burials, rolled...”
They wheel the thing outside

barely missing a left
edge of his big screen TV

No burning light,
“no raging against the dying”...

Dad’s last act
--breathing with a tube and drinking;

Not quite, when I arrived
only 7 minutes before the Taker

And joined my mom and sister at his contraption bed,
I told Dad my last joke,

My dad felt my hand--
Then not.

Am I still deaf to death
Even Dad’s demise?

Hard to ‘ear’ like him,
No mourn, only even
Less
because of all that immortal noise

The daily barrage of clamor

How can one imagine

150,000 /zeros/ every day/sunset
around the global 0
spinning
in
the spaced black darkness;

We all await that last straw

Like through a screen door in a tornado’d torrential storm;

Another human’s missing,
Only hole in water
after a finger’s withdrawn.

Billions in the past, no more, one less

Dusted to stars,
scattered to the cosmic wind,

No more,
Not even less;

Posted by Daniel Wilcox at 5:25 PM No comments: