What in HELL for? That’s right, that’s where the New Testament says destroying actions come from, from Hell.

All because of their selfish land claims—both by Arab and by Jew. 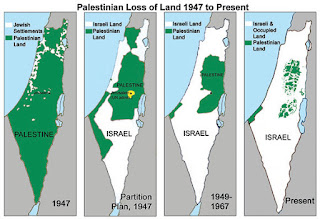 How do Arabs feel when they have lived on land for many years, (some families for over a 1,000 years!), but their land is confiscated by the Israeli army and given to immigrants from New York or Russia?!

How would you feel if your Arab family owned the deed to your own land but now the Israeli government is trying to take it away because they want it and claim the land is theirs because their ancestors lived on it over 2,000 years ago?

True story! You can read about it at World Vision’s website: http://blog.worldvision.org/stories/we-refuse-to-be-enemies/

On the other side…

How would you feel if your Jewish family can trace its ancestry on the land back to Bible times, but terrorist groups like HAMAS want to exterminate them, and keep launching deadly rockets to slaughter all, and then take over their land?

Plus, you need to keep history in your sites…

Only 5.3% of Palestine was Jewish!

Where then did all the Jewish people come from? From elsewhere...

But, of course, many people think since Jews once dominated in Palestine before 70 A.D., they have a right to return, as many, many thousands have from all over the world, especially from Europe and America.

Let’s assume so, but does that give them the right to intimidate and persecute Arabs and take away their land?

Please read what Amos has to say about injustice in the Jewish Bible.

We live on the Central Coast of California on what used to be Indian land. Because Indians used to live on this land (but were driven off long ago by the Spanish and Americans, like the Romans drove off the Jews), does this give Indians the right, now, to come back onto our property, kill my family, and confiscate our land?

Even if the Indians have historic right to the land, it certainly doesn’t justify their confiscating it by force of arms, and by killing people who now live on the land and then giving the land to their cousins from Florida.

Both Jew and Arab are violating their own religious scriptures, and are basically being selfish, because they won’t share.

<< James 4 >>
American King James Version
"From where come wars and fights among you? come they not hence, even of your lusts that war in your members? 2You lust, and have not: you kill, and desire to have, and cannot obtain: you fight and war, yet you have not, because you ask not."

Posted by Daniel Wilcox at 12:51 PM No comments: