A Few Books--Lighthouses of the Spirit


A few books--among the many tomes I've read over the years--have been lighthouses to me by which the Spirit of God has guided me past the Scylla's and Charybdis's of this
temptuous, troubled life. 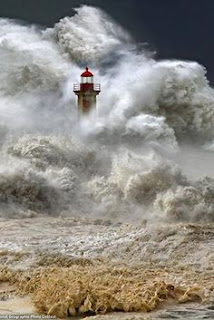 When I have failed, such books have helped rescue this wayfarer from life's raging sea and helped in my recovery.

In the next few weeks, I'll take time to reflect on some of these shining lights. I suppose it goes without saying that the Bible is the foundation.

However let it be extremely clear--carefully cautioning all you readers--that Scripture is Light only if interpreted by the good reasoning and reflecting faculties that God has given us humans.

Tragically the Bible has been sincerely wrongly applied resulting in much suffering, tragedy, and many horrors in history done by the Roman Catholic Church and the Reformers, etc.

For instance, based on the Bible, Martin Luther spewed forth his hate and invective against the Jews, calling on his readers to destroy their synagogues, confiscate their Jewish Bibles, and so forth. For hundreds of years millions of people followed such immoral advice until finally one generation carried these appalling misinterpretations of Scripture to their demonic conclusion.

I hope it is very clear to the reader that I am NOT a literalist, nor when I recommend a book do I necessarily subsribe to how others have interpreted its words. For that matter some of the books which have been lighthouses to me, are also seriously flawed and cracked in their lenses. I have been helped despite their errors.

Second on the list, after the Bible, would have to be--I have no idea:-) I won't try and do a descending top ten, but cast out the winners like bread upon the waters.

The Eternal Promise (and A Testament of Devotion) by Thomas Kelly;

The Whys of a Philosophical Scrivener by Martin Gardner

The Cost of Discipleship by Dietrich Bonnehoffer;

Clowning in Rome by Henri Nouwen;

The Nature and Destiny of Man by Reinhold Niebuhr;

Dynamics of Faith by Paul Tillich...

These books reached me when I was adrift., drowning in American Christianity's arid doctrinal disputes while my own personal life was barren, and I was bereft from seeing so much evil done in the name of Christ.

To upside-down the metaphor, these books were Living Water in my life when all else was empty--only broken cisterns, poisonous wells, mirages of deception...

I often re-read parts of these books when I get discouraged or am caught in the morass of some temptation or wrong action or faced with daunting circumstances.

Good evening, Daniel,
Thank you for the advice on books. I have heard about a few of them. Personally, my favorite book when it comes to faith - and religion is "The Son of Man" by Alexander Men. The author was a Russian priest, and this was a book on his understanding of Christianity, Jesus Christ and God.
Thank you,
Katya