Probably in human history there is no sin, no evil worse than human warfare.

Literally millions upon millions of innocent people have been slaughtered in the name of God. 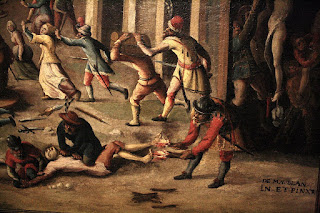 That doesn't even deal with the multi-millions of soldiers who chose to kill each other in countless battles.

Over 100 million unarmed civilians were slaughtered in the 20th Century alone.


Even we Friends started out supporting religious war. According to First Friends a biography of George Fox by H. Larry Ingle, some early Friends were in the New Model Army of Oliver Cromwell during the English Civil War. Those devout Christians would go off to stealing, destroying, and killing while singing, joyously, psalms to their God. 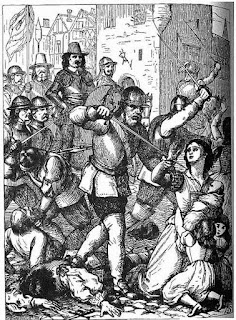 "The peacemaker has the kingdom and is in it, and has Dominion over the peace-breaker, to calm him in the power of God...The days of virtue, love and peace are coming, and the Lamb...shall have the victory."

Indeed, Quakers came to speak of "The Lamb's War"--the spiritual war by which all forms of human warfare would be defeated by God's love, by the cross of redemption.

One of the best true stories of this "Lamb's War" concerns a Christian attacked by two thugs in New York City. In the process of robbing him, the criminals poked out his eye!

However, rather than wanting and seeking revenge, he forgave the thugs and showed them God's forgiveness and concern--"warring" on them through love.

He visited them regularly in jail.

When one of the criminals later got out of prison, the Mennonite helped him get an education. Then he helped the former attacker to go on to college.

Love overcame evil not by destruction but by creation.

Now that is a wondrous story of redeeming love. Of course, showing forth God's unending love doesn't often end happy in this life.

Many thousands of Friends, Anabaptists, heretics, etc. and many, many other people committed to loving their enemies have died horrific deaths as did Jesus himself. From the cruel torture device of Roman 'justice,' Jesus said, "Forgive them for they know not what they do."

The Quaker Tom Fox who moved to war-torn Iraq to witness for peace and justice was kidnapped and brutally murdered by the Muslims he had come to help.

Let us live in the compassion and altruism of hope, live the "Lamb's War," to defeat violence with love.