To Us a Baby Is Given

Toward an Understanding of Childhood...

What is an infant? 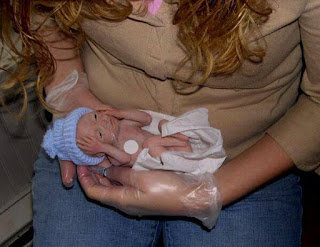 What if we didn't focus on abstract philosophical doctrine, but viewed each baby as a gift from God, just as Christmas does?

What does either doctrinal extreme have to do with the real living being who is birthed from her mother?

Human beings at birth are neither divine nor depraved. A baby is a natural offspring of a primate species. But uniquely (probably unlike any other species of life, even dolphins and chimps) a human being has the potential to grow spiritually--to relate to her Creator, and to create, bring newness and improvements into existence since she has been created in the image of God.

What a wonder a baby is! I recently held my first grandchild. Experientially, the moment was blessed. How perfect her tiny living body. What a true gift from the Divine.

But a little later, when she got hungry, wow, what lungs and what a puckered face she suddenly developed!

I must admit, I don't think something called a "soul" enters a baby at conception, or for that matter anytime later.

At conception a new life begins with amazing characteristics from the genes of her/his ancestors. At conception, the life appears to have no awareness. But brain wave activity begins early in the womb.

Even after birth, however, a baby is sort of an eating and pooping blob;-) She has awareness, but probably not much except she wants to be fed, and fed now!

Then gradually her awareness grows month after month. Finally she becomes self-conscious. Then later her sense of conscience develops.

Finally, an awareness of her finiteness and the mystery of existence comes into her consciousness.

No, a baby doesn’t come into the world a walking, talking, mentally active philosopher/theologian/moralist/saint.

On the contrary she is a living breathing consciousness at the most simple level. 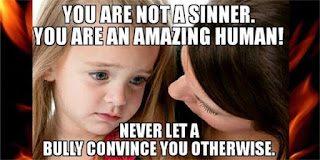 As she grows in the next 6 to 7 years in her consciousness, self-awareness, and her ethical conscience develops with a sense of ought, then she will become a moral and spiritual individual who acts. Sometimes she will fail, sometimes "miss the mark."

But even then she is still an innocent child struggling to function and to understand and to fulfill needs and desires and hopes, and the demands of the big people in her life.

Is not this the stage that Jesus referred to when he said those who enter the Kingdom of God must do so as a little child? And where he said to people to let little children come to him for of such is the Kingdom?

And this was my own personal experience—when so young. I don’t remember being a sinful-driven child that fundamentalist Christians claim all babies and small children are.

Instead, as far back as I can remember, I had very deep desires to do good, to be good, to know God and to love him. And I had a lot of childlike wonder questions about God, life, others…always asking why about everything:-)

Of course the slither of wrong thought, wrong action, wrong living does come to us all, but not yet.

A child's awareness will grow if she is introduced to God and is shown her responsibility to share, to think of others and their needs, even though she still doesn’t voluntarily give outwardly if it is to her own privation.

Finally, the ethical consciousness kicks in mid-childhood. At each given moment, there will be a tussle between her babyhood past (all spontaneous need and desire) and her adulthood future (potentially all give and bliss).

At that moment by moment juncture—that possibility moment--she must make continual ethical, spiritual decisions. She is finite and so will make mistakes and fail. She is learning in her emotions, her mind, her conscience, and her body as she moves through time. Her choices are a much more complicated version of the way she learned to walk and to talk three years earlier--by trial and error.

But now a new possibility rears its ugly or saintly head. If she doesn’t continue to develop holistically, widening outwardly her care, her helpfulness, her compassion, then she slows, stalls, or even regresses backward to a total need/want level. However, since she isn’t an infant but has the outer body and will and growing mental ability of a 6 or 7 year old, her regression hurts herself and other persons.

To try and fulfill life as a growing child, by returning to the barely conscious self-focused life of an infant actually distorts life and will bring harm to others to varying degrees.

Continued growing, in contrast, takes her through new stages of human development and new challenges. Each developmental advance brings new ethical and spiritual choices—either good or bad, advancing or regressing or a combination of both.

As anyone knows, when climbing a mountain, the higher one goes the more dangerous the climb becomes—not because the action of climbing mountains is evil, or because individuals who climb mountains are depraved sinful beings, but because the very nature of going "higher" also offers more options of choosing. Some of the ways are wrong, even could cause one to plummet to the bottom. Some of the ways are right, and lead toward the peak.

If a baby cries when she hungry that doesn’t show she is sinning.

On the contrary that is how God designed an infant, to get the attention she needs to survive. If a 4-year-old child throws a tantrum and takes her little brother’s bottle because she thinks she isn’t getting enough attention from her parents, while her action is wrong and to be corrected, it isn’t wrong yet because she hasn’t developed enough in her conscious awareness and ethical conscience to make altruistic decisions.

However, if at 8, she hides her little brother’s medicine, because she wants all the attention instead, this is wrong because by then her mental, moral conscience has developed enough to know that her action isn't the right way to get attention. And, besides, by this point she should be widening her compassion and care for others out beyond her own needs and desires.

If at 18, she steals her younger sister’s boyfriend to build up her own ego, deep wrong has occurred. By 22 if she joins with her countrymen and demonizes some other country and lies, steals, and kills the enemies, we do have actions of evil,
just as if in contrast,
she joins an outreach organization such as Habitat for Humanity or World Vision and sacrifices her time, talent, and money and inspires her younger sister to do so as well, we have actions of goodness.

Then the two sisters think of a way to get other people in their neighborhood, school, and city to get involved. One such inspired girl, about 13 years of age, raised thousands of dollars for starving, hurting people in a far off country.

See how the ethical growth of human beings happens. A human being is in process from simple surviving to becoming the acting being of ethical truth.

Now that is the beginning of Good News. Reminds me of several of Jesus’ ethical parables…

Go and do thou likewise...please stop talking about babies being guilty sinners…
Think instead of Christmas’ joy—

“Holy infant so tender and mild*,” except when she cries at 3 a.m. and the parents haven’t slept through the night for weeks;-)

Have a Blessed Christmas,

Thanks for stopping by and leaving the congrats.

Congratulations to you and your family. You'll make an excellent grandfather. I'm glad that brand new little girl will have the kindness and wisdom that you have so often shared with me.

Thanks for reading my blog and giving me encouraging words. This month here has been very stressful for too many reasons. But I am trying to remember that when we are buried in problems, we ought to remember we have been planted;-)