Albion's Seed, an Historical Analysis of the Ways of Quakers, Cavaliers, and Puritans in the New World

Interested how early Friends (such as William Penn) lived out their spiritual, social, and cultural lives in the American colonies?

How the Quakers' lived-out faith differed drastically from other British immigrants--the Cavaliers and Puritans?

Then read Hackett's profound study, a very detailed analysis of daily life based in 4 contrary worldviews which immigrated to the colonies and brought drastic changes that we affect us today. 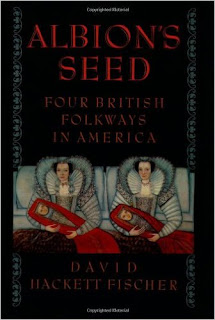 Here is a book of the kind that comes once or twice in a generation, one that is a decisive, seminal work of historical scholarship! Besides breaking new ground in interpretation, Fischer has a prose style and “voice” that is intriguing, inviting, fascinating, and positive even when dealing with the negatives of history.

Never boring, (though a few of the sociological charts made my study eyes glaze over--glad I didn't have to assemble all those minute historical details on which Hackett based his historical conclusions:-)

Did I say this book is amazing?

There are so many new views and facts of American and British history, contrary interpretations of the Christian religion, and how all of those factors play out and shape culture and society, and how these influences carry over for generations, indeed for centuries up to and including our present day.