Part #3: The Ocean of Darkness 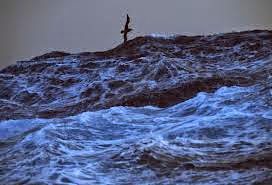 So what of George Fox’s statement, from which I got the title of my blog, "but an infinite ocean of light and love flowed over..."?

(Check back to Part 1 "Between Our Ears" and 2 "Rethinking the Title," if you missed them.)

First consider this, Fox began his famous statement by saying,
“I saw also that there was an ocean of darkness and death…”

And he probably should have added “and damnation” since so many millions of Europeans at that time were theological determinists:-(, consigning multi-millions of others to eternal damnation from before the beginning of time.

During Fox’s young adult life, millions of people died because of the horrific wars—the English Civil War and the 30 Years War. In the English War almost a million died! And in the 30 Years War at least 3-4 million. Then there were the millions wounded, those shut up in prison, the impoverished, orphans, destruction of towns and country side. The hatreds between religions then were much, much worse than now, even with 9/11 and Islamic terrorism which includes Al Qaida, HAMAS, and the Islamic State.

At one point, he became so despairing that he lay in bed for days, having lost all hope.
BUT
then, Fox experienced the first of his spiritual “openings,” from which came hope--"When all my hopes in them and in all men were gone, so that I had nothing upwardly to help me, nor could I tell what to do, then, oh, then, I heard a voice which said, There is one, even Christ Jesus, that can speak to thy condition…
[and]
“an infinite ocean of light and love, which flowed over the ocean of darkness...”

For many years, starting with a dramatic conversion experience as a young person, I also had deep faith in Christ Jesus. Then later came moments of mystical awareness of God. I thought these confirmed what Christianity taught.
Even in the worst of times, I lived in hope and shared that hope and Good News with others.

That is until last year when the encroaching darkness became overwhelming. After being a Christian for 59 years, the "ocean of darkness" drowned me--like so many others--in a theological tsunami. Last August I finally realized Christianity can’t be true. This happened primarily because of the darkness, despair, and foreordained damnation that is drowning Evangelical and creedal Christianity. But the source of all of this poison goes all the way back to Augustine of Hippo (353-430 C.E.). So the horror is only a huge return to sender, not anything new. What is new is the vast number of churches and individual Christians who are declaring Augustinianism the truth.

Since I’ve posted before about theological determinism, I’ll only give the briefest explanation: Many Christian leaders now claim that billions of us were predestined/foreordained/"passed over" to eternal damnation by God before the beginning of time. Then God willed for humans to sin and disobey him so he could damn them for his "own glory" and "good pleasure."

None of us have a choice; all infants are essentially evil at conception. And God has foreordained only a limited number of humans to be saved, but even they have no choice either.

Furthermore, God planned all the tornadoes, hurricanes, and other natural disasters which have killed hundreds of thousands of people in the last 10 years, multi-millions in the last 1,000 years, and so forth.

Even worse God planned the gassing and execution of 10 million people including 6 million Jews in the Nazi Holocaust, and God planned every rape and murder that ever happens, and worst of all, God did all this for his glory
and pleasure. :-(

Not only that but God deceives humans, has a hidden will which is contrary to his revealed will. And it gets worse.:-(

Any relationship between this “Christianity” and the Good News I heard, accepted so many years ago, and shared at revival meetings, youth camps, Bible studies, etc.
is
nonexistent! Zero!

So I battled against this ocean of darkness--the Augustinian-Aquinasian-Calvinist-Lutheran false version of Christianity--for 51 years. But finally realized that if Jesus were real and alive, he would never allow his most devout followers to devour the world with such a despairing “Gospel.”

Tragically, I finally came to wish I had never been born.

So last August, after another battle against this poison, I came to the hopeless conclusion there is no “infinite ocean of light and love.”

Such a despairing conclusion.

But at least it isn’t as horrific as the God of Calvinism. One Baptist theologian has said that such a God is indistinguishable from the devil and is a moral monster.

And John Wesley wrote he would rather be an atheist than believe in such a God.

Posted by Daniel Wilcox at 9:24 PM