LET’S DO THE TWISTER or the twisted earthquaker of plates and ridges...

“Jesus rules the wind. The tornadoes were his.” –John Piper
"Earthquakes are ultimately from God...God had good and all-wise
purposes from the heart-rending tragedy...Why would God reach down his hand and drag his fierce fingers across rural America killing at least 38 people with 90 tornadoes in 12 states…If a tornado twists at 175 miles an hour and stays on the ground like a massive lawnmower for 50 miles, God gave the command."
John Piper 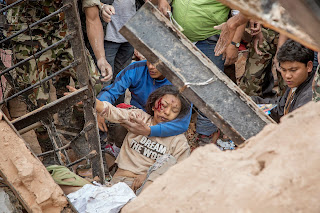 Check(er) it out:
Pastor John (not the Baptist)
Drowns us always
Like every Calvinist
With every year's shout
‘God did it’ claims on the tidal wave—
And now no doubt
To hell with damned Nepales,
God's sovereignty
(My paraphrase).

Last year or so, again
He Pipe(r)ed up from
Bethlehem Baptist Church
On the cause of 90 tornadoed twists
Which slaughtered 38—
(‘Twist and shout!”)
That tragic destruction is from Jesus!
Including the dying infant
Found in the cornfield
Not in the manger?
(Amen?)

Belt it out!
What a sick, twisted,
Piped-piper. 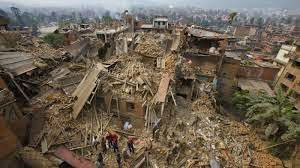 --
Bruce Gerencser, himself a former Calvinist minister, points out the utter lack of caring by so many Christian leaders:
http://brucegerencser.net/2015/04/tony-miano-rejoices-over-earthquake-in-nepal/#comment-4906

“Like many of his ilk who only care whether or not someone embraces their version of Jesus, Miano has little compassion for those who are suffering. Miana is a Calvinist, so any suffering in the world is according to God’s sovereign, unchangeable plan. No need to embrace the suffering of others. Just get them saved so they avoid the REAL suffering to come."

"As many of you know, a massive earthquake hit Nepal, killing thousands and injuring thousands more. A compassionate, kind, loving human would attempt to empathize with the Nepalese and their horrific loss of life and home. Not Miano. Here’s what he had to say on Twitter:

"Most of the retweets were from people who condemned Miano’s tweet, but 96 people thought that tweet was wonderful. Some of those who clicked favorite were the same who condemned Miano’s tweet, but there were some Christians who thought Miano’s tweet reflected their view. People like Jessica Lam, Seth Dunn, and Kevin McDonald, and a host of other Christians who don’t want others to know their name. Like the raised hand and the unspoken prayer request, these Christians want Brother Miano to know that they support and approve of his tweet about Nepal."

"Miano is followed by thousands of like-minded churches, parachurch ministries, and Christians. I looked in vain for one tweet that rebuked Miano. I wonder how they would respond if I tweeted this after a natural disaster leveled their home and church and killed their children:

"Ha! Ha! Ha! You Christians in Toledo,Ohio got exactly what you deserved. Repent of your stupid beliefs. I hope that none of your churches are rebuilt!" #mygodrulz 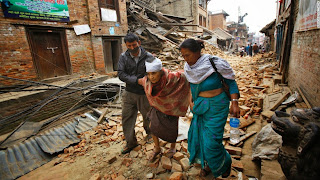 "I can only imagine how Christians would respond to me, and rightly so. Why are Christians silent when people like Tony Miano, Franklin Graham, Pat Robertson, James Dobson, Ray Comfort, John Piper, Al Mohler, and a host of other miscreants, use the suffering and loss of others to remind them of their need to repent and believe in Jesus?”

And my response to Bruce's important article:

Bruce, you ask rhetorically, “Why are Christians silent when people like Tony Miano…John Piper, Al Mohler, and a host of other miscreants, use the suffering and loss of others to remind them of their need to repent and believe in Jesus?”

I’ll answer, based on my life-long experience and studying of the HUGE resurgence of Calvinistic theology into the local church.

It’s because millions upon millions of Christians, (like Muslims) don’t question what their leaders tell them…
that God has planned all evil events (like some passages in the Hebrew Bible claim and that most Christian leaders past and present emphasize).

Miano’s tweet is mild compared to the ethical and theological obscenities stated by John Piper and others over the tornadoes several years ago, devastating hurricanes, and the terrible tsunami in Asia.

I’m sure you remember Piper’s infamous sermon on the tornadoes in the Midwest:
“Why would God reach down his hand and drag his fierce fingers across rural America killing at least 38 people with 90 tornadoes in 12 states…If a tornado twists at 175 miles an hour and stays on the ground like a massive lawnmower for 50 miles, God gave the command.

Where are the compassionate, the empathetic, the kind, the caring when we humans so need them?

World Vision International is one place to start.
http://www.worldvision.org/news-stories-videos/nepal-earthquake

In the Light which opposes all harm, suffering, and wrong,