Combatants for Peace--Sharing the Pain, Building the Hope 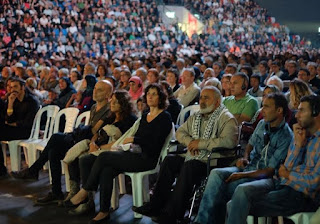 "Some 3,000 Israelis and Arabs, including hundreds from the West Bank, participated in the Israeli-Palestinian Remembrance Day ceremony – held for the 11th consecutive year – at the Shlomo Group Arena in the Tel Aviv Fairgrounds." 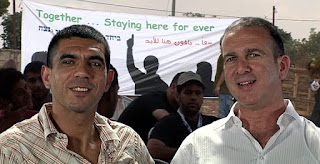 "The ceremony on Tuesday was organized by Combatants for Peace Movement in cooperation with the Parents’ Circle- Families Forum."

"The ceremony included speeches by bereaved family members who are active in forums promoting dialogue, reconciliation and nonviolence.

There were also performances and speeches by notable artists including Ohad Naharin, the artistic director and choreographer of the Batsheva Dance Company; Sha’anan Streett, the lead vocalist of Hadag Nahash; and the Arab-Jewish women’s choir Rana. MKs Zehava Gal- On and Esawi Frej of Meretz, and Dov Henin from the Joint List, were in attendance.

The ceremony first took place 11 years ago as an initiative of Buma Inbar, who lost his son Jotam in 1995 while serving with the Golani Brigade in Lebanon. Since then has it provided an alternative for bereaved families to the official ceremonies. 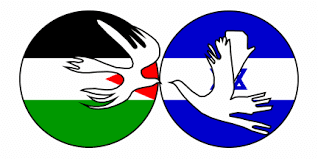 In a meeting before the ceremony, Combatants for Peace activist and co-founder Suliman Khatib said the movement is facing challenges at home.

“The main opponents we have in the Palestinian society are the anti-normalization’ advocates,” he said.

“There will always be people who would prefer to stay in the comfort zone and stick with old habits.” Khatib referred to the inauguration of the Nelson Mandela Square in Ramallah last month, and stressed that “his way is the way of movement – combating without violence.”

Dozens protested outside the ceremony, shouting, “There is no such thing as a Palestinian people,” and, “Traitors,” at the participants exiting the building. Nir, one of the protesters, told The Jerusalem Post he thinks that having such ceremony is unacceptable.

“I am shocked,” he sad. “I can’t believe that on the day that we mourn our soldiers, some of us find it right to mourn the loss of Palestinians.”

http://www.jpost.com/Arab-Israeli-Conflict/Israelis-Palestinians-participate-in-joint-Remembrance-Day-ceremony-in-Tel-Aviv-453672
--
from Wikepedia:
"Combatants for Peace (Hebrew: לוחמים לשלום‎; Arabic: مقاتلون من أجل آلسلام‎) is a bi-national movement of Israelis and Palestinians who lead a non-violent struggle against the occupation, and support a peaceful solution of two states for the two peoples: Israeli and Palestinian.

The movement was formed in 2005 by Palestinians and Israelis who had taken an active role in the cycle of violence, and decided to drop their arms and work together to promote a peaceful solution through dialogue and non-violent action.

Originally, the activists on both sides were solely ex-combatants: the Israelis as soldiers in the Israeli army and the Palestinians as participants in the violent struggle for Palestinian freedom. 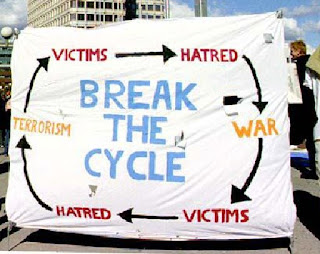 Today, members of the movement include also men and women who have never taken an active role in the violent struggle in the area. They received the prestigious Courage of Conscience Award from the Peace Abbey in 2009.

The goals of the organization are:
To raise the consciousness in both publics regarding the hopes and suffering of the other side, and to create partners in dialogue.
To educate towards reconciliation and non-violent struggle in both societies.

To create political pressure on both governments to stop the cycle of violence, end the occupation and resume a constructive dialog.

In view of these goals, the movement operates in the following ways:
Holding ex-combatants' meetings, allowing each side to understand the other's narrative.

Direct actions and protests against the policy of occupation and its outcomes such as road blockings, house demolitions, limitations on Palestinian farmers and confiscation of land by Israeli settlers.

Organizing joint daytrips and educational tours of Israelis to the West Bank.
Solidarity actions such as joint olive harvests and agricultural work, to help Palestinian farmers who have difficulties in working their lands near army posts and Jewish settlements.

Producing special events such as the joint Memorial Day ceremony for victims of the conflict on both sides: Palestinian and Israeli. 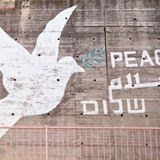 Combatants for Peace has organized a series of meetings between veterans from both sides, most taking place in East Jerusalem in the early years, but have expanded now into three local groups operating between Tulkarm-Tel Aviv, Beersheva-Hebron and Ramallah-Jerusalem.


Live in forgiveness, reconciliation, justice, and peace in the LIGHT,