The Lowest of the Low--Denial of the Reality of Ethics


It would seem that Divine Command Theory of conservative Christianity which claims that an action is only wrong or right if God declares it so is the worst form of ethics.

How much lower can one get than to proclaim that ethnic cleansing, the slaughter and rape of enemies, the abuse and torture of others, the enslavement of humans is good or justified because the Almighty says so?

For a long time, it appeared that DCT was the worst of the worst.

Thankfully most secular human leaders (in the U.S. at least)—regardless of their particular worldview--emphasized human rights, justice, equality, fairness, generosity, tolerance, the Bill of Rights including free speech, freedom to change and criticize religions and ideologies, etc. (to one degree or another).
BUT all that has changed.

Now many secular leaders are claiming there are no human rights, no objective ethics, that all ethics, even opposition to rape and enslavement are only "subjective" constructs"!

When did the abhorrent tilt to relativism come about?

(It’s enough to scare the living daylights out of any human rights worker, any Civil Rights leader, any one involved in law enforcement, any normal citizen who is concerned with real ethics.)

Look at this strange exchange this week on the Internet:

Atheist blogger Neil Carter wrote, "our moral systems of guidance are no more objective than the compass Jack Sparrow carries around with him on his many misadventures.2 And that furthermore, that is perfectly okay."
-- 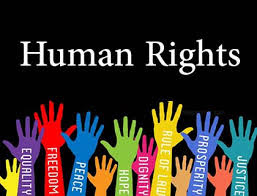 For instance, the Humanist Manifesto III states, (like the Enlightenment, and human right organizations now such as Amnesty International) that "We are committed to treating each person as having inherent worth and dignity, and to making informed choices in a context of freedom consonant with responsibility.”

Note emphasis in the Manifesto on words such as
"Inherent worth"
"freedom"
"responsibility".

On the contrary, ethics are discovered, are "inherent" in reality.
--

Neil Carter also wrote, "...humanists of every stripe can agree that human beings should never be treated as someone else’s property."
--

Note the danger of Carter's words:
"can agree"

But agreement has nothing to do with whether some action is good or bad!

And true ethics aren't based in any "can."

They are always "ought."

Besides, various humanists have justified not only enslavement, but the slaughter of civilians, torture, inequality,
and even claimed that infants aren’t “persons”!

And that, therefore, an infant, since it isn't a "person," it may be killed up to one year old!!

And that some animals have more value than some human infants!

Tragic. How confused and downright wrong such thinking is.

Even if humans changed their minds and declared various immoral actions no longer immoral and okay, they wouldn't be moral.

This sort of relativistic thinking is the extreme danger of nonobjective ethics.
Lots of humans in the past and now declare terrible actions good.

That has nothing to do with whether or not they really are good.
--

An Atheist:
“That we find near universal agreement about moral statements does not in any way refute their subjectivity.”
--

An Atheist:
“They most certainly are. Ethics are abstractions that comprise many different factors. How we were raised, natural empathy, selfish desires, how importantly we value fairness, thoughtful consideration... all of these and more are used to develop what we would call "ethics."
--

2nd Atheist:
The legal definition of rape has changed during my lifetime. It wasn't until 1993 that marital rape was made illegal in all 50 states. So before then was marital rape moral or immoral?"
--

3rd Atheist:
"What any given culture puts into the bucket of "wrong" is inherently relativistic."
--

As you have been told here for years by many people much smarter than me:
There is no such thing as "objective ethics" or "objective morality". There is only ethics that most of us like or accept as part of our current social structure, just like every other society that exists or has existed."

"Have you stumbled upon a set of ethical observations equivalent to Newton's laws of motion, or the laws of thermodynamics in physics? Then your objective morality doesn't exist, and you should really stop embarrassing yourself by insisting it does simply because you're frightened of the idea of it not existing.

You like the ideals espoused in the Humanist Manifesto? That's nice. But don't pretend this is somehow an objective document. The fact that you (and most other people) might like the ideas within it does not make it objective."
--

5th Atheist:
"If you could devise an objective moral framework, i.e. one that objectively answers all moral questions under any circumstances, then you could have objective morals, on equal footing with mathematical truths. Of course, nobody has ever succeeded in creating such a framework.

Atheist Blogger Neil Carter:
"My point is that all morals systems are constructs, even the ones we can agree on. And I'm pretty sure all humanists will agree that rape is bad."
--

H. R. Daniel Wilcox:
Whether humanists "agree" that they are subjectively against rape, has nothing to do with whether or not rape is really wrong.

Consider that the vast majority of orthodox Muslims believe in inequality for women, and think that ex-Muslims ought to be punished.

Those humans are objectively wrong, are immoral in their beliefs and actions.

Most Americans think that if the U.S. government tortures and slaughters civilians that is justified.

But that doesn't make it okay.

Many American Christians think that human rights ought to be denied same sexual couples!

But that doesn't make it okay.

Amnesty International has worked for human rights for many years. AI thinks every human has human rights. That human rights are real,
not "subjective" "likes."

Human rights aren’t “constructs” but are inherent in reality. Every human is born with rights which are “inherent” and “unalienable.”

No way are ethics "subjective" and made up by humans.

Even if every human on the face of the earth said that in some cases slavery, rape, slaughter, racism are okay, those actions still wouldn't be moral.
--

6th Atheist:
"Rape is bad" is not actually a moral statement without defining what "rape" means. And when it comes to the definition of rape there is no consensus, not even among humanists. Does rape require penetration, or could it include other sexual acts? Can it be rape if the perpetrator was convinced that it was consensual?

Can it be rape if there was no violence involved? Does rape within marriage require stronger evidence? Can the behavior of the victim be a mitigating factor? Etcetera.

Look at the central statement again by the 4th Atheist:
“As you have been told here for years by many people much smarter than me:
There is no such thing as "objective ethics" or "objective morality". There is only ethics that most of us like or accept as part of our current social structure, just like every other society that exists or has existed.

Have you stumbled upon a set of ethical observations equivalent to Newton's laws of motion, or the laws of thermodynamics in physics? Then your objective morality doesn't exist, and you should really stop embarrassing yourself by insisting it does simply because you're frightened of the idea of it not existing.

You like the ideals espoused in the Humanist Manifesto? That's nice. But don't pretend this is somehow an objective document. The fact that you (and most other people) might like the ideas within it does not make it objective.”
--

And this is the view of many modern thinkers at present. Consider the views of the Israeli historian Yuval Noah Harari in his famous book, Sapiens: A Brief History of Humankind.

He states that "equality," "liberty," and human rights are "myths."

When did so many modern thinkers turn against the Enlightenment, and start claiming that ethics are “relative,” “subjective,” only human “constructs,” and rejecting the view that human rights are “inherent” and “unalienable”?

When did such humans begin to think that even rape and slavery are only subjective preferences or “dislikes” or “likes,” not really inherently evil actions?!