The TRAGEDY OF HOPE


Remember this heart-warming news photo of a Black boy named Devonte hugging and being hugged by an Oregon police officer during these troubling, divisive, demeaning times? 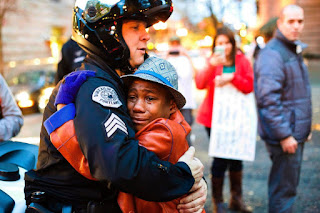 In the midst of tragedy and loss and despair, came contrary acts and words of loving hope.

His adoptive parent Jennifer Hart:
“We are all ripples. There is no such thing as a small act of kindness. What may be small or simple to you, might mean the world to someone else. In some cases, these simple acts of touch the lives of countless people, often times in ways we can never fully grasp. Our family is still riding waves of the aftermath of Devonte’s hug.”

Jennifer: “My son has a heart of gold, compassion beyond anything I’ve ever experienced, yet struggles with living fearlessly when it comes to the police. … He wonders if someday when he no longer wears a `Free Hugs’ sign around his neck, when he’s a full-grown black male, if his life will be in danger for simply being.”

ONLY ONE MONTH AGO, Jennifer wrote: And “9 years ago, the adoption of these three humans was finalized. ‘Finalized’ the terminology seems so unfitting for the situation. It was just the beginning. A new beginning of an expansion of my(our) understanding of love. I am a better human in every possible way for knowing these children. They have been my greatest teachers. Contrary to the common notion that we can’t choose our family, we absolutely can. We choose by loving – and that’s worth celebrating every damn day.”

Friends called Jen and Sarah “Hart Attacks” because of how loving they were. 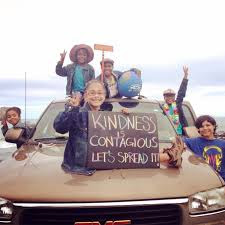 YET 2 WEEKS AGO, IT APPEARS THAT JENNIFER INTENTIONALLY MURDERED HER ADOPTED SON DEVONTE, HER SPOUSE OF 18 YEARS, AND THEIR OTHER 5 TEENS!

The horrific tragedy of hope.

How could this possibly have occurred?

Could all of the “HOPE,” social activism, and funny photos by Jennifer and Sarah have all have been a sham, covering a ruthless sociopathology?

Could all of the seeming joy, hope, and fun for these formerly abused, neglected kids have been real, but because the kids often acted out and misbehaved, (how abused children often do) then Jennifer lashed out, abused?
I used to be a child care worker at a hospital for emotionally disturbed children, and taught at-risk teens for many years.
It take a HUGE amount of time, and unending patience to help children and teens from dysfunctional, drug-infested, abusive backgrounds.

MAYBE the documented cases of abuse by the Hartss--of hard spanking, food withdrawal, etc. were done by Jennifer (and maybe Sarah) because they—like most dysfunctional parents, despite their care for their kids--didn’t have the patience, fortitude, and professional distance to deal with 6 misbehaving kids and teens!
Heck, I remember medical staff at the children's mental hospital who sometimes “LOST IT,” (not hitting, but definitely angrily losing their temper and using the isolation room as punishment, rather than hopeful help).

BUT that still wouldn't explain why Hart decided to murder the kids she claimed to love. Also, why did she and Sarah keep them away from others, except when they attended public gatherings? This sounds like cultish control, not genuine caring.

Or there's the bizarre, highly unlikely but possible, claims of a conservative Christian commentator that the two parents were very dysfunctional “liberals” who took their anger over Hillary’s loss to Donald Trump out on their kids (who they had USED as social props)!?:-(

What a Gross political demeaning charge! 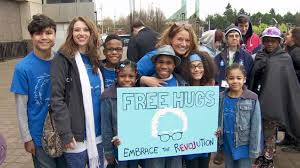 Regardless, of Jennifer Hart’s horrific actions, especially murdering her kids and her spouse, and her unknown motivations--
the Hart Family is a glaring example of the tragedy of hope at present, where the supposed "Good News" of Christianity in the U.S. is centered on selfishness, inequality, injustice, threats of war attacks, verbal put-downs and demeaning speech, immoral actions...all in the name of Christ, of God. And many of these conservative Christian leaders also claim that God has foreordained most of the billions of humans to eternal torture for their God's glory!