“God and King,” “The Sun Never Sets on the British Empire,” “Gott mi tuns” (on every German soldier' belt buckle-“God with us”)
“Holy Mother Russia,”
"the Fatherland,”

“Change We Can Believe In” 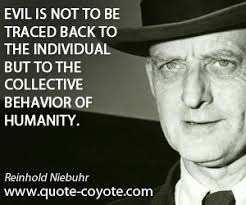 And endless subgroups of religion, politics, and ideology

Republican vs. Democrat
Capitalist vs. Marxist
Christian vs. Muslim
Hindu vs. Buddhist....

Notice, they all tend toward egocentric identities!
&
Power, Money, War, and In-Groupness.

According to the American theologian and social critic, Reinhold Niebuhr, all of us humans
have the tendency individually to behave less moral than each of us ought to do.

But more importantly, the central key focus and thesis of his book, Moral Man and Immoral Society
is
that generally every nation-society of humans will act even more immoral than individuals within each nation.
(He later wrote that his book ought to have been, 'immoral men, and even more immoral nations'.)

This tragedy happens because of of all human nations have group-egos.

History does seem to show that any given human society will tend to be more immoral and more unjust than some of its citizens.
The analogy would be like a bit of dye dropped into a glass of water. It quickly stains-discolors the whole glass of water even if only a very tiny bit of dye has been added.

Possibly, a nation could be morally better than its individual citizens, but it’s not likely. And it hasn’t happened in known history.

Here are a few more examples of the tendency toward ethnocentrism in history:
“Nobiscum Deus in Latin, Μεθ᾽ἡμων ὁ Θεός (Meth himon o theos) in Greek, was a battle cry of the late Roman Empire and of the Eastern Roman Empire. It is also a popular hymn of the Eastern Orthodox Church, sung during the service of Great Compline (Μεγα Αποδειπνον). The Church Slavonic translation is Съ Hами Богъ (S Nami Bog).”

“It was used for the first time in Germany by the Teutonic Order. In the 17th century, the phrase Gott mit uns was used as a 'field word', a means of recognition akin to a password,[2] by the army of Gustavus Adolphus at the battles of Breitenfeld (1631), Lützen (1632) and Wittstock (1636) in the Thirty Years' War."

“In 1701, Frederick I of Prussia changed his coat of arms as Prince-Elector of Brandenburg. The electoral scepter had its own shield under the electoral cap. Below, the motto Gott mit uns appeared on the pedestal.”
--Wikipedia

It is shocking that in the 21st century, many nations are now turning back to autocratic, egocentric forms of governments.

Nationalism like what caused the cataclysm of the Great War at the beginning of the 20th century is back!

Let us work to counter this dire change for the worse.

I see a way of being wherein people are guided and informed in their relationships and interactions entirely by the inshining motion and movement of inherent consciousness itself in itself and are come out of the very process of identification with and participation in reflective thought to guide their relationships. This different way sees past and over the natural affections of outward constructs of reflective thought guide people; of which, both nationalism and globalism mirrored refractions.

Thanks for stopping by and sharing.