Probably many people will find my article objecting to the removal of signatures and images (after 1906) at El Morro Rock National Monument a rather picky criticism over a minor change by the U.S. Government.

(Notice in the following photo where squares of rock have been smoothed, post-1906 signatures or images removed.) 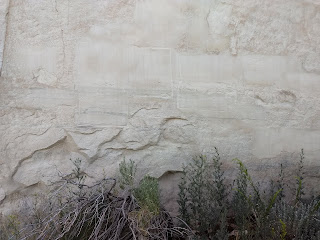 And, besides, don't nearly all of us object to the defacing of homes and businesses by gang graffiti?!

Is there any difference between (possible examples) some young cowboy's branding image in 1911 or the signature by a Great War soldier in 1918 or the scrawled name by a young teen when his folks stopped here on their southwestern vacation in 1921
VERSUS
the signatures of a famous Spanish conquistador such as Don Juan de Ornate in 1605, or Western Explorers, or U.S. soldiers including a future Confederate leader, Breckenridge, or by Sarah Fox, a Wagon Train 12-year-old girl in 1858?

Well, yes and no.

I suppose given the nature of human beings, our sense of ethics, order, art and history and public knowledge that governments often need to make somewhat arbitrary judgments when it comes to its public places.

There are reasons given, some of them valid, some invalid, some inconsequential. For instance, consider the legality and illegality on a different topic. In the 1970's, the U.S. Government suddenly instituted the 55 mile an hour speed limit on the nation's highways. This occurred and remained in effect for over 20 years. Various reasons were given for the ruling including as a way of dealing with the 70's oil price hikes of Middle Eastern Nations and as a way to reduce auto accidents, in other words a way of safety.

Yet the federal law was repealed by Congress in 1995. Now on my recent trips, I regularly not only encountered speed allowances of 75 on major Interstates, there were also ones of even 80 miles per hour in Nevada and Utah, and 75 on narrow county roads in Texas! Etc.

Indeed, the nuances and bases of legality versus illegality vary from time to time depending on which facts are valued the most. And the rules of governments don't necessarily reflect moral truth or even good sense.

But one objection to graffiti is that it is crass, intrusive, and defacing.

etymology: "1851, "ancient wall inscriptions found in the ruins of Pompeii," from Italian graffiti, plural of graffito "a scribbling," a diminutive formation from graffio "a scratch or scribble," from graffiare "to scribble," ultimately from Greek graphein "to scratch, draw, write" (see -graphy). They are found in many ancient places, but the habit was especially popular among the Romans. Sense extended 1877 to recently made crude drawings and scribbling in public places."
https://www.etymonline.com/word/graffiti

However, as the etymology of the very word states, this sort of human activity has been going on for thousands of years. Indeed, archaeologists have discovered Roman soldiers' graffiti in Jerusalem from the time of Jesus and saved it, protected as worthy for public history!

And, it's not like that Onate's markings, those of the a Spanish conquistador and Governor of New Mexico, were significantly different than those of ancient Roman soldiers or even of modern at-risk youths carving their names or images or group identities into public places.

Notice in his signature that Onate carved right over an ancient Native American petrogyph!

Yet he could have signed his name anywhere on thousands of acres of blank massive rock.
Why did he deface the historical Native American's image?

Most likely because he didn't think that Native American images were important. As a Spanish leader he would have thought that Native Americans themselves were insignificant. He might have even done it intentionally to establish his territorial claim, like a male cat leaving his mark.

After all, Onate was an invader. And he brought a thousand Mexicans to settle this confiscated land that actually belonged to the Pueblo Native Americans and had for centuries before he and other Spaniards had conquered it. 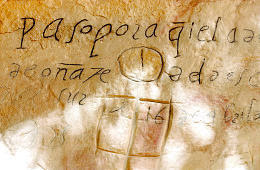 
What of some of the other actual signatures, unlike Onate's that didn't ride herd over ancient art?

Are they in their own way worthy to be considered art, more than mere doodling?

Yes, some of the inscriptions at El Morro Rock are very elegant and beautiful such as E. Pen Long's, true works of art. 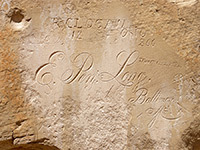 But other old markings at El Morro are unclear, even some may have been idle scratches or hastily marked territory claims no different than disdained modern graffiti.
I still remember one day after a day of teaching students, discovering WP carved into one of my classroom's wood book cases in Santa Maria, California. I was not a happy educator at the time, though even then, I realized the seeming innate need of human beings to leave their mark.

Here is a nuanced view of a professor of anthropology:
Should the National Parks repeal its prohibition of new inscriptions?

"Doing so might revive a more vibrant, living kind of history at the monument, a history in which we participate as active agents, an open-ended history that is not yet finished or determined. Visitors might even glean a more authentic understanding of the experiences of those who passed by this very same place long ago.(28)

"And who is to say that the name of someone who died 300 years ago is more important than my name, or my child's?

"Allowing new inscriptions would certainly result in the loss of older ones (the monument receives 35,000 visitors a year), but such loss happened in the past, is inevitable in the future, and could be mitigated through documentation.

"So what policies and practices would I recommend instead? First of all, I am not suggesting that the park service repeal its prohibition of new inscriptions.
"Still, the prohibition makes sense to me, and I am glad that we can still see all those engravings from the past. Not only are the inscriptions interesting, they can teach us something about people who came before us and the history of the Southwest.

"Happily, the park service has provided two boulders outside of the visitor center and a sign that reads, "Carve your initials on this typical piece of local sandstone, if you must—but please remember: it is against the law to carve anything on Inscription Rock itself!"(29) Visitors can also "inscribe" their names in the monument's registry.”
from History, Preservation, and Power at El Morro National Monument: Toward a Self-Reflexive Interpretive Practice
by Thomas H. Guthrie, Assistant Professor of Anthropology at Guilford College in Greensboro, North Carolina.
https://www.nps.gov/crmjournal/winter2010/article2.html
--

I didn't see the 2 boulders at the visitor center where anyone can inscribe their names.
But if that is still true, it is an excellent example of what the Park Service ought to do, ought to keep doing.

Providing an alternative for present day inscribing, as the professor Guthrie emphasizes, is not only a positive alternative to the negative of prohibition of Federal law, it creates new history for future visitors.

Consider how, especially, teens might not be enthralled most history, by some long-ago Spanish conquistador called Onate, but they might find identity with a teen from their own city who had carved his or her name 50 years before in 2019!

We live briefly in this stream of conscious history, then we die. Hopefully, we can leave behind memorable actions and creations.

But how important are even mere scratchings of the least important human being.

Posted by Daniel Wilcox at 6:54 AM