I've been on a long philosophical journey for about 68 years, so it could take many pages:-), but I will try and give you the dehydrated, non-fat version:
BACKGROUND
1. I appear to have been born with a 'why' caught in my throat, unlike my family or anyone else in a Nebraska village; always asking 'why' beginning at about 4, driving my parents tired.

2. Early on beginning about 10, I felt a deep keen moral concern. So I was troubled by the ethical horrors and inconsistencies in our Baptist Christian religion such as when our Sunday school teacher claimed that God had sent bears to maul kids making fun of the prophet Elisha. I countered God would never do such an evil action. 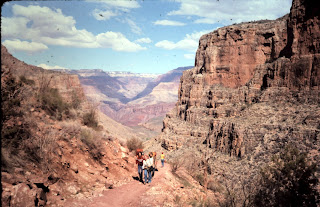 3. I presume that you are interested, mainly, in my philosophical journey so I won't share my own personal experiences related to that.

4. As Baptists, we weren't creedal; we strongly opposed Augustine, infant sin, Original Sin, and his other horrific beliefs and dogmas.
BUT then I discovered that most Christian churches did believe those dogmas. As a teen, I read a book from the library on the Creeds and was flabbergasted that anyone would believe such convoluted superstition.

5. As a thinking teen and through my adult years, I never believed Jesus was God, so over the years I've learned that most Christians leaders think I was never a Christian, not even when I was a Baptist youth minister, Bible teacher, later an elder, missions volunteer, etc.

6. At 18-20 I went to the University of Nebraska and Long Beach State, where most of our professors were agnostics, declared atheists or Marxist, almost no Christians. We formally studied philosophy and culture anthropology, philosophy, comparative literature. The ex-moderate fundamentalist encounters the secular world; from no-movies-or-dances religion to hanging out with philosophical beatniks and early hippies. Then I moved to Haight-Ashbury:-)

7. My adult life has been one life long search for what is true.

10 PHILOSOPHICAL VIEWS OF REALITY with my own views at the end:
These are the views of reality that I understand from the views of reality that I've read about from many well-known cosmologists, philosophers, biologists, etc.
Keep in mind that I do think ethics are what define intelligent, self-aware, ethical species. It's my view that all rational, aware, ethical species would oppose dishonesty, rape, slaughter, inequality, etc. and support meticulous honesty, compassion, altruism, bio-concern, etc.

Ethical realities aren't just labels that we place on behavior.
--
We are living in a universe about 27 billion light-years across, and about 13.7 billion years old. According to cosmologists, the cosmos will last many more billions of years.

What is the inherent or ultimate meaning of this cosmos?

Some human leaders claim it's meaningless, others that they know for sure its exact nature.

#1 All reality came about by cosmic chance. Seemingly the view of the French biologist Jacques Monod in Chance and Necessity, a powerful book I read a few years back, and the view of the evolutionary biologist Stephen Jay Gould.
My take on this as an average person: I think this view is possible. I guess given cosmic time even the "laws" of nature, math, reason, life, ethics, consciousness could all blip into existence.

#2 All reality came about by cosmic determinism of meaningless matter and energy which is eternal. Everything is lock step. There are no choices, not for what I supposedly ruminate on having for lunch or whether or not to commit murder or what to choose for my career. Or even whether to read about various views and to post this.

Based on our studying this at university, and for many years since, and many times trying to imagine my "I" as an illusion who is only 'done to' by the cosmos, I think this is one of the least likely views of reality. But the view is very popular these days--sort of an atheistic version of Calvinism/Augustinianism.

#3 All reality came about somehow by a temporary, finite, imperfect, even distorted, expression of the perfect eternal Ideal Forms of Platonism.

I find it intriguing that a minority of thinkers who identify as atheists do think that the Good exists! They are also moral realists.

This view seems to posit an eternal physical reality with no "super" reality 'transcending' it.

#5 All reality came about by an impersonal ultimate reality of cosmic beauty. Scientists such as Albert Einstein stated this was his view, that he thought the impersonal god of Spinoza was true. But this seems similar to a combination of #3 and #4.

However, unlike #2 and #4, the emergent-possibility cosmos isn't meaningless and purposeless, but is filled with meaning.
Interesting, but I doubt it.

#6 All reality is coming about by the everlasting but limited cosmic reality that is becoming. Essential reality is Process influencing matter and energy. This is the view of thinkers such as philosopher and mathematician Alfred Lord Whitehead, philosopher Charles Hartshorne, etc.

This cosmic but limited ultimate reality--God--who is far beyond human understanding works toward changing matter and energy and conscious life such as homo sapiens into increasing patterns and forms of beauty, meaning, and purpose. This is also the view of some Reform Jews.

But where is the evidence for this?
Process thinkers explain that consciousness, reason, ethics, mathematics, natural law, creativity, aesthetics, life itself, etc. are the evidence.

This view is appealing, but most of the technical philosophical explanations are BEYOND me. I'm a relatively average literature teacher (who got born with a "why" in his throat;-)

#8 All reality came about by the impersonal Brahma God of Hinduism and some modern New Age leaders such as Ken Wilber with his Integral Theory, and Deepak Chopra, etc. .

The impersonal God Brahma is conducting a cosmic dance in which it forgets its self and dreams into billions of separated forms including in one minor edge of the universes, thinking humans.

Given that I am a human rights worker from way back, for about 55 years, obviously this isn't my cup of philosophical coffee. Also, I still vividly remember as a Gandhi devotee being shocked when a Hindu priest in L.A. tried to persuade me to go to Vietnam to kill (when I was drafted), saying insects are killed all the time in reality.:-(

#9 All reality came about by unknowable factors. Everything beyond and before the Big Bang is such a complete unfathomable mystery that it will probably not ever be solved by finite humans at least not for a very long time.
Allegedly the view of the Mysterians such as Gardner, Penrose, etc.

#10 All reality continually comes about by infinite impersonal reality which never had a beginning. No creator god exists. Some forms of Buddhism (though other forms are theistic).
--
At this point in my life, I lean toward some view of #3 and #6, though I am open to #1 as a real possibility.

However, maybe, as some famous scientists have emphasized, we finite human primates don't have enough knowledge to even decide this question.

I certainly don't know even how to do calculations to send a rocket into space, let alone know the nature of reality in its astrophysical/cosmological ultimate sense.

However, each moment I exist, I am face with learning, making choices, etc, so by the very nature of being a human primate, I have to live out of one life stance. Even though I have no conclusive "proof," as I've said, ethical truths are a good start.


In the Light,
Dan Wilcox

Posted by Daniel Wilcox at 7:49 AM