Words of Hope and Moral Choice even in the worst evil


In Every Crisis
when flailed, blind-sided,
going down fast in
a basket abyss shrivel of worth-loss
and hope fails all drowned,
do we launch deeper into the deep?

do we weep,
do we shrive?
thrive?

for in every crisis
chry-sal-is*


*From crawler to butterfly--chrysalis
Even in the worst, most evil events, each of us still has the difficult possibility of heeding Viktor Frankl’s shocking words about their horrific experiences in Auschwitz Concentration Camp: 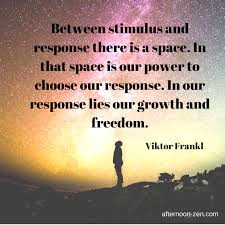 “Between stimulus [even trying to survive at Auschwitz!] and response there is a space. In that space is our power to choose our response.
In our response lies our growth and our freedom.”
“As we see it, an analogous relationship between the realm of human freedom and a realm superior to man is quite imaginable,
so that man is endowed with free will...”
Viktor E. Frankl, survivor of Auschwitz Concentration Camp. However, his wife died in Bergen Belsen.

“(26 March 1905 – 2 September 1997 was an Austrian neurologist and psychiatrist, and a Holocaust survivor, of Theresienstadt, Auschwitz, Kaufering and Türkheim. Frankl was the founder of logotherapy (literally "healing through meaning") a meaning-centered school of psychotherapy…part of existential and humanistic psychology theories. He is the author of over 39 books; he is most noted for his best-selling book Man's Search for Meaning based on his experiences in various Nazi concentration camps...
"In 1941 he married his first wife Tilly Grosser, who was a station nurse at the Rothschild hospital. Soon after they were married, she became pregnant but they were forced to abort the child. Tilly died in the Bergen Belsen concentration camp. His father Gabriel died in the Terezin concentration camp (Theresienstadt) in 1942. His mother and brother, Walter, were both killed in Auschwitz."
from Wikipedia

In the Light of Moral Realism,

Dan Wilcox
Posted by Daniel Wilcox at 11:06 AM