Hanging a Woman Because She Spoke Against Islam

Islam is very confusing to me though I'm reading through the Qur'an in translation a second time, have lived in Palestine/Israel for seven months, have dialogged with Muslims for many years...

Consider the contradiction between the following noteworthy, positive witness against the ISLAMIC STATE by many Islamic scholars which ends: "In conclusion, God has described Himself as the ‘Most Merciful of the merciful’. He
created man from His mercy. God
says in the Qur'an: ‘The Compassionate One has taught the
Qur'an. God forgives all sins. Truly He is the Forgiving, the Merciful.”’ (Al-Zumar, 39:53).And God knows best.
24th Dhul-Qi’da 1435 AH / 19th September 2014 CE"

CONTRASTED TO THIS WEEK'S NEWS: 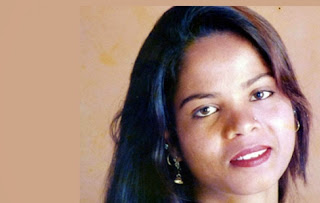 A Pakistani Christian woman has been sentenced to hang after she was accused of making 'blasphemous' comments about the prophet Mohammed during an argument.

While working as a berry picker in 2009, 46-year-old Asia Bibi got into a dispute with a group of Muslim women who objected to her drinking their water because as a Christian she was considered 'unclean'.

Hours after the incident one of the women reported mother-of-five Ms Bibi to a local cleric, claiming she had made disparaging remarks about the prophet Mohammed during the row.

As a result of the allegations, a furious mob arrived at Ms Bibi's home and savagely beat her and members of her family.
She was later arrested, charged with blasphemy and eventually sentenced to death - with her entire family forced to go into hiding after receiving threats on their lives.

This week, despite international outrage and hundreds of thousands of people signing a petition for her release, Ms Bibi lost an appeal to have her sentence overturned, meaning she now faces death by hanging.

Human Rights Watch described the court's decision as a "disgrace to Pakistan's judiciary."
"Asia Bibi's case is an example of how Pakistan's vaguely worded blasphemy law has led to discrimination, persecution and murder since its imposition almost three decades ago," spokesman Phelim Kine told CNN.

Bibi's attorney, Naeem Shakir, told CNN on Monday that he would file an appeal once he had received a detailed copy of the judgment.
"I have a very strong case, I am sure the Supreme Court will provide us with relief. There is no concrete evidence against Asia Bibi, and the courts are only relying on the statement on those two women," Shakir said.
Posted by Daniel Wilcox at 11:02 AM