The Ugly History of Father Serra: Founder of California Missions

As usual, history is very different from—and stranger than--what most people,
based on popular understanding, assume. What an informative, tragic contrast
to the glowing presentations of California Missions in schools,
at the California Missions themselves, and the general public knowledge. 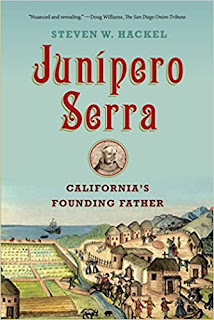 #1 The most shocking discovery in the reading is that Father Serra, brilliant achiever (from an island off the coast of Spain), priest, professor, missionary, was an agent of Inquisition in Mexico! Very troubling.

I thought that the Franciscans, started by St. Francis, didn’t do such horrid stuff.

#2 Tragically, one discovers in this thorough biography that the Franciscans (and the Jesuits, etc.) were guilty of plenty of abuse, intolerance, and injustice.

Serra and other monks punished, whipped, and kidnapped-back natives who ran away from the Missions:-(

They sent out Spanish soldiers to capture "fugitive" natives and bring them back to the Missions to be physically punished. 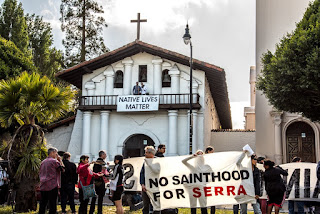 And the soldiers—some excons-turned soldiers
sent up from central Mexico--were definitely not a good representation of the Christian religion nor of civil society.

Some soldiers used to chase natives and lasso young women and then rape them.

#3 Father Serra—and evidently many other Franciscan monks—beat, whipped, and abused their own bodies, too. Really sickening.

Hackel explains that such behavior was probably why Serra whipped natives. If it was important for a priest to beat and lash his body into submission, then, surely, natives needed the same treatment.

And, also, since Serra considered natives his "children," he was following standard practice in Spanish society of how to punish wayward children.

But most of these behaviors were contrary to native Californians, who didn't abuse their children.

#4 Serra and the other monks were caught up with the incessant adoration of the Virgin Mary and praying to Roman Catholic saints. Serra claimed miracles had been performed by Mary and by St. Joseph, the travelers' saint.

#5 Serra and the other Spanish missionaries gave very strong veneration to their dead leaders' bones—especially the thigh bone of one former Franciscan saint. Very weird.

What is this with many religions’ obsession with the bones of their leaders!? Even Buddhists still venerate a toe of the Buddha! Religions are very so bizarre and irrational.

Of course, I realize the truth of the statement in Not Without My Daughter, “That every religion not your own seems weird.”

#6 I will grant that Serra, as Hackel emphasizes, was an amazingly determined, dedicated, brilliant, courageous zealot and that he did seek to protect the natives from some of the worst abuses of the Spanish System. 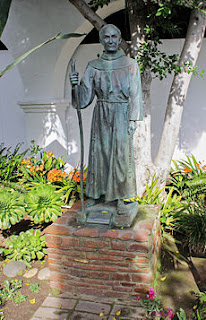 But at other times, Serra was an overbearing, abusive, intolerant ‘father’ (as he considered the Indians his “children”).

He, also called the natives "infidels" and, so, besides all the bad actions already mentioned, he opposed the Spanish Governor’s efforts to move acculturated natives into voting for their own leaders.

#7 Serra liked to have total control of the missionary endeavor. In fact, he went outside of Franciscan and Spanish official channels, and met with the Viceroy of Mexico in order to counter the Spanish ruler of Alta California who he opposed.

When Serra was ordered to not communicate with the Viceroy again, he used Catholic theological 'reasoning' to interpret that to mean he couldn't send official documents to the Viceroy, but that he could still send personal letters!

#8 Serra, as has been the case of so many famous human leaders, was a zoo of contradictions:

"He stated that he was always obedient to his superiors, but...
he did largely what he pleased, with few checks on his own authority and actions beyond the narrow confines of his order and mission...

"He had a domineering personality but was bereft of an individual self; he was opinionated, strong-willed, determined, and passionately devoted to his life's work but was typical of his age in that he had no real identity of his own beyond his order."
ETC.
Junipero Serra, page 242

Serra may not have been has bad as Columbus who enslaved and slaughtered so many "Indians," however Serra doesn’t deserve to be called “California’s Founding Father.”

BUT then neither do any of the other manipulative, oppressive, destructive leaders of early Alta and American California. Hackel writes that the Americans were even more cruel and destructive when they took over, ousting the Mexicans.

Several times I almost quit this negative tome and returned it to the library unfinished, but I hiked on to the conclusion and am thankful I did. But I doubt that I will ever visit a California Mission with as much appreciation as I used to do.

And I now remember my long hours spent with our kids helping them do their Mission Projects in 4th grade, and feel ashamed.

Live for the Light of Truth, Goodness, Justice, Reason, Math, and Beauty,