OBSESSION with a Border Wall


REGARDING the current OBSESSION with building a BORDER WALL and evicting law-abiding undocumented workers, and shouting "America First!" (How self-centered:-(:
What is needed ISN'T a border wall. 3 months ago, I drove a long the border of the Southern U.S. for hundreds of miles.
Already in many areas, a wall already a exists and where there are roads, border posts control entry.
And there are lots of Border Patrol vehicles patrolling areas up to 100 miles inland from the border!!

BUT we don't lock our doors and build high walls to keep out most others such as foreign students, neighbors, diligent workers, courteous strangers, etc. 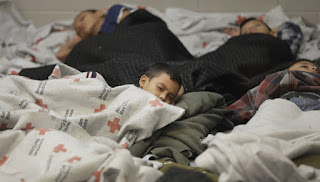 On the contrary, we--if we are caring individuals--welcome others, of all shades, colors, and nationalities.

What is needed is openness, compassion, the realization that all humans are equal, that every person is of inherent worth.

If foreigners who come to America, reject Islamic Sharia and accept freedom of speech and religion, our Bill of Rights, then
I think we ought to admit at least as many such refugees as Germany, 1 million.

As for the millions of Americans who are pushing for exclusion, for more border walls, and putting themselves "first":

My response is that we obviously have very different life experiences. And very different ethical values.
One of the best students in my years of teaching was an undocumented alien.

(Many of the very worst non-working students were native-born whites. Ought we to send them over our borders;-) Just a satirical comment. Probably, they had received poor nurture as children.)

Most of the years of teaching, I spent helping minorities in learning to study. We even had a joke in the classroom, since I was often the only non-minority, that I was the "token honky";-)

Plus, my area of expertise is American literature-history. Read of other tragic periods in American history when these anti- movements against the Chinese, the Filipino, the Mexican, the Irish, etc. flourished.

Nationalism is almost as bad as racism. In actual historical situations it is usually worse.
American nationalism caused far more slaughter, harm, and abuse than even slavery, as inherently evil as that unjust, immoral institution is.
Say NO to self-centered "America First!"

--
Photo: "Detainees sleep in a holding cell at a U.S. Customs and Border Protection processing facility, on June 18, 2014, in Brownsville,Texas. Brownsville and Nogales, Ariz. have been central to processing thousands of unaccompanied children who have entered the country illegally. Photo by Eric Gay-Pool/Getty Images