Southern Whites Got Back in Control Only 5-12 Years After Being Defeated in the Civil War! How? Why?


Try to imagine other oppressive, intolerant leaders regaining total control after being severely defeated only 5-12 earlier: 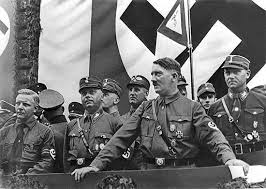 Imagine the Nazi leadership taking back control of the German government in 1950-57, only 5-12 years after WWII!

Imagine the Japanese Warlords taking back control of Japan in 1950-57 after only 5-12 years!!

So how and why were ex-Confederate leaders able to do the nigh impossible almost immediately after the Civil War where they had just been decisively defeated?

HERE’S the HOW:
Insurrection groups such as the Redeemers, Red Shirts, KKK, Knights of the White Camelia Southern ‘gun’ clubs, etc. intimidated, attacked, and often slaughtered Negroes who sought government positions, who sought to exercise their right to vote, who sought to decide when and where they would work and live.

Except for the Grant administration's crushing of the KKK in 1871, the Union didn't stop Southern violent groups from their actions.

Even the occupying Union Army in 1865-66 introduced Black Codes to try and get the Southern economy going again and to force former slaves to work.

Gone were the Union's promises of 4 acres and a mule to former slaves as promised only a few months before!

Then when Southern Political officials—former Plantation owners, slave owners, many of them former Confederate soldiers, etc. came to power, they basically, reintroduced the master-slave relationship toward Negroes, even though technically slavery was illegal.

Heck, in 1878, the U.S. government even passed "a law forbidding federal troops from intervening to protect African-American voters from harassment and intimidation."

From State of Mississippi Code, 1865:

“Section 2. Be it further enacted, that all freedmen, free Negroes, and mulattoes in this state over the age of eighteen years found on the second Monday in January 1866, or thereafter, with no lawful employment or business, or found unlawfully assembling themselves together either in the day- or nighttime, and all white persons so assembling with freedmen, free Negroes, or mulattoes, or usually associating with freedmen, free Negroes, or mulattoes on terms of equality, or living in adultery or fornication with a freedwoman, free Negro, or mulatto, shall be deemed vagrants; and, on conviction thereof, shall be fined in the sum of not exceeding, in the case of a freedman, free Negro, or mulatto, $150, and a white man, $200, and imprisoned at the discretion of the court, the free Negro not exceeding ten days, and the white man not exceeding six months.
Section 5. Be it further enacted, that all fines and forfeitures collected under the provisions of this act shall be paid into the county treasury for general county purposes; and in case any freedman, free Negro, or mulatto shall fail for five days after the imposition of any fine or forfeiture upon him or her for violation of any of the provisions of this act to pay the same, that it shall be, and is hereby made, the duty of the sheriff of the proper county to hire out said freedman, free Negro, or mulatto to any person who will, for the shortest period of service, pay said fine or forfeiture and all costs.”
https://www.britannica.com/topic/black-code

Historian Samuel McCall: They "established a condition but little better than that of slavery, and in one important respect far worse.”

The main reason why Southern Whites so quickly got back into dominating power without changing their racist, oppressive, intolerant views is because of their CALVINIST THEOLOGY
which the large majority of Southerners subscribed to avidly! 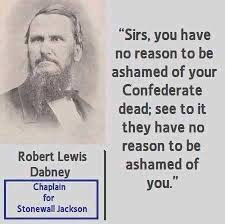 R.L. Dabney, Southern Theologian, Chaplain to Stonewall Jackson's troops. Dabney published a book even after the Civil War which argued that slavery was the will of God, the Calvinist God.


However before explaining that, it needs to be emphasized that there are many other factors, too, as to why Southern Whites were able to create a racist social order and oppressive state governments within 5 to 12 years of the end of the Civil War.

#1 Many Northerners had only supported the invasion of the South because they wanted to force the seceding states back into the Union. Other Northerners did want to end slavery, but they didn’t want Negroes living near them, or having the same rights as Whites.

Even Abraham Lincoln as late as 1864 still supported the view that all Negroes ought leave the United States and go somewhere else—Africa or the Caribbean. Lincoln considered Negroes inferior to Whites. Only a minority of Northerners were abolitionists and for equal rights for Negroes.

#2 Since the U.S. government almost immediately rejected giving former slaves land and supplies, the Union army occupying the South thought that it must deal with the millions of freed slaves, so it introduced the Negro Codes, even though they were grossly unfair to the Negroes.

And Northern states also increased their anti-Negro Codes. Many towns and cities became anti-Negro Sundown towns. There were still at least 10,000 sundown towns even in the middle of the 20th century!

#3 Reconstruction failed, largely because of the failure of the U.S. government to radically alter the nature of Southern beliefs and society.

#4 The U.S. government pulled its troops out of the South in 1877, way too soon and because of a devil’s deal with Southern racists in order to get Benjamin Hays elected president.
-
"Southern segregation of the races began soon after the Civil War ended. Although segregation was more flexible during Reconstruction, more rigid laws were passed after federal troops withdrew from the South. These laws, which became known as Jim Crow laws after the name of a minstrel from the 1800s, prohibited African-Americans from using the same facilities and services as whites. In 1875, Congress had passed a Civil Rights Act that made racial discrimination in public places, including hotels and trains, illegal. However, in 1883 the Supreme Court declared that law unconstitutional. The court reasoned that refusing to accommodate someone because of their race was not the same as slavery, and did not violate the constitutional amendments abolishing slavery. The decision paved the way for extensive legalized segregation in the South."
https://classroom.synonym.com/happened-federal-troops-withdrew-south-1877-23217.html
--

Notice even now in the present how quickly major national events can change because of differing philosophies. Despite 8 years of fairly moderate Obama-type politics, suddenly in 2017, the opposite side of the political spectrum came to power via the Electoral College (the Democrats won the popular vote by about 3 million). Then U.S. policy has swerved to fairly extreme right-wing views, statements, and actions under President Donald Trump.

And Donald Trump got elected partially because millions of white Evangelical (at least 81%) and Calvinists voted for and continue to support President Trump, despite his many immoral, unethical, unjust statements and actions.


Let us rise against injustice and inequality,

Posted by Daniel Wilcox at 2:11 PM