My Response: a 'tail' of 2 Divergent Christianities, 2 Different Spiritual Flights to the Good Flock, Friends


From Chuck Fager's intriguing--shocking, probably to most non-Catholics--account of his visit as a senior to a Catholic University in Denver, Colorado, 1959:
"To this end, it was announced one day that we would soon be treated to a field trip, all the way to Denver, to visit the nearest Catholic colleges: Regis, for men, run by the Jesuits... 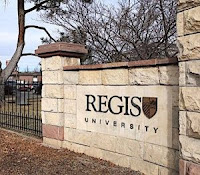 "I enjoyed the trip, though I was already clear that, as a budding atheist, wherever I went to college, it would be at a secular school. This resolve was greatly strengthened when we visited, of all places, the Regis library.

"I had long had fond feelings for libraries, and at first glance, the one at Regis seemed a fine specimen: well-lighted, relatively new, with many long open shelves. Open shelves of books to me embodied freedom of thought and learning, and its liberating possibilities. But something didn’t jibe with this appealing tableau. Behind the reference desk, my eye was caught by a large area enclosed by heavy mesh metal partitions, like chain link fencing but thicker, with a locked gate. Inside were more books; I could see the shelves through the mesh. 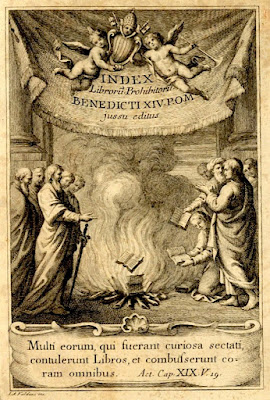 Were they antiquities? Precious manuscripts of historic value? They didn’t look like that.

"No. My question to a cheerful librarian got a straightforward answer: the enclosure was for books on the Index Librorum Prohibitorum: the Catholic Index of Forbidden Books.

"I stared at it in fascinated horror: of course I had heard of the Index. It was hundreds of years old. Where the Church was part of or protected by governments, it went hand in hand with censorship.
--
"A statue marks the place in Rome where Giordano Bruno was burned in 1600. He was held prisoner for six years before execution, but refused to recant his “heretical” views...But in 1959, there were more philosophers (Kant, Spinoza, and Sartre) on it than racy novelists, or for that matter, astronomers."

MY RESPONSE:
Chuck Fager's experience in Christianity as a teen (Roman Catholic) is so utterly different from my own (free-will Baptist), it shows, again as so often, that there isn't and never was just one Christianity, but many contradictory ones.

It's beyond my understanding that a Catholic university in 1959 would still have a jailed section of its library for some philosophy books!
Whew...Incomprehensible to a free-wheeling moderate fundamentalist boy as myself.

Of course, we Baptists had our own no-no's--no movies, no dances, no cards, no wine, no rock n' roll, etc. BUT I could read anything that I wanted, spent many an hour at the town library, school library, etc. During my senior year, I was into reading zen (Alan Watts), Kerouac, Aldous Huxley, etc.

I'm also shocked that Regis was run by the Jesuits! About the only fact I used to know about that Catholic movement was that it was very liberal, probably far more liberal than us Baptists.

What's intriguing is that while Chuck Fager and I grew up in such completely different religious backgrounds, like many other spiritual seekers, both he and I finally found our brood in the Friends.

What was that disjointed aphorism? Friends from very different brooded feathers flock together;-)