Coonrod ought to have separated Black Lives Matter as a very important call to justice and kindness and reconciliation and against racism, from the bad examples of some BLM leaders and protesters who by their calls for violence, and their vandalism, arson, and hitting 49 police officers in Chicago with heavy objects, etc. harm others and the movement. 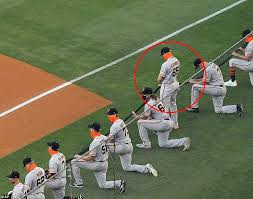 Maybe, Coonrod had heard statements such as this by Hawk Newsome, a leader of BLM of New York:
"If this country doesn’t give us what we want, then we will burn down this system and replace it.
All right? And I could be speaking figuratively. I could be speaking literally. It’s a matter of interpretation...“I don’t condone nor do I condemn rioting,”...Hawk Newsome said during an interview Wednesday evening on “The Story” with Martha MacCallum.
https://nypost.com/2020/06/25/blm-leader-if-change-doesnt-happen-we-will-burn-down-this-system/

We are living in tragic times now. Most humans are too ideological, too divisive and so many are turning to violence.

Thankfully, however, many are refusing to become ideological and divisive, but kneel, committed to the nonviolent ideals of Bayard Rustin, John Lewis, and other great Civil Rights workers.
--
FROM "...Coonrod becomes MLB’s Giant target for stance on Black Lives Matter movement"
https://www.thetelegraph.com/sports/article/Carrollton-8217-s-Coonrod-becomes-MLB-8217-s-15435047.php

"LOS ANGELES — Citing his faith as a Christian man and his desire to remain consistent in his beliefs, San Francisco Giants reliever Sam Coonrod explained why he didn’t kneel during a pregame moment of unity at Dodger Stadium Thursday.

“I meant no ill will by it,” the Carrollton native said. “I don’t think I’m better than anybody. I’m just a Christian. I believe I can’t kneel before anything but God, Jesus Christ. I chose not to kneel. I feel if I did kneel I’d be a hypocrite. I don’t want to be a hypocrite.”

"Prior to the playing of the national anthem on Opening Night, every player and coach from both the Dodgers and Giants held a long piece of black fabric, and all but Coonrad also took a knee. Coonrod held the fabric along with everyone else but remained standing.

"The moment of silence was intended to support the Black Lives Matter movement, which Coonrod said he has had difficulty embracing.

“I’m a Christian,” Coonrod said. “I can’t get on board on a couple of things I’ve read about Black Lives Matter, how they lean toward Marxism and said some negative things about the nuclear family.”
--

"Many are supporting Coonrod’s stance. Many are not."

In the Light of equality, justice, and reconciliation,

Posted by Daniel Wilcox at 8:29 AM