DEFINITION: "The terms equality and equity are often used interchangeably; however, they differ in important ways. Equality is typically defined as treating everyone the same and giving everyone access to the same opportunities. Meanwhile, equity refers to proportional representation (by race, class, gender, etc.)"
Winston-Salem State University

Equality is true and ought to always be lived by, but “equity” as popularly promoted at present isn't good or true. That certain groups, or races, or classes ought to be given special privilege and individuals who because of their class, or race, or group ought to be denied equality--that is wrong. It is a denial of classic liberalism to treat individuals primarily as part of a group, class, and race. 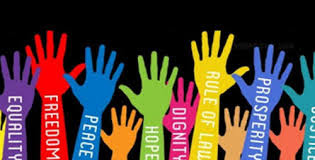 Too often that leads to inequality, injustice, misuse, abuse, unfairness, even divisive division, propaganda, Marxist actions, even hatred, false labeling of all individuals of a certain group or class or race as bad.

Heck, even though I began working and demonstrating against racial injustice long ago back in 1965 and though I support marriage for same sexual couples, etc., recently I was verbally attacked as being of “white supremacy” and of being “homophobic”!

Why?! Because I happen to belong to the white race, and am of the grouping that supports the nuclear family.

BLM and other such organizations (on the extreme left and the extreme right) instead of focusing on individuals, their inherent worth, their differences, etc., view society as competing groups. Two of BLM’s founders claim to be “Marxists.”

Contrary to the drum-beating of equity, the standards, for instance, for admission to a college ought to be the same for everyone!

To give preferential treatment to an individual who happens to be Black or poor or a woman or from a bad neighborhood is to treat him not as an individual but as primarily part of a race, a group, a class, a gender/sex.

This the sort of political propaganda that focuses on—blaming the current major society for the ills of the minority (even though those ills come from a variety of sources, including some of the individuals and their wrong choices within that grouping, besides racism, etc.).

However, this is not to say, that disadvantaged young adults ought not to be helped. Injustice in the past, immoral actions of the past, and so forth ought to be righted now.

BUT the way they ought to be helped isn’t by disadvantaging individuals who happen to belong to other groupings--white or Asian or middle class or male or from a stable, civil neighborhood.

There ought to be equal standards for all—equality.

Then beyond that equality--not disadvantaging a person just because he is white or Asian-- the government and society can still make additional efforts, plans, etc. to help those who have grown up disadvantaged.

For instance, instead of quotas, special privileges, or giving lower standards for individuals from disadvantaged backgrounds, those individuals who can’t meet the requirements can be given extra tutoring, extra help in getting tools such as computers, etc.

That way everyone is treated equally, but those who because of social and cultural injustice, poor circumstances, or abusive background, etc. are given extra help to meet and achieve the same standards.

Hopefully, balancing equality with extra help for those in need will help achieve the good, true, and just.

In the Light, Dan Wilcox

Posted by Daniel Wilcox at 7:03 AM


Religion has been emphatically embodied, not in speculative theories, but in practical righteousness, in active virtues, in reverence to God, in benevolence to man- the latter being the only sure test of the former.
--Thomas M'Clintock