IF Not putting Our Selves FIRST...

If NOT putting itself First, What Is One of the Central Purposes of a Nation, our nation the U.S.A., every nation?

One of the central purposes of a nation is BE A BLESSING TO OTHERS, ESPECIALLY THOSE IMPOVERISHED, PERSECUTED, OPPRESSED, MISTREATED... 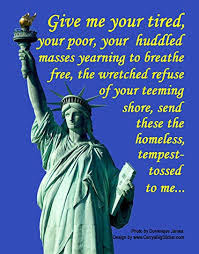 A nation exists NOT to put itself FIRST.

contrary to what former President Trump claims and multimillions of Americans including 81% of Evangelical Christians still believe.

A nation can protect its citizens NOT by building huge walls, NOT by demonizing refugees, NOT by being self-centered.

In the Light of compassion, generosity, hope, and help,

Posted by Daniel Wilcox at 9:05 AM