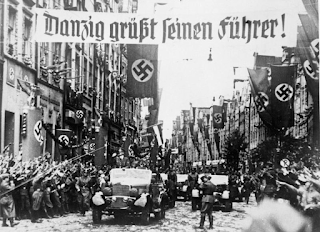 "In May 1933, Mennonites delivered Adolf Hitler the only country-wide majority he achieved in an open election. Four months after Hitler became Chancellor of Germany at the head of a short-lived coalition with another party, the Nazis won an outright majority during elections in a nearby microstate known as the Free City of Danzig.

Located in what is today northern Poland, Danzig had a substantial Mennonite population. Mennonite ballots pushed the Nazis over the 50 percent threshold in the popular vote. A parliamentary majority allowed the Nazis to rule Danzig alone, and no fair state-wide elections were held again."
Whew...

At times in my life, when I couldn't attend Friends Meetings, my wife and me attended Anabaptist churches (Mennonite and Brethren in Christ) because we thought it was probably the most Jesus-centered denomination.

However, this insightful study by historians, HITLER'S MENNONITE VOTERS, documents that some European Mennonites became deluded by nationalism, selfishness, pro-war views, and even supported forced-labor of minorities including Jewish people!

There is a striking lesson for all who seek the Good, the True, and the Just.

The study reminds me of how disheartening it was when I studied Quaker history and learned that for a time George Fox supported the very immoral and unjust Puritan leader, Oliver Cromwell.